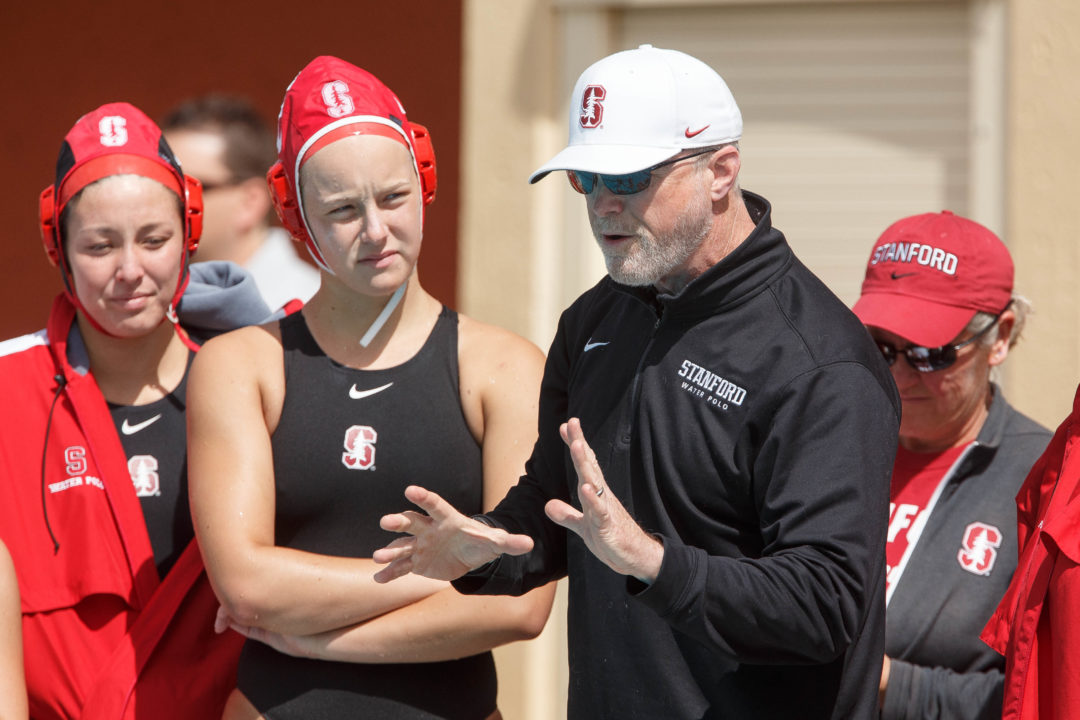 After Friday’s quarterfinals, all that remain in the NCAA Water Polo Tournament field are the top four seeds, all representing the Mountain Pacific Sports Federation. #1 USC and #2 Stanford are looking to set up a rematch of the 2018 final with Saturday victories. Current photo via David Elkinson/Stanford Athletics

After Friday’s quarterfinals, all that remain in the NCAA Water Polo Tournament field are the top four seeds, all representing the Mountain Pacific Sports Federation.

The same four teams made the semifinals in 2018 with USC eventually topping Stanford in the championship match. Last year, however, the Trojans faced #4 seed UCLA, while the #2 Cardinal took on #3 seed Cal. The opponents are swapped in 2019 with USC meeting Cal and Stanford playing UCLA with a finals berth on the line.

USC and Stanford have split the last nine titles.

The conference also has boasted the national runnerup all but one of the last 18 years (2004 – Loyola Marymount).

The Trojans (27-1), which are seeking the program’s first back-to-back NCAA titles, bring a seven-game win streak into the semifinals, wrapping the regular season with six wins plus Friday’s NCAA first round 14-8 win over UC San Diego.  Nine players chipped in goals to pace the Trojan offense against the Tritons.

Cal (17-8) is looking to make its first NCAA title match appearance since 2011, when it lost to Stanford 9-5. The Bears earned a spot in the semifinals for the third straight year by besting Hawaii 17-13 on Friday. Five players notched multi-goal efforts against the Rainbow Wahine, including four goals apiece by Brigit Mulder and Emma Wright and a hat trick by Kitty Lynn Joustra.

Key Players: In the previous two meetings with Cal, Maud Megens has cashed in a pair of hat tricks, leading to a team-high 65 goals. Paige Hauschild has found the back of the 46 times in 2019, followed by Alejandra Aznar (39), who registered a hat trick to lead the Trojans in Friday’s quarterfinal victory.

In the goal, Amanda Longan has made 239 saves in 25 appearances, while allowing 96 goals (3.84 goals against average). Longan made six saves and allowed just four goals in three quarters of work vs. UC San Diego on Friday. The Trojans have allowed just 4.46 goals per game in 2019, while racking up 13.82 scores per game.

For the Bears, Emma Wright has put in a team-best 66 goals, including Friday’s four, while the team has registered 10.76 goals per game. Brigit Mulder upped her tally to 40 goals with four vs. Hawaii on Friday. Kitty Lynn Joustra’s hat trick pushed her to 33 goals on the season. The trio had help from four other scorers on Friday. Looking back at the previous two meetings with USC, Wright and Mulder have managed three goals apiece.

In goal, Madison Tagg has carried the bulk of the load, allowing 6.88 goals per game in 627 minutes. Cassidy Bell made three saves in the final three minutes of Friday’s matchup with Hawaii and has allowed just 4.78 goals per game in her nine appearances.

Pick: USC. It is tough to see Cal breaking through and pulling an upset, but with the familiarity of the teams, anything can happen. Longan is the X-factor as she has repelled shots throughout the season and stopped the Bears offense in the previous two meetings. That 9-8 decision on Feb. 23 gives Cal hope for an upset, though. The Bears will need to utilize multiple scorers and create opportunities on power plays and penalties to have a chance.

UCLA (24-6) is making their eighth appearance in the semifinals and second in a row under coach Adam Wright, after topping #6 Michigan 13-7 on Friday. The Bruins are looking to make their first title match since 2017, when the team was runnerup to Stanford.

Key Players: Stanford’s top scorer Makenzie Fischer (80) recorded just two goals in the team’s 18-9 drubbing of Pacific on Friday, but her mere presence in the pool opens the door for her teammates like sister Aria Fischer (51) and Sarah Klass (42). Madison Berggren, who turned in four goals vs. the Tigers, had scored just 23 goals coming into NCAAs.

In terms of matchups with UCLA, Makenzie Fischer has done the most damage, putting in five goals in each 2019 meeting. Kat Klass added three scores and Sarah Klass notched two scores in the first matchup.

In goal, Emalia Eichelberger has allowed 7.48 goals per game in 54.5 quarters of work for Stanford. Walsh made her ninth appearance of the year on Friday vs. Pacific and recorded seven saves to boost her season tally to 57.

Maddie Musselmann drives the ship for UCLA, putting in 54 goals on the season, including a team-leading four in Friday’s win over Michigan. Lizette Rozeboom also notched four scores against the Wolverines, upping her tally to 25 on the season, while Bronte Halligan (30) turned in a hat trick. Just two other players scored in the game for the Bruins. Not to be forgotten is Val Ayala and her 34 scores.

Against Stanford, Musselmann managed two scores in both regular season meetings. Halligan and Ayala put in a goal apiece in each contest.

Carlee Kapana made eight saves in 30 minutes of action vs. Michigan, while allowing seven goals. For the season, she has allowed just 6.75 goals per game.

Pick: Stanford. While UCLA proved it could play with the Cardinal in the teams’ April 6 meeting, the chip on Stanford’s shoulder and hunger for a rematch against USC will drive the team past the Bruins. It may be a close one, but only if the Bruins can find a way to shut down Makenzie Fischer. Even still, Aria Fischer has turned it on offensively as of late and will offer a strong second option if Makenzie can’t find the back of the net.