Milak Is The Man, As The Hungarian Teen Takes 2Fly Crown In Budapest 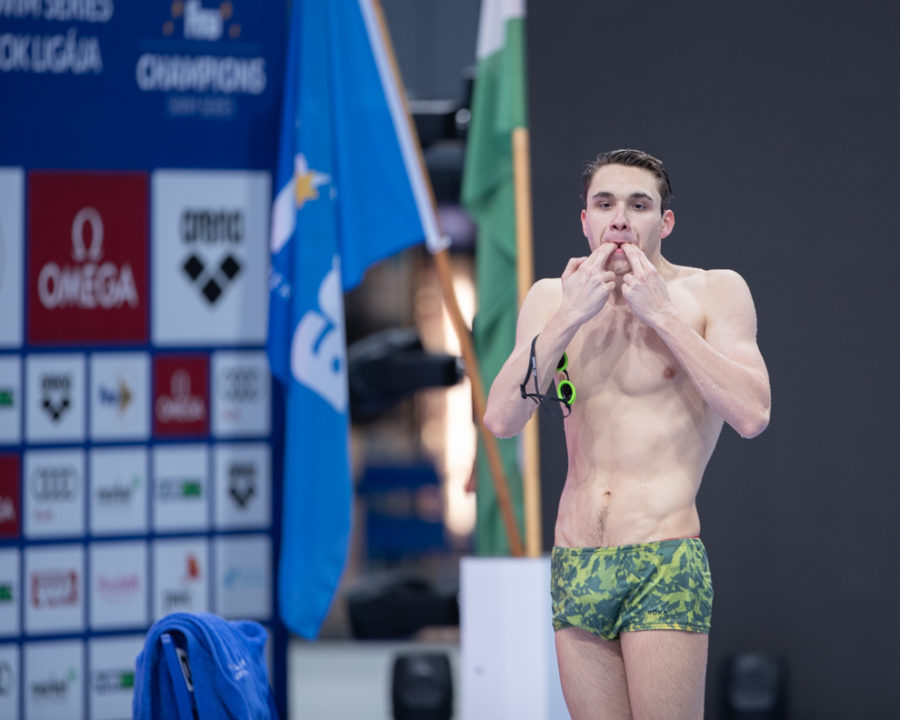 The reigning World Junior Record holder and Hungarian National Champion Kristof Milak put on a show in front of his home country while competing on night 1 of the FINA Champions Series. Current photo via “Rafael/Domeyko Photography”

The reigning World Junior Record holder and Hungarian National Champion Kristof Milak put on a show in front of his home country while competing on night 1 of the FINA Champions Series.

This 2nd stop of the 3-meet circuit is taking place in Budapest, so the crowd was extra enthusiastic with the men’s 200m fly race as the 2 of the 4 competitors hail from Hungary. Milak took the gold and top monetary price of $10,000 in a 1:53.64 stunner, establishing his 4th fastest outing ever in this event.

Milak sat in 2nd place after the first 100m, led by South Africa’s Chad Le Clos. Le Clos busted out a 54.58 opener, only to fade to 3rd in a final time of 1:55.95, characteristically looking around at the field all the while.

Surprising Le Clos for silver was Japan’s Masato Sakai, the 23-year-old Japanese Olympic silver medalist who fell just hundredths shy of Michael Phelps’ gold in this race in Rio. Look for a follow-up post on Sakai’s performance shortly, as his 1:55.40 runner-up time is a season-best for him.

After Le Clos in 3rd, Laszlo Cseh clocked 1:56.83 for 4th, still a very respectable time for the never-say-die 33-year-old veteran who will be competing in Gwangju in the 50m and 100m distances of this discipline at the World Championships.

Going back to Milak, the 19-year-old’s WJR sits at 1:53.79 from 2017 and the ace recently put down another wicked-fast performance of 1:53.19 at the Hungarian Nationals this past March. That outing remains as the top time in the world this season and sets the Hungarian up as the man to beat in Gwangju.