Top 4 Seeds, All From MPSF, Move on to NCAA Women’s Water Polo Semifinals 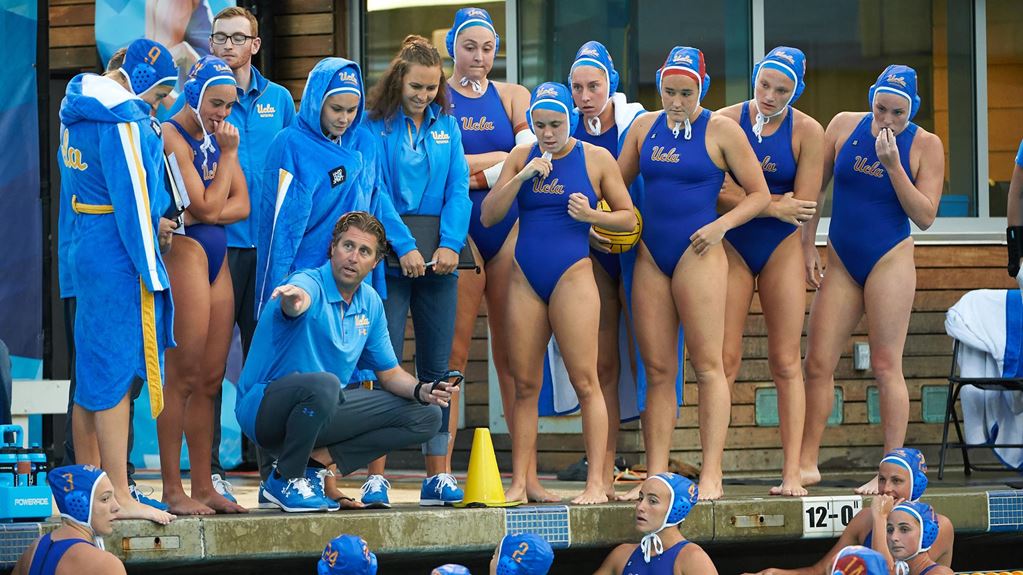 The top four seeds, all from the Mountain Pacific Sports Federation, advanced to Saturday's NCAA Tournament semifinals with wins on Friday in Palo Alto, Calif. #1 USC will now meet #4 Cal and #2 Stanford will face #3 UCLA with a spot in the championships match on the line. Current photo via UCLA Athletics, Don Liebig

The top four seeds, all from the Mountain Pacific Sports Federation, advanced to Saturday’s NCAA Tournament semifinals with wins on Friday in Palo Alto, Calif.

#1 USC will now meet #4 Cal and #2 Stanford will face #3 UCLA with a spot in the championships match on the line.

The top scorer of the day came from #5 Hawaii as Elyse Lemay-Lavoie netted six goals. 24 other players managed multiple scores, including 10 hat tricks.

Nine players turned in goals, led by Alejandra Aznar’s hat trick and three other multi-goal efforts, to lead the defending national champions from USC to a 14-8 win and a spot in Saturday’s NCAA semifinals.

USC (27-1) led 6-4 at halftime and poured on six unanswered goals in the third period to build enough cushion in the victory. UCSD (22-14) outscored the Trojans 4-2 in the final stanza, but came up short.

Amanda Longan split time with Holly Parker in the goal for the Trojans, each allowing four scores. Longan made six saves for her part, while Parker stopped one shot.

Grace Pevehouse did all she could for the Tritons, netting a career and game-high five goals. Shelby Stender, Chanel Schilling and Sydney Boland followed with a goal apiece.

How It Happened: UCSD scored first on a power play goal by Pevehouse with three minutes left in the opening period. Megens answered 28 seconds later for USC. Aznar (1:47) and Mammolito (power play at 0:53) gave the Trojans a 3-1 edge after one stanza.

Hauschild (7:04) made it 4-1, but Schilling capitalized on a power play at 4:56 and Pevehouse netted a penalty shot at 3:34 for UC San Diego to narrow the gap to one at 4-3. Three more goals followed before halftime: USC’s Stein at 2:24, UCSD’s Pevehouse at 1:05 and a powerplay score for the Trojans by McIntosh with just 36 ticks left on the clock.

Both teams changed goalkeepers to start the fourth period. UCSD was the first to strike as Stender netted a powerplay goal (6:58). Just 26 seconds later (6:32), Bakoc pushed the margin back to eight at 13-5. Stein notched USC’s final tally on an even strength goal with 5:45 to play. The Tritons made a run, scoring the final three goals of the game, but could not finish the comeback. Pevehouse got things started with a powerplay goal (5:22), then added an even strength score (3:43). Boland put in one final goal at 2:21 to bring about the final result (14-8 USC). UC San Diego had a shot block and one saved over the final two minutes.

A second half surge was the difference for Cal in a 17-13 win over Hawaii in Friday’s quarterfinal matchup. After an 8-all tie at the half, the Bears outdid the Rainbow Wahine 9-5 in the final two stanzas.

Key Players: Hawaii’s Elyse Lemay-Lavoie was the top scorer in the game with six goals on six shots. She had help from five other scorers, including multi-goal efforts by Alba Bonamusa Boix (2) and Maxine Schaap (2). Femke Aan, Carmen Baringo and Irene Gonzalez chipped in a goal apiece.

Brigit Mulder and Emma Wright put in four goals each for Cal, while five others chimed in with goals. Kitty Lynn Joustra registered a hat trick, while Sarah Siepker and Elli Protopapas put in two goals apiece. Hannah DeRose and Georgia Bogle rounded out the scoring.

Each team utilized two goal keepers in the contest. Madison Tagg made 10 saves to counter 13 goals allowed for Cal. Cassidy Ball added three saves for the Bears. Molly DiLalla gave up 11 goals and made three saves for Hawaii, while Bridget Layburn allowed six goals to go with one save in a relief effort.

The Bears scored three in a row to start the third period: Joustra (7:18), Siepker (6:24) and Mulder (power play at 5:02). Hawai’i called timeout and changed goalies, putting in Layburn to replace DiLalla. A powerplay goal by Lemay-Lavoie (4:26) sparked a three-goal flurry, two for the Rainbow Wahine (also Schaap at 3:39) and one for the Bears (Protopapas at 4:07) bringing it to 12-10 Cal. Bonamusa Boix had UH back within one with an even strength score at 2:47, but soon after Mulder made good on a power play (2:14) and Sipeker (0:24) extend the Bears’ lead to three (14-11) with one period remaining.

Wright netted a power play goal (7:18), DeRose put in another score 30 seconds later (6:49) and Protopapas finished off the Bears’ scoring with another powerplay tally (5:48). Down six at 17-11, Hawaii peppered Cal with four shots, before Lemay-Levoie came through on a powerplay to give the team hope of a comeback. Bonamusa Boix added her second goal with 2:28 left, prompting a goalkeeping switch for the Bears. Cassidy Ball made three saves down the stretch to seal the Cal victory.

Stanford (21-2) piled up 10 goals in the first two stanzas and never looked back in a dominant 18-9 victory over Pacific in the NCAA first round.

Both teams took 32 shots, but Stanford made more than 56 percent of its chances to just 28 percent for Pacific.

Key Players: Aria Fischer and Madison Berggren accounted for half of the Cardinal’s 18 goals with five and four respectively. Madison Stamen, Kat Klass and Makenzie Fischer netted two goals each, while Mackenzie Wiley, Sarah Klass and Chloe Harbilas also got in on the scoring action. Makenzie Fischer notched her 200th career goal at 3:43 in the first period, making her just the sixth Stanford player to reach the milestone.

Six players found the back of the net for Pacific led by two-goal efforts by Kyra Christmas, Viktoria Szmodics and Savannah Fitzgerald. Truly Dorland, Viktoria Tamas and Anna Martinez do Amaral added a goal apiece. Szmodics wrapped her Tiger career as the ninth player in program history to record 150 goals.

The Stanford goalkeepers combined to make 10 saves, while allowing nine goals. Emalia Eichelberger earned the start and allowed two goals to go with three saves and two steals before exiting for Thea Walsh in the second period. For her part, Walsh made seven saves and allowed seven goals.

Clara Vulpisi gave up all 18 goals for the Tigers, but made seven saves. Samantha Pfaff made one save in her time between the pipes.

How It Happened: Stanford netted five goals in the opening period, beginning with even strength scores by Harbilas (6:18), Aria Fischer (5:40, 2:41 and 2:05) and Makenzie Fischer (3:43). Pacific finally broke through with 33 seconds remaining on the hand of Dorland.

Just 15 seconds into the second period, Christmas put in a powerplay goal for Pacific. The Tigers took a timeout and Stanford head coach John Tanner was issued a yellow card 20 seconds later. Tanner then pulled goalkeeper Eichelberger in favor of Walsh, who promptly made two save. Makenzie Fischer (6:03 and Sarah Klass (4:43 powerplay) helped the Cardinal cause with a pair of goal, before Pacific got its first ball past Walsh care of Szmodics (4:21). Kat Klass (2:51) and Berggren (1:50) poured on two more goals to make it 9-3 Stanford. Christmas (0:43) and Aria Fischer (0:27) traded goals to wrap up the first half.

Pacific switched goalies in hopes of stopping the bleeding and allowing the offense to mount a comeback as Pfaff took over for Vulpisi. Wiley tested Pfaff in the first minute and netted a powerplay goal (7:26). Stamen upped the margin to 11 less than a minute later (6:43). Martinez do Amaral made good on a power play opportunity for Pacific (6:15) and Fitzgerald followed (4:37) to cut the margin to single digits (17-8). Stamen put in the final goal for Stanford with 3:30 remaining. Fitzgerald netted one more goal for the Tigers at the 3:03 mark, but the team’s final two shots were left begging.

UCLA (24-6) finished off an MPSF quarterfinal sweep with a 13-7 win over #6 Michigan (23-9) to wrap up Friday’s NCAA action. The Bruins led 8-5 at the half and rounded out the victory with a final 5-2 push, while shutting the Wolverines out in the final period.

UCLA made more than half of its 25 shots (13), a 52 percent success rate. The Wolverines took more shots (31), but could only push seven past the Bruins keepers (22 percent).

Maddy Steere and Julia Sellers put in two goals each to pace the Wolverines. Sofie Pontre, Abby Andrews and Maddie O’Reilly found the back of the net once each.

Carlee Kapana made eight saves for the Bruins, while allowing seven goals. Jahmea Bent stopped the lone shot she faced.

How It Happened: Michigan struck first with an Andrews goal just over a minute in (6:57). A powerplay strike by Musselman (5:52) leveled the score. Steere gave the Wolverines the edge again at 2:27, but a powerplay brought things even again at 2:10 as Rozeboom notched her first goal. Sellers countered for Michigan (1:38), but UCLA grabbed its first lead with goals by Rozeboom (1:21) and Halligan (0:16) as the stanza ended.

The Wolverines were within two once again as Pontre netted the first goal of the third period (6:15). The back and forth swing continued as Halligan grabbed a power play goal for UCLA (5:38) and Steere put in a penalty shot for Michigan (5:26).  Whitelegge gave the Bruins a 10-7 lead with under a minute to play (0:48).

Rozeboom scored an insurance goal for UCLA just 30 seconds into the final stanza (7:28) and a penalty shot by Musselmann upped the advantage to five at 12-7 two minutes later (5:18). Rozeboom added one final tally on a powerplay with 4:11 to go. With the game well in hand, the Bruins put Bent in the goal for the final 1:19.