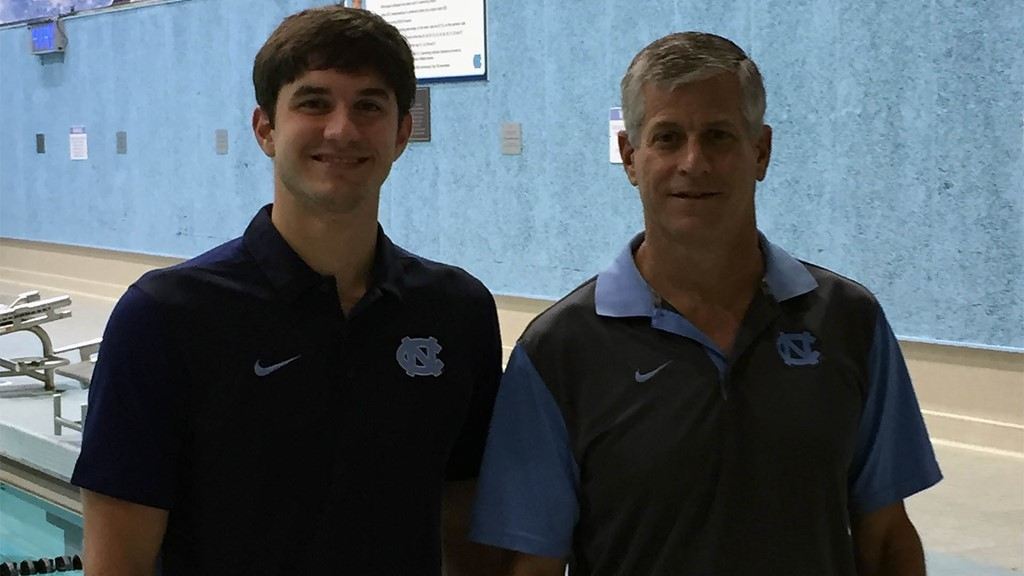 UNC assistant Michael Baric (left) has been an administrative assistant for the Tarheels since 2016. Current photo via UNC Athletics

Raleigh, North Carolina native Michael Baric has been hired as a full-time assistant coach, the program announced on Friday, effective immediately. Baric previously worked as an administrative and operations assistant since 2016.

This is Baric’s first college coaching job since graduating from nearby University of North Carolina at Wilmington (UNCW) in 2014 with a degree in history with a minor in psychology. He previously worked as a manager for the University of Florida while working on his master’s degree in sports management.

While at UNCW, Baric was a captain of the men’s team as both a junior and a senior, and he interned with the athletic department during his last year there. He set school records in the 100 back, 200 breast, 200 IM, and earned 11 All-CAA honors in the pool. He also won the Seahawk Award for character, leadership and commitment to the swimming team as a senior.

Baric, while new to college coaching, does have experience at the club level – having worked with the Marlins of Raleigh and the Gator Swim Club. He continued training after completing his NCAA career and qualified for the 2016 U.S. Olympic Trials while swimming with Wolfpack Elite Swim Club – the post-grad group based out of rival NC State’s program.

UNC opened their season last week against Georgia, with both the men’s and women’s teams losing. The UNC women were 17th at NCAAs last year with 73 points, while the men placed 36th with 6 points.

Congrats Michael! Please say hey to your dad. We swam together at WAC!

I heard Adidas is paying his salary.

Ok I find this story of this hire quite ironic. A Chapel Hill Resident who grew up swimming for NCAC, UNCs club team, decided to swim after college and go to trials. The irony is he didn’t decide to train at UNC, he decided to train at NC State. What does that tell you?

His father swam at NC State

He was training with Todd Desorbo who was a coach while he was at uncw. Its not ironic at all.