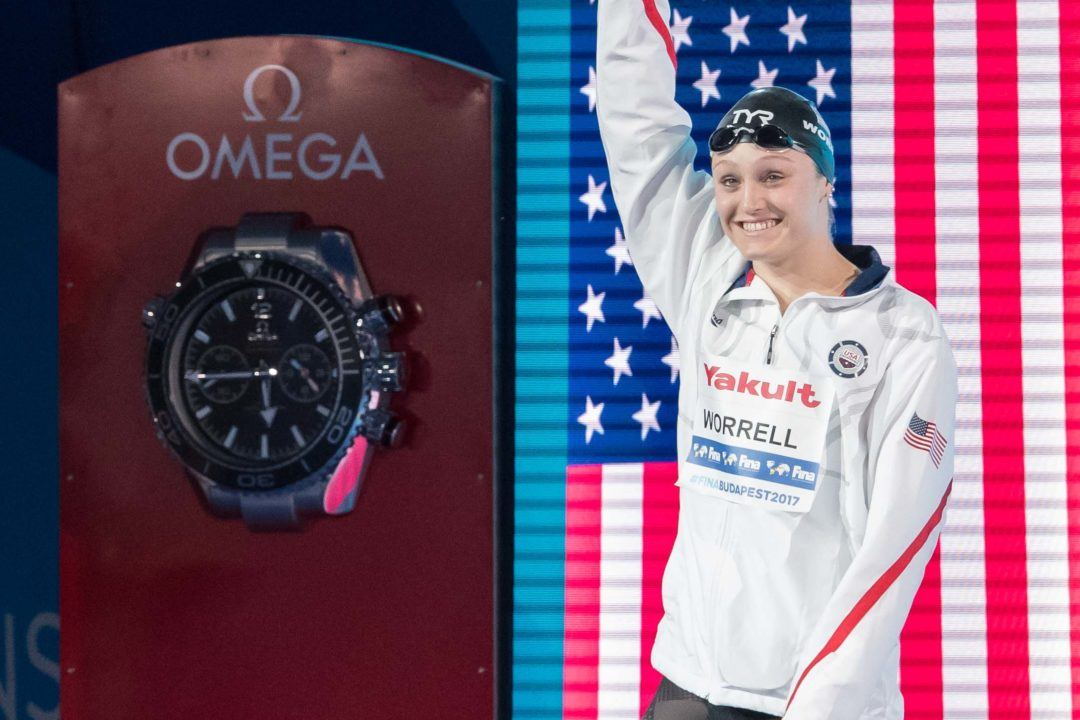 After seeing the lineups for this morning’s mixed medley relay, it’s no surprise that the U.S. team broke the world record in the prelims.

100 back bronze medalist and 2016 Olympic champion Ryan Murphy led them off in 52.34, a time faster than the gold medal winning time last night (though he had open water, and lead-off times in mixed events don’t officially count).

They then followed with individual medalists Kevin Cordes and Kelsi Worrell, rather than going with Trials runners-up Cody Miller and Sarah Gibson. Cordes split a solid 58.95, and Worrell followed up with a 56.17 on fly. Mallory Comerford, who set an American Record leading off the 400 free relay, anchored in 52.82 to give them a time of 3:40.28.

The swim breaks Great Britain’s world record of 3:41.71, set at the 2015 Championships when the mixed relays were first introduced on the LC World Championship stage.

Expect the U.S. to sub-in Matt Grevers and Simone Manuel for Murphy and Comerford in the final, while keeping on Cordes and Worrell. The Australians finished 2nd in 3:44.13, and have many potential substitutions to make including Mitch Larkin on back, Emma McKeon on fly and Bronte Campbell on free. Canada (3:44.46) and Great Britain (3:44.79) qualified 3rd and 4th.

Wouldn’t it be faster to switch Cordes with king, and worrell for dressel? While keeping Murphy and Comerford

Can NCAA athletes receive the WR bonus while maintaining eligibility?

My guess? NBC will tell the coaches to put Ledecky on the mixed medley relay final so she can go for 7 golds!!!

Wonder why FINA doesn’t recognize World Records for a backstroke leg in the Mixed Relay. Seems like the swimmer covers the requisite distance, adhering to all rules for the 100 back, in a sanctioned meet. Guess FINA doesn’t think the Mixed Relays are “real events”?

Question for which I don’t know the answer – would a time trial count for a world record?

Ah yes, forgot about the circumstances on that swim.

I would guess the reason they don’t could mixed medleys then is that a woman leading off could conceivably grab an advantage that couldn’t be had in a single-gender event in drafting off a man next to her.

Because it’s men vs women.

A man or woman breaking 100 free WR leading off 4×100 mixed free relay is also not recognized.

The only thing I can think of is that for the women they could potentially have the opportunity to draft off a male swimmer going 5-6 seconds faster. That could be considered an advantage when compared to the regular individual event. Back in 2007, Libby Trickett swam next to Phelps on the first leg of the mixed 4×100 Free at the Duel in the Pool. She went 52.99, the first women to break 53, but FINA did not count it as an official WR.

Change it up, let them all get medals…

There will be no real competition. No other country has the depth, end of story. The Olympic announcement came AFTER most teams had been selected and teams in these post Olympic years tend to be smaller. Therefore for most countries its a case of juggling your resources as to when it comes to relays and how you best employ any stars you may have. The mixed races just add to the equation. In two years time, almost certainly you will see more countries come out to play and the other stronger nations treat this race as seriously as any of the other Olympic relays they… Read more »