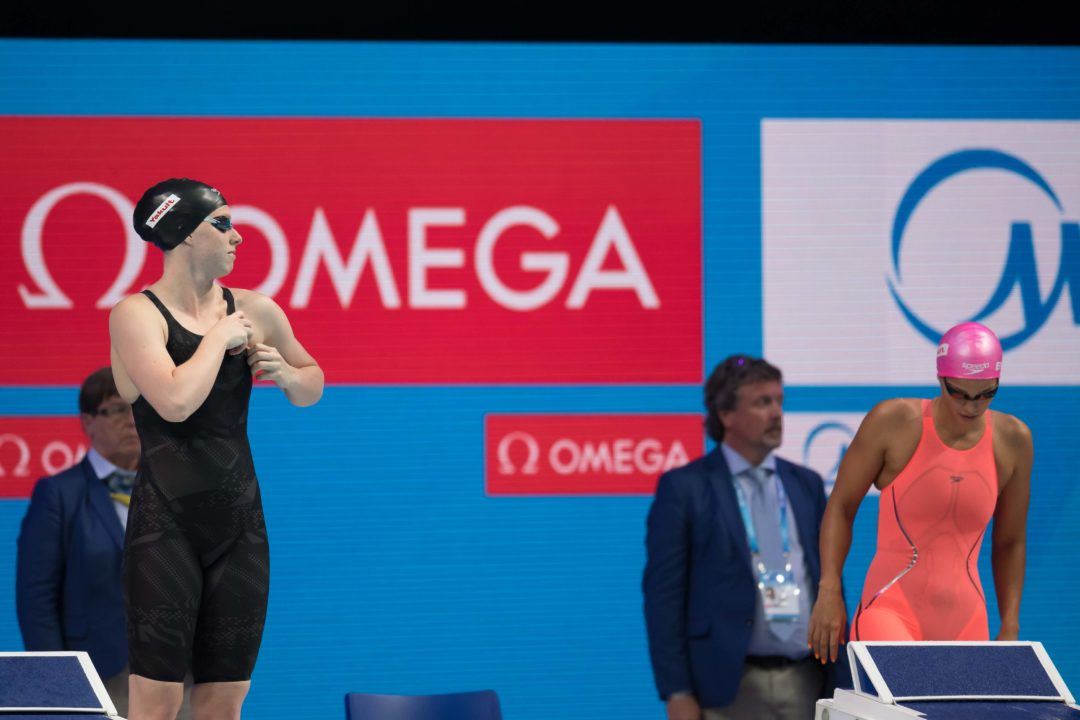 Lilly King and Yuliya Efimova battled in the 100m breast. King won and broke the world record, but what does the analysis tell us about this race start to finish? Current photo via Mike Lewis/Ola Vista Photography

One year ago, during the Rio Olympics, Lilly King and Yuliya Efimova faced off in the women’s 100 Breast. It was there a rivalry heated up: Efimova won the first semi-final, and raised a single finger to signal her position as number one. As Efimova waved that finger in victory from the pool, King, who was watching from the waiting room, wagged her finger back saying no — she was having none of it.

King had been very outspoken in Rio about the use of PED’s, arguing that anyone who used them should not be allowed to compete. Efimova had failed multiple drug tests and was only cleared to compete in Rio the day before the start of the games. But complaining about Efimova’s clearance to the games wouldn’t win King the gold; she had to beat Efimova in the pool. And so she did. King proceeded to post the fastest time in the semi’s, followed by a win in the final, and also set an Olympic Record in the process.

This race in Budapest was to be their rematch. Efimova crushed the semi-final, putting up a 1:04.36; 0.01 seconds off the world record and again raising that finger victoriously, while King finished second at 1:04.53. With a World Record hanging in the balance, these rivals were slated to swim side by side in the finals. Would the tension between them affect their performance? Would it drive them to perform better, or would they erupt in an epic meltdown in the pool? Let’s see what the metrics reveal.

In the first 50m of the final, Katie Meili, Efimova and Rūta Meilutytė all swam the same stroke count and had nearly identical speed, but there was a notable difference in DPS between the three. Efimova was unable to generate as much power from each stroke as Meili and Meilutytė, costing her valuable energy. However, her pullout was stronger than the other two, which allowed her to remain in the race at the 50m mark. When examining the differences between Meili and Meilutytė, time underwater also played a role — Meili had a slightly longer pullout, so her stroke rate was higher to produce the same number of strokes on the length, each being slightly shorter than Meilutytė’s.

King, in sharp contrast, swam the worst in terms of technical efficiency. She also registered the shortest time underwater of all competitors. This once again proves that the technically efficient approach doesn’t necessarily translate to a win. King was able to move at a faster speed, executing additional strokes at a faster rate, and retained enough energy to lead the pack as they moved into the final 50m of this race.

As they moved into the second half of this race, Efimova’s strategy shifted to resemble King’s. She drastically increased her stroke count, exceeding King’s by one, and simultaneously dropped her stroke rate and DPS. However, this shift did not work in Efimova’s favour. King was able to maintain a decent stroke efficiency with her higher stroke rate, and also had the stronger pullout of the two, saving her valuable time on the length underwater and helping her take home the victory. Conversely, Efimova’s stroke rate increase was accompanied by a drastic drop in her stroke efficiency. If she is to contest King’s dominance in the future, she’ll need to focus on increasing her DPS to generate more speed.

What is potentially even more interesting than the Efimova/King rivalry, is the power and endurance Meili displayed in the second half to steal the second place position. She was able to maintain the most speed while holding her stroke count much closer to the first length, and posting a much higher DPS than most of her competitors. We say “most” here because there’s a diamond in the rough in this race we haven’t yet acknowledged. Fifth place Jinglin Shi dominated the entire race in terms of DPS and technical efficiency, but was unable to produce enough speed to match her strong stroke. If she can speed up her stroke while maintaining the distance, she will be a real contender in this event.

Overall, this was a great matchup, in terms of both personalities and metrics. We saw that strong pullouts helped overcome shortfalls in stroke efficiency. We acknowledged that strong strokes are only valuable if you can produce the speed to match, and that fast strokes won out over what is technically considered to be more efficient. The moral of this story is that strategy has to be personalized; there is no one-size-fits-all approach which will ensure a win.

Interesting yet still flawed analysis. Efimova lost from the start. Watch the playback. She was VERY slow off the block and her underwater was not stronger on the start compared to her rivals. She lost ground on the turn as well. Sometimes reaction time and strength beat efficiency.

No discussion of the start? Yuliya was definitely slow off the block. I know that is often measured at high level meets. Saw it at Nationals at Georgia Tech last year.

Just noticed and responded to your question on the 100 fly page as well.

As mentioned on the 100m butterfly question, TritonWear calculates stroke rate based on the end of the swimmer’s first stroke, to the end of their last stroke. The difference between breaststroke and butterfly is when the stroke is considered to start. In breast stroke, the head entering the water marks the start of the stroke, whereas in butterfly, it is the arms entering which marks the beginning of a stroke.

I hope this helps clear things up for you. Feel free to hit us back if you have any more questions!