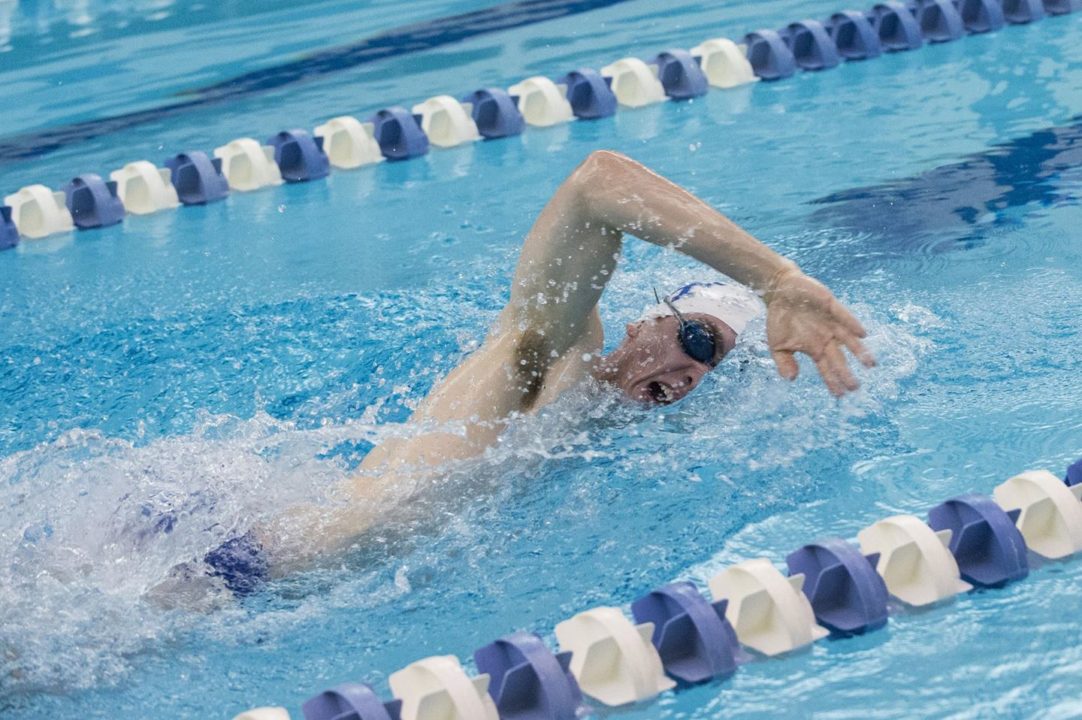 The Falcons won eight of the 13 events contested on the evening for 361 points, with Colorado Mesa (281) and Colorado School of Mines (217) second and third. Current photo via Josh Armstrong / Air Force Athletics

USAFA, Colo. – The Air Force Academy men’s swimming and diving team completed a tri-meet with Colorado Mesa and the Colorado School of Mines Friday evening, Jan. 8, at the Cadet Natatorium. The meet was scored invite style, and AF came in first with 361 points.

The Falcons won eight of the 13 events contested on the evening. Mesa placed second with 218 points, while Mines was a close third with 217.

Two Air Force swimmers won two events on the evening, in junior Isaac Gwin in the 200 IM and 100 back, and then classmate Corey Shepard in the 100 and 200 freestyles.

Freshman Chris Lindley had a solid evening in the distance events, as he took gold in the 1000 free, and second in the 500 free. The final individual swimming event win came from sophomore David Tao in the 100 breast. On the diving board, freshman Erik Pfaffenbichler took first in the 1-meter, and second in the 3-meter.

Air Force’s final overall event win was in the opening swim of the day, the 200 medley relay. The squad of Gwin, sophomore Tory Bartlett, sophomore Matthew Lattin, and senior Erik Orr took gold with a time of 1:29.92.

The Falcons will be back in action tomorrow, Jan. 9, for another invite style tri-meet against Mesa and Mines. Action from the Cadet Natatorium will begin at noon MT.

The meet, which was altered to include invitational-style team scores, marked the first time that the team as whole had competed this season.  The Mavericks finished the 13-event meet in second with 218 points, edging Mines by one.  The host Falcons tallied 361 to win the meet.

The teams will contest another 12-event invite style meet on Saturday at noon after the Maverick women compete, starting at 9 a.m.

In Friday’s competition, Belliston won the 3-meter diving event with 272.63 points and later finished second on the 1-meter with 217.80 points.  Meanwhile, Rau claimed the 500-yard freestyle in four minutes, 45.60 seconds to record one of the Mavs’ four new 2020-21 RMAC Performance List leading times of the season.  His mark converts to 4:38.60 with the 7-second altitude adjustment.

Other RMAC-leading times came from Felipe D’Orsi, the 2019-20 RMAC Co-Freshman of the Year and Lane Austin in the 100 free and 100-back, respectively.  They both finished second.

Freshman Ben Sampson also claimed a pair of finishes, completing the 50 free in 20.94 seconds, just off his RMAC-leading best of 20.77.  He then swam the third leg on CMU’s 400 free relay team, which also took second in 3:04.24.  Austin, D’Orsi and Rau were the other legs on that unit.

In the 100 fly, Treven Wertz finished third in 50.81 seconds (50.66-adjusted) and now sits second in the RMAC behind event winner Robert Clayton of Mines.

Mahmoud Elgayar, who set three NCAA Division II Championship provisional qualifying times in the Maverick Open, a November time trial meet that saw four CMU swimmers compete in, also had a third place finish on Friday night.  He took third in the 100 breast at 57.10 and also led the Mavs with a fourth place finish in the 200 IM (1:55.86).

COLORADO SPRINGS – Colorado School of Mines officially opened the 2020-21 swimming season with the first of two days at Air Force on Friday.

The Orediggers took on Division I foes Air Force and Northern Colorado as well as RMAC rival Colorado Mesa across 13 events on Friday. The women’s meet was set up as a four-way dual with scores of Colorado Mesa 173, Mines 63; Air Force 181, Mines 55; and Northern Colorado 173.5, Mines 52.5. The men’s meet was scored as an invitational with Air Force first with 361, Mesa second with 218, and Mines just a point behind with 217.

Among the top individual performances in the evening’s first session for the women, the Oredigger freshmen excelled as Jorie Selig led the way with a second-place 24.25 50-free time that was tops among D-II swimmers. Sarah Bennett also impressed in the 50-free placing fourth in 24.47, while Anne Osmun snagged a third-place finish in the 200-IM at 2:09.40 and Lauren Mayo led the Orediggers in the 200-free with a fifth-place 1:57.54.

The Mines men picked up three event victories and numerous other top performances to be competitive in their season debut. Harry Smith scored a win in the 50-free, surging to a 20.88 win over the field, and Robert Clayton added a victory in the 100-fly in 49.66.

The Oredigger relays had a great night as the 400-free squad of Smith, Birnbaum, Clayton, and Wood won in 3:02.72, while their top 200-medley relay of Birnbaum, Scherschel, Clayton, and Smith took second in 1:30.81.

The second day of the meet begins at 9 a.m. Saturday with a 12-event women’s quad, followed by the men’s session at noon.

OreDiggers is a helluva nickname….