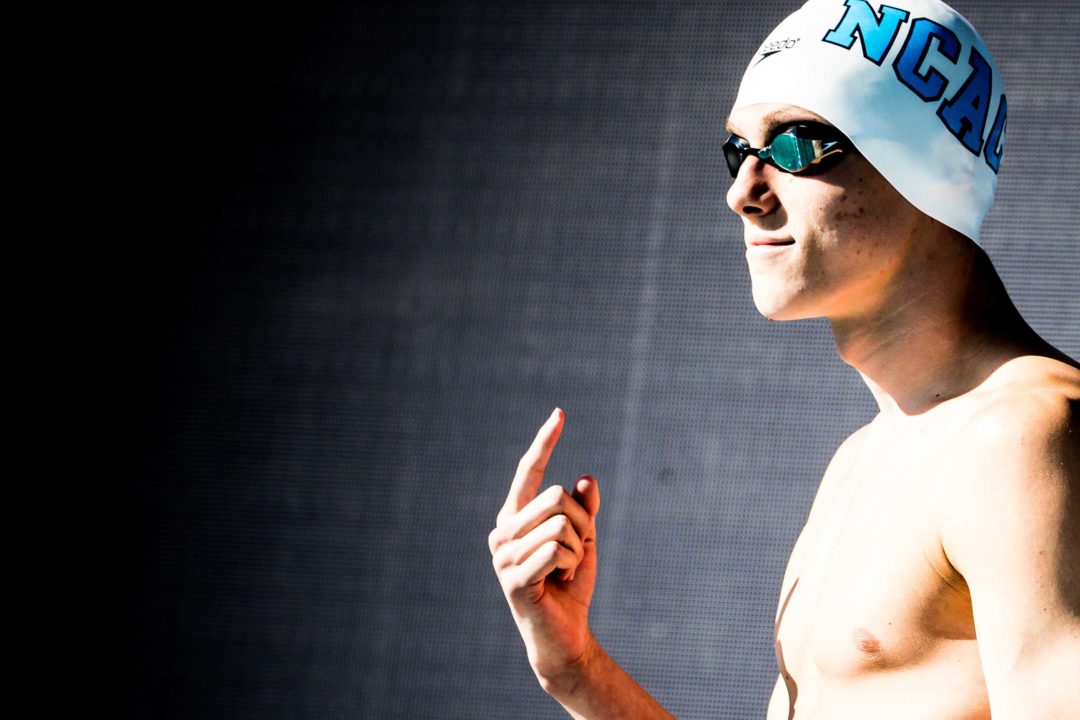 Sam Hoover is one of 12 male swimmers who have been newly-added to the USA Swimming National Junior Team for 2020-2021. Stock photo via Jack Spitser/Spitser Photography

The new roster rolls forward the 2019-2020 roster and added any age-eligible swimmers who met the qualifying criteria, specifically the times listed below. Athletes who carried forward from last year’s roster were allowed to remain on the roster, while new additions must be 18 years or younger as of December 31, 2020.

The above criteria was applied independently to the truncated 2019-through-2020 year-plus and any new swimmers were added to the team.

Qualifying Times for New Members of the 2021 National Junior Team:

The new roster nets out to 87 swimmers.

Of the 15 new additions, 12 were males while only 3 were females. What’s more, the new additions are geographically most usually from the southeastern United States, which was able to return to competition and training sooner than most of the country after the coronavirus quarantines began to ease.

so the 800m free men’s qualified time is 8:04, how comes there are couple slower timers made to the roster?

They were top 2 within the qualifying period.

So when is the qualifying period? Thanks for the replay in advance!

(But, anybody who was on the 2019-2020 team and didn’t make the cut on this one also rolled over. That’s why swimmers slower than the cut time, but fast enough to be top 2, aren’t necessarily in the top 2 above).

Wondering why Jake Foster is on the roster but Carson Foster is off? Carson is younger… Maybe this is a mistake?

Carson is on the senior National Team, which means he’s ineligible for the Junior team.

Total garbage that kids who have aged off the team and can’t swim for the team as 18u are still on there, while kids under normal years’ qualification standards who would have qualified got totally screwed. Why are we helping out the kids in the past to screw over the kids of the future? Can someone explain this to me so I can accept it. Don’t say 2020. Tired of the buck passing USAS. Give those kids who are 19 a T-shirt and let’s actually follow the mission statement for the team why don’t you please. (Maybe next year we can screw over a new pack of kids and give this year’s kids who got dumped a free pass.)

I think there should be a separate “Jr” team for those who were on the 2019-20 team but aged up to 19 before 12/31/20. This 19O jr team deserves all the benefits taken away from them by the pandemic. The rest form the real Jr Team (18U as of 12/31/20), which consists of qualified swimmers as in a “normal” year: top 2 ranked swimmers in each Olympic event (top 4 in 100 and 200 free), plus those 18U who make the hard cuts (or better than some world rankings) during the qualifying period.

For MANY of the events, they didn’t add any swimmers. For swimmers who happen to not have gone to Des Moines, they had one shot post pandemic at US Opem. I just don’t understand why they didn’t award last years swimmer then have a whole new team for this year. Most age group swimmers swimming club have had limited access to LCM pools and came to the US Open trained in not-ideal circumstances. Not to whine about that as everyone is doing the best they can, but the reality is the Jr Team is supposed to reward and nuture the kids who are up and coming and there are SO many girls who are dominating right now that were left… Read more »

If there were events where they didn’t add swimmers from last year (I haven’t dug to see if that’s true), it’s because the same two swimmers were ranked in the top 2 this season.

I think you’re misunderstanding the selection process. They re-ran the selection with the whole set of criteria…top 2, etc…it just so happens that most of the same swimmers were already on the team on the girls’ side.

In other words, if you eliminate the rollover swimmers…you still only would’ve only had 3 new swimmers on the Junior National Team.

They did displace swimmers.

Why was Chase Travis not on the team to begin with? She was a World Juniors Bronze Medalist in the 1500 Free, and was on the team in only the 10K??

It’s ridiculous they kept all of the swimmers from last years team on the roster and didn’t recognize the many swimmers who are swimming fast and have emerged this year. Many girls have been left off this list that deserve to be on the team. You have effectively punished all of the girls who would have made the team this year in a normal year for the sake of keeping last years kids on the roster, many of whom are either in college already and have not touched these times since over a year and a half ago and many of whom won’t touch them again. Short sighted for USA swimming to apply the same rules to “add” kids to… Read more »

Four Research Triangle area swimmers added and Five of the 12 men either currently swim for or will swim for NC State….pretty good haul for RDU.