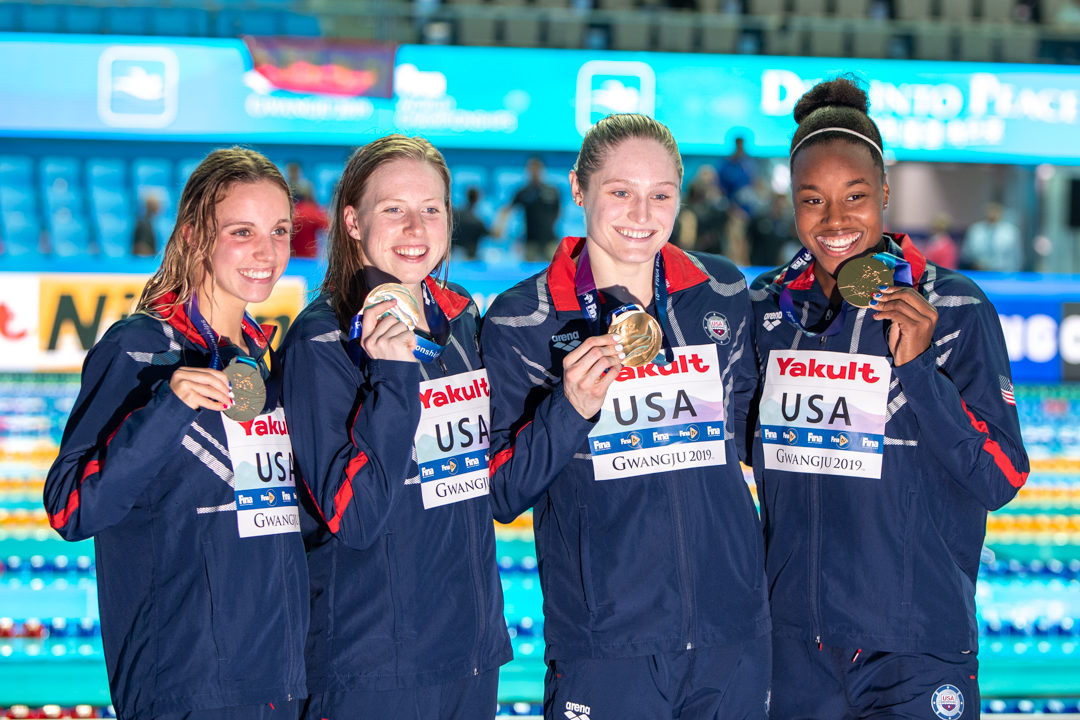 The US women of Regan Smith, Lilly King, Kelsi Dahlia, and Simone Manuel lead the pack in the 400 Medley Relay with a WR time of 3:50.40 Current photo via “Rafael/Domeyko Photography”

SwimSwam continues our analysis of the relay rankings for the 2021 Tokyo Olympics. This is the third in a series of articles for SwimSwam and today we conclude the women’s relay events with a look at the 400 medley relay. We will remind everyone of the relay qualification process for Tokyo:

The Czech Republic and Spain have made the biggest moves from a year ago. The Czechs, unranked in 2020 with a time of 4:11.54, dropped over eight seconds this past November. The quartet of Simona Kubova, Kristyna Horska, Lucie Svecena, and Barbora Seemanova jumped up to the first wild card position by swimming a 4:03.02 (splits: 1:00.33/1:08.73/1:00.07/53.89) at the Uzbekistan Open Swimming Cup.  This puts the Czechs less than a second from the Czech national record of 4:02.23 and in a good position to qualify for Tokyo.

Spain, previously ranked 20th and four spots out of the last wildcard position, they have now jumped up to the fourth wildcard spot with a time of 4:03.87 from December, dropping over a second from their previous time (4:05.32) and putting them just over a second short of the Spanish national record (4:02.84).

Spain retained three swimmers from their 2019 team, keeping the backstroke and breaststroke legs the same while moving Lidon Munoz Del Campo to the freestyle leg and swimming Alba Guillamon Novo on the butterfly leg. Africa Zamorano Sanz has dropped significant time over the past year in her backstroke events and she is now within a second of the Spanish record in both the 100 and 200 backstroke.

Notably, that relay was done without the country’s best-known swimmer, Olympic gold medalist Mireia Belmonte. In spite of being the country’s best overall swimmer, Belmonte rarely swims relays for Spain (and in fact, the country hasn’t raced any women’s relays at the last two long course World Championship meets). At full strength, she would be the butterflier on Spain’s best 400 medley relay, though health issues have hit her performances hard since the Olympics.

Spain should not rest on their laurels as a closer look at the bottom of the rankings show that eight teams are separated by less than two seconds. We could see a lot of changes in these places over the next couple of months. The European Championships scheduled for May at the end of Olympic qualifying should give those countries an advantage heading into the meet as teams will know their targets and be able to control their own destiny.

Israel is an unknown factor and has an outside chance of qualifying in this relay. As we discussed in the 400 Free Relay, Israel has two quality swimmers in Anastasia Gorbenko and Andi Murez. Looking at flat-start times from 2019 and 2020, Israel has an aggregate time in this relay of 4:05.65, which is well-under the current Israel national record. As aggregate times do not count for Olympic qualifying, Israel would need to swim under 4:05 to have a legit shot of qualifying for Tokyo.

Israel’s big advantage is the versatility of Gorbenko, which allows them to experiment with different combinations of swimmers. On paper, Israel’s best relay is Gorbenko (back) – Lea Plonsky (breast) – May Lowy (fly) – Murez (free). Of that relay, only Murez was born earlier than 2001, so there’s upside potential there in age.

The United States is the odds-on favorite for gold in this event and one of the surest bets in Tokyo. Led by Regan Smith‘s World Record lead-off of 57.57, the Americans quartet of Smith, Lilly King, Kelsi Dahlia, and Simone Manuel set a WR of 3:50.40 at the World Championships in 2019. Their time is more than three seconds ahead of second place.

The breakthrough of Australia’s Kaylee McKeown, the 2020 SwimSwam World Swimmer of the Year, to go under 58 seconds in the 100 backstroke, gives the Australians a chance here, though. While Lilly King is an ace-card for the USA that Australia can’t match, the Australian relay anchor Cate Campbell, at her best, is the fastest 100 freestyler in the world, and what’s more has proven to be a much better relay commodity in her career than the American anchor Manuel.

Although my personal guess is just under 4.03.5 for a wild card (assuming we will have enough qualifying competitions over the next 4-5 months.

The US first half is formidable and likely neither AUS or CAN can top them, but they can both real them in on the 2nd half to try to make it interesting.
Kaylee certainly raises the bar for AUS, but CAN is (again) seemingly overlooked here. Kelsey Wog is possibly the key for CAN to create 4 strong legs, she went 106.4 in season last Feb prior to the covid shutdown. A look at 🇨🇦 best splits:

Yeah to me, anybody who can get a breaststroke leg anywhere close to King is in the hunt. The problem is that Russia, the only country with a long course breaststroker within striking range of King, doesn’t have 3 legs to go with her.

I would have agreed BS (before Smith) ;). Any breast swimmer diving in semi equal to King would have done well to just hang on and give their fly swimmer (MacNeil and McKean who have been stronger then US options) a chance to catch up a bit and at least make the free leg interesting.
Now the front half of the US is so good and made the possibly of catching up that much more daunting. Do-able for the 🇨🇦 of the above falls into place and for the 🇦🇺 if they can find that brst leg.