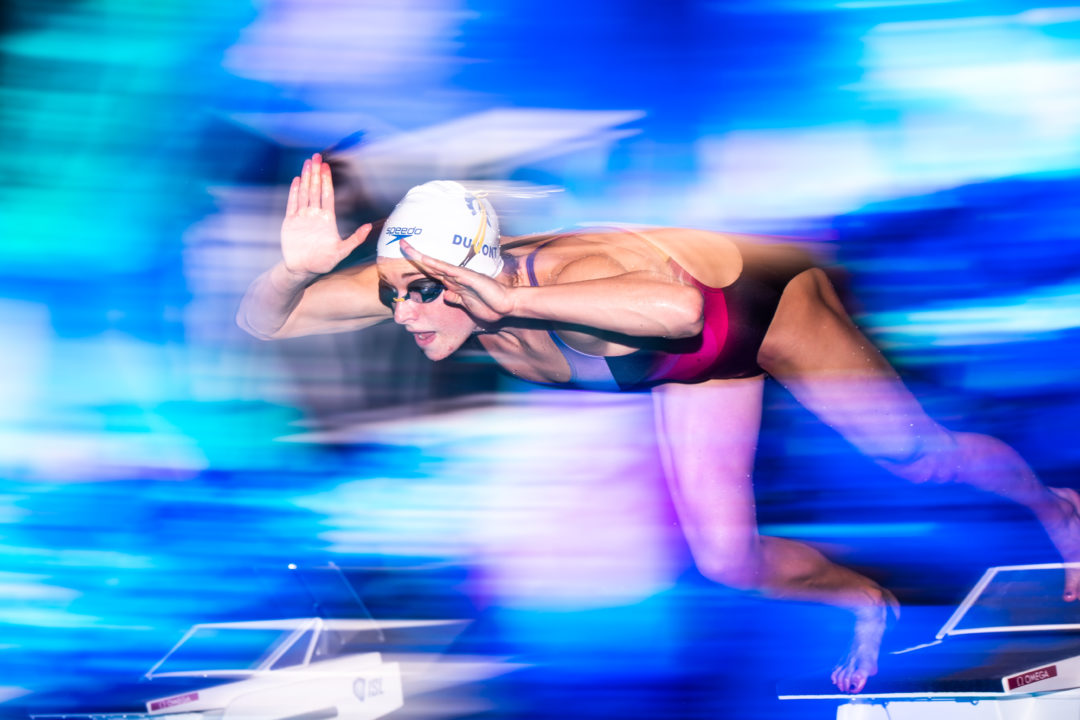 Valentine Dumont, who set who Belgian records in 2020, has helped Belgium move into a wildcard spot in the Women's 800 Free Relay Archive photo via Mike Lewis/Ola Vista Photography

SwimSwam visited relay rankings a year ago in anticipation of the originally scheduled games. As the Corona pandemic has forced the rescheduling and cancellation of swim meets, we would like to revisit the rankings for changes that have occurred in the past year. We will be looking at each relay over the next few weeks and plan to update the rankings as needed throughout the qualification period.

There has been one major change in these rankings from last year — Belgium, ranked out of the Top-16 a year ago, has jumped into the third wildcard position. The foursome of Valentine Dumont, Camille Bouden, Lana Ravelingien, and Lotte Goris swam a 8:05.13 (1:59.26/2:03.19/2:02.25/2:00.43) in Rotterdam in December. Dumont is coming off a very good 2020 season where she set Belgian records in both the 200 and 400 freestyles in August at the Sette Colli Trophy in Rome. This bumps Spain into the last wildcard spot and Singapore now on the outside looking in.

One of the biggest questions coming into this race is how Great Britain and Italy will decide to approach this relay. Both countries have the swimmers to qualify for finals but lack the depth to challenge for a medal.

The British Championships in April should provide some clarity in regards to the approach the British will take in Tokyo. As we saw at the World Championships in 2019, Great Britain chose not to swim the 400 free relay; if they feel they do not have a chance to medal, we may see more of the same in this relay in Tokyo.

That would open up a spot for Singapore (currently ranked 17th) or Brazil (18th) to earn a bid. The competition for the last wild card spot is tight as less than a second separates Spain, Singapore, and Brazil.

The medal race should prove to be another classic race between the US and Australia with both teams chasing the gold medal and the world record. After that follows Canada and Russia battling it out for the Bronze.

Russia’s relay got stronger in 2020, thanks to 22-year old Anna Egorova, who trains in France, swimming a best time of 1:57.58 in early December. Her leadoff leg of 1:58.19 at the World Championships was Russia’s biggest weakness at Worlds en route to a 5th-place finish.

The country also got deeper in this event. For example, 17-year old Aleksandra Bykova dipped under two minutes for the first time. She swam 1:59.25 in October at the Russian Championships. If her development continues, she could at least take some more pressure off the prelims squad in Tokyo.

Russia’s issue right now, on paper, is the lack of a hammer. They very well could put up a relay with four swimmers going 1:56, but to catch Canada (presuming health of key swimmers like Kayla Sanchez), they’ll need at least a 1:55-low split.

After a surprise World Record from the Australian women at the World Championships in 2019, Australia returns that same quartet in good form. So far, it looks like they’ll have about the same relay going forward into Tokyo (though there’s a few young swimmers like Mollie O’Callagahan and Ella Ramsay and Jamie Perkins who are within reach of boosting the prelims relay, at least). Australia swam Ariarne Titmus, Madi Wilson, Brianna Throssell, and Emma McKeon in finals.

The runner-up Americans have a quartet that is still in good shape as well – with training partners Simone Manuel and Katie Ledecky leading off, followed by Melanie Margalis and Katie McLaughlin. The 29-year old Margalis is the oldest member of that relay, though recent results haven’t shown any sign of a decline for her.

The Canadians have to be a darkhorse for Gold. The 4 below splits from 2019 worlds plus Taylor’s best from 2018 would be 7:41.9 putting Penny stroke for stroke with the US and Aus down the final 50 from the ’19 world rec race. They don’t have the depth of the other 2 nations but are getting closer, a resurgent Katrine + youngster Emma + Rebecca coming of a great ISL season (152 sc) gives them a lot more options in the 3-4 spots then ever before. If nothing else allows both Penny and Taylor to rest the heats and aim for both to hit 154 in the same relay, and allow a true internal race off for the final… Read more »

Will definitely, be a three way race, but the US and AUS usually seem to have the firepower and depth in the end to snatch the victory…

Agreed on the depth, the CANs will have to have all firing on all cylinders at the right time, no room for an off split, whereas the US and AUS do have that buffer…

I Wonder What kaylee could deliver for australia

Going forward, I could well see McKeown being part of this relay. It would not surprise to see her look to put down a fast 200fr at some point going into Trials (as a marker/note to selectors) but it would surprise to see her enter the event at Trials. IF she can get her PB down to 1.57 low or better, she may well be considered as an option for heats.

With regards to the young names listed, good luck to them and if they can make the final at Trials it would be a positive but in each case; it would require a PB of around 2 sec to realistically be in contention for selection. The reality is that… Read more »