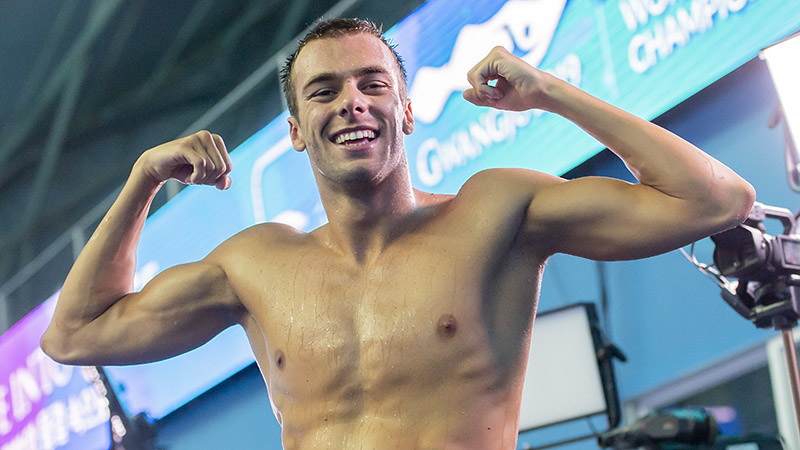 We're entering the final day of competition at this 2020 Sette Colli, which has been one thrilling string of races here in Rome. Archive photo via Giorgio Scala / Deepbluemedia / Insidefoto

American swimmer Michael Andrew has swum his 3rd lifetime best in 3 races this week at the Pro Swim Series meet in Indianapolis.

A 14-year-old named Lee Eunji (KOR) just produced one of the fastest 200m backstroke performances in history for her age.

We’re entering the final day of competition at this 2020 Sette Colli, which has been one thrilling string of races here in Rome.

We saw a World Junior Record go down yesterday, courtesy of 15-year-old Benedetta Pilato in the women’s 50m breast, as well as national records bite the dust in the form of Lisa Mamie‘s (SUI) 100m breast and Valentine Dumont‘s (BEL) 400m free.

On today’s plate, we’re set to see Olympic icon Federica Pellegrini race the 200m free, as well as Germany’s 2015 world champion in the 200m breast Marco Koch dive into the pool in that event.

We’ll also see one of Italy’s best-ever take to the pool, with reigning 1500m freestyle Olympic champion Gregorio Paltrinieri entered in his specialty event slated for the end of the session.

There was a two-way tie in our first event on this final night of competition, as Luca Mencarini and Matteo Restivo each clocked a 200m back time of 1:57.98 for co-gold.

Restivo ripped an opening 100m of 56.64 to lead the field by nearly a second before teammate Mencarini came on strong to seal the deal simultaneously with the national record holder.

Wrapping up bronze in the race was on-fire Mewen Tomac of France, who was near his lifetime best. After already establishing new French Age Records already here in the 50m and 100m backstroke events, the 18-year-old touched in 1:58.39 to fall just .08 outside of his 1:58.31 PB that garnered him the silver medal at the 2019 European Junior Championships.

National record holder Martherita Panziera collected her 2nd individual gold of these championships, nailing a decisive win in this women’s 200m back to add to her 100m back earlier.

Opening in 1:02.44 and coming home in 1:05.85, Panziera earned the only time of the field under 2:10 to stand atop the podium. Behind her were two countrywomen in the form of Costa De Saint Zofkova and Martina Cenci who finished with the silver and bronze in 2:12.52 and 2:13.17, respectively.

Another Italian Age Record (Cadet) fell at the hands of 19-year-old Thomas Ceccon, as the teen cranked out a big lifetime best in the 50m fly. Taking the title in 23.29, Ceccon upset national record holder Piero Codia who touched a hair behind in 23.38. Luca Todesco produced 23.73 to snag bronze in tonight’s race.

Ceccon took the World Junior Championships title last year in a PB of 23.37. He had previously placed 4th in this event at the 2018 Youth Olympic Games with a time there in Buenos Aires of 23.65.

For Codia’s part, the 30-year-old seasoned swimmer’s time here isn’t too far off the 23.29 he put up in the semi-finals in Gwangju, where he wound up tied for 9th.

Ilaria Cusinato took the lead of this women’s 2fly race right off the blocks and continued to maintain the top spot heading into the wall for a final time of 2:10.53.

Her time tonight is well off her own personal best of 2:08.78 from 2 years ago but was enough to give her the Italian national title ahead of Antonella Crispino (2:11.29) and Roberta Piano Del Balzo (2:11.42) who battled for the minor medal spots behind her.

Cusinato finished 9th and just out of the 2fly final in Gwangju last year, registering a time of 2:09.18 to fall just short.

Of note, the 6th place finisher in the World Championships final last year, Liliana Szilagyi of Hungary, was also in tonight’s race but finished 5th in 2:13.64.

A time of 2:07.60 is what Koch put up in Gwangju last year to finish 5th in the final of this event, but earlier he had notched a wining time at this meet in 2:07.96 to establish a new meet record.

In January of this year, Koch, the 2015 World Champion in this event, punched a time of 2:09.81 to snag a silver medal at the FINA World Champions Series in Shenzhen, China.

Of note, the Italian national record is one of the oldest still on the books, with Loris Facci’s 2:08.50 from over a decade ago remaining untouched.

The men’s 200m free was one of the closest races here in Rome, with the top 2 finishers separated by less than .20. Turning at the 100m mark together was Marco De Tullio and Stefano Ballo, who both turned at 52.47, while Gabriele Detti was right in the mix in 52.66.

De Tullio’s performance here is a breakout race for the 19-year-old, with his previous personal best resting athte 1:48.00 he put up in Rome last year. That marked just the 2nd time De Tullio has been under 1:49, with his 1:46.56 tonight making him Italy’s 4th fastest performer all-time.

Multi-Olympic medalist and world record holder in this event Federica Pellegrini added a 200m free gold to her 100m free victory from yesterday here in Rome. The 32-year-old who once swore off this 200m free event touched in a time of 1:57.80 to clear the field by nearly half a second.

Coming in for silver was Belgian Valentine Dumont, who produced her 2nd national record of this meet. Hitting the wall in 1:58.29, Dumont’s time her overtook her previous NR of 1:58.35 set back in 2017. Dumont already earned a 400m PB and national record of 4:09.41 for bronze on night 1.

Just one man got under the 2:00 barrier in this 200m IM but it was a big one, with Alberto Razzetti taking down an over-decade old national record.

Touching in 1:58.09, Razzetti finally overtook the Italian record of 1:58.33 that Alessio Boggiatto put on the books way back in 2009. For Razzetti, the 21-year-old had never before been under 1:59, owning a previous lifetime best of 1:59.25 from last August’s Italian National Championships.

Look for a separate post on Razzetti’s monumental record.

A trio of Italian women got on top of the 200m IM podium tonight, led by Anna Pirovano. Pirovano posted a winning effort of 2:14.21 to sneak to the wall just .09 ahead of runner-up Sara Franceschi.

Costanza Cocconcelli earned bronze in 2:15.42, while the Italian national record holder in this event, Ilaria Cusinato finished off the podium in 4th.

Busting out the fastest 1500m free time of his career, Olympic champion Gregorio Paltrinieri sizzled with a time of 14:33.10 to take the gold in the final event here at Sette Colli.

Paltrinieri held the Italian national record with the 14:34.04 he logged at the 2016 European Championships, a few months before he won gold at the Olympic Games. His old best time time also representing the European record in the event.

Flash forward to tonight and the unstoppable 25-year-old blasted the 2nd fastest performance all-time. Only Chinese Olympic champion Sun Yang’s World Record of 14:31.02 from the 2012 Olympic Games has been faster.

This is off topic, but I wonder if Swimswam is the only sports website that did predictions on what would have happened in the Olympics.

If anyone knows the equivalent website for track and field please share. I’ve never found anything close.

Marco De Tullio is the real deal. Not often you see Detti held off in a final 50 sprint. Very exciting prospect.

Real deal for what?

Mid distance free. How many teens are going 1.46/3.44? Not just the times though, his freestyle is fantastic to watch. The physical ingredients are all there, and he seems to have a good mentality.

So what you basically meant is that he is the future of men’s 200/400 free? In both events there are multiple guys who have been faster than him and are still young enough to keep improving for multiple years (Rapsys, Horton, Winnington, McLoughlin, Lewis, Scott, Dean). Also there are guys in both events who are younger than him and not much slower (Urlando, Zombori, Neill, Djakovic). He is a great talent and especially in the 400 free he could win a medal very soon, but i see absolutely no reason to call him the real deal when the talent gap between him and many of those other guys is slim at best. I am also surprised that a huge Tom… Read more »

I don’t think Dee said De Tullio was a bigger talent than Dean… Unless I’m missing something? I see nothing wrong with being excited about the future of a young burgeoning mid-distance swimmer.

Well, when you say that someone is the real deal, then in my book that means that you consider him at a different talent level than the rest (otherwise you couldn’t be so sure that he will end up being better than the other guys).

I think it’s a language misunderstanding. When I say the real deal, I mean he is confirming his initial promise, I knew he was a talent, but I wanted to see his race mentality, and he showed that in bucketloads tonight.

^^ The British definition of the phrase ‘the real deal’. I think perhaps it’s used differently in the US; I basically use it when I feel somebody is showing that they can fulfil the promise they’d shown previously.

American here and you are correct. For example, in the NFL we are still waiting to see if people like Sam Darnold and Baker Mayfield are the “real deal”.

Don’t know if you’re a native English speaker or not but “real deal” doesn’t imply that you are a lot better than all the other swimmers. It just means he is now established and will be a contender in the future. You are describing a “phenom” or “generational talent”.

That was an impressive swim, no doubt.

Too bad that he didn’t get the world record, he deserved to hold it for some time.