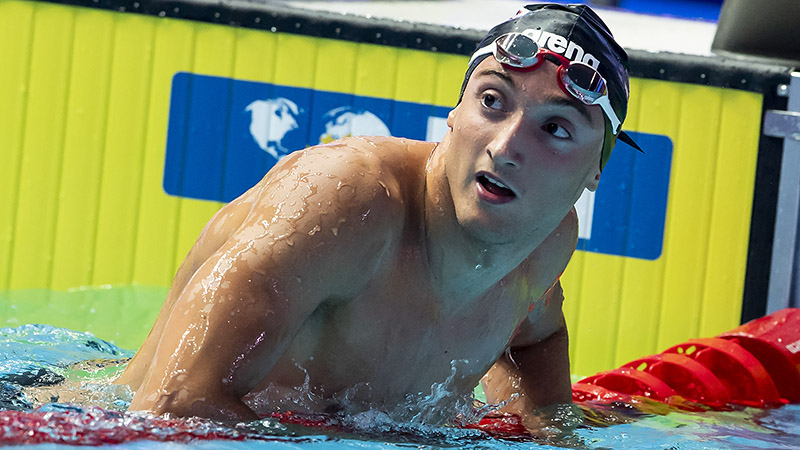 Italy's 200 fly ace Federico Burdisso will be in the water on day 2 of this year's Sette Colli Trophy, which doubles as the national championships. Archive photo via Giorgio Scala / Deepbluemedia / Insidefoto

Day 1 of the 2020 Sette Colli Trophy brought the heat, both on the deck in terms of high temperatures nearing 100F, as well as in the pool with elite performances.

We already saw Italian Gabriele Detti come within half a second of his own 400m free national record, while Lisa Mamie of Switzerland nailed her first-ever 100m breast time under the 1:07 threshold.

Let’s see what day 2 brings us from Rome, with a reminder that, for the first time in history, this Sette Colli doubles as the Italian National Championships.

Di Liddo fired off her 57.04 national record in the semi-finals of last year’s FINA World Aquatic Championships. She was nearly at that same mark in the final, producing a time of 57.07 to place 4th. As such, this effort here was off that caliber of performance, but enough to take the Italian national title.

Finishing just .44 outside of his own national record, 18-year-old Federico Burdisso manhandled the 200m fly field in a big-time 1:54.83. Splitting 53.36/1:01.47, Burdisso produced the 3rd fastest time of his career, sitting only behind his record and other sub-1:55 outing of 1:54.64 from last year’s Italian National Championships.

With Burdisso’s monster effort here, he further establishes himself as a world-class and potential minor medal threat at next year’s Olympic Games.

Not to be missed is the fact that Alberto Razzetti cranked out an impressive performance in his own right, beating his previous PB by nearly 2 seconds. Entering this meet the 20-year-old’s lifetime best sate at the 1:57.62 from the 2019 Italian Championships.

Italy’s national record holder in this event, Margherita Panziera clocked the only time under the minute threshold in tonight’s final. Touching in a time of 59.96, Panziera’s effort here wasn’t too far off the 59.83 result she posted in Gwangju last year, which rendered the Italian 10th after the semi-final.

Setting a new meet record, our first of the night, was 18-year-old Frenchman Mewen Tomac in this men’s 100m back. Tomac busted out the fastest time of his career by far, registering a winning effort of 53.29 to beat out Italians Thomas Ceccon and Simone Sabbioni.

Tomac’s previous PB in this event sat at the Italian Age Record for 18-year-olds of 54.17 he threw down at last year’s World Junior Championships. There in Budapest, he finished 4th, with Ceccon taking the World Junior title in 53.46.

Ceccon touched just .11 behind Tomac this evening in 53.40, while reigning Italian national record holder Sabbioni earned bronze in 53.71. Ceccon’s outing here was just .03 outside his own lifetime best of 53.37 as lead-off in Budapest on the Italian men’s medley relay.

Splits for Tomac’s menacing swim this evening included 25.87/27.42 to open in the only front half under 26 seconds. This marks his second French Age Record broken in as many days, as he already nailed a new 50m back time of 24.88 en route to gold last night.

Luisa Trombetti led a trio of Italian women landing on this 400m IM podium, with the 26-year-old Olympian producing a time of 4:45.24 for the win.

Trombetti represented Italy in this event at the 2016 Olympic Games in Rio where she produced a time of 4:45.52 to finish 26th. That was despite her having clocked a much quicker 4:38.54 at that year’s Olympic Trials. She hasn’t been under 4:40 since.

For the 2nd time tonight we saw a non-Italian top the podium, this time in the form of Hungary’s David Verraszto.

The two-time World Championships silver medalist in this 400m IM event, Verraszto took control at the get-go and never looked back here in Rome, registering a time of 4:12.66. That’s well off his own Sette Colli Record of 4:07.47 he produced in 2017, but enough to hold off both Pier Matteazzi and Dominik Torok who took silver and bronze in times of 4:15.03 and 4:19.30, respectively.

Italian Olympic icon Federica Pellegrini put on a show in the women’s 100m freestyle, grabbing gold in 54.33 to edge the field by over half a second.

Speaking of last year’s World Championships, that’s where 20-year-old Valentine Dumont produced her Belgian national record in this event in 54.90. Tonight, she was just .01 shy of matching that effort, wrapping up runner-up status in 54.91.

Italy’s fastest 100m freestyle ever, 21-year-old Alessandro Miressi, did not disappoint in his specialty event tonight, clocking a new meet record en route to his victory.

Silver this evening went to Ivano Vendrame, with his 48.70 keeping up his momentum from last December’s Italian Championships. There in Riccione, Vendrame put up the fastest time of his career in 48.38.

Manuel Frigo also got on the board tonight, hitting a time of 48.75 for his 3rd best time ever.

Racing her way to gold in a big way was 15-year-old Benedetta Pilato, the on-fire breaststroking teen from Italy who seemingly gets faster with every swim.

She already scored a new national record in this 50m breast with the 29.98 at last year’s World Championships but dropped another .13 here to score a new World Junior Record of 29.85. That outing slices .01 off of the longstanding WJR now-retired Lithuanian Olympian Ruta Meilutyte scored at the 2013 World Junior Championships.

Tonight marks the 2nd time that Pilato, then, has been under the 30 second mark, as her silver in Gwangju came with a 30.00 performance.

After that rousing performance by Pilato, Nicolo Martinenghi powered his way to the top of the podium in the men’s edition in a time of 26.94. That edged out the national record holder Fabio Scozzoli, who registered 27.23 for silver.

Alessandro Pinzuti hit a time of 27.66 for bronze this evening.

Martinenghi still owns the World Junior Record in this men’s 50m breast with the 26.97 he produced in 2017. He’s since been as fast as 26.85 and also has since broken the 100m breast Italian national record with his PB of 58.75 from just last December.

Yesterday’s 1500m freestyle winner, Martina Caramignoli, doubled up with another gold, this time in the 800m free event. Sans Simona Quadarella, Caramignioli took total control of this race, leading wire-to-wire to log a winning effort of 8:24.16.

Caramignoli’s time represents yet another personal best for the 29-year-old who also put up her first-ever 1500m mark last night under 16:00. Last December in this 800m free, Caramignoli touched in 8:27.92 to hit a best time. Tonight, she dropped nearly another 3 seconds to get to the wall first.

Coming in for silver was teenager Giulia Salin, who put up a solid performance of her own in 8:26.81. She scored a new Italian Age Record in the process, torching her previous PB of 8:28.99 that garnered her bronze at the 2019 World Junior Championships. Salin also hit a new Age Record last night in the 1500m.

Just as his teammate Gabriele Detti nearly overtook his own 400m free Italian national record, Gregorio Paltrinieri came super close to toppling his own mark in this 800m free final.

Touching the wall by a wide margin in 7:40.22, Paltrinieri fell less than a second outside his own NR of 7:39.27 from 2019. He settled for instead beating Detti by well over 5 seconds en route to taking the title in the 2nd fastest time of his career.

Detti’s time of 7:46.04 was good enough for silver after Paltrinieri took down his meet record of 7:43.06 from 2016. Domenico Acerenza collected another bronze after finishing 3rd in last night’s 400m, earning a time of 7:48.74 in this longer distance.

These folks were secretly working out during Covid

Italy seems to have been pretty genuine in their blocking of training during the early stages of the pandemic. But, they were able to return their top swimmers to in-water training fairly early, May 4th, which now is over 3 months ago.

Italy did two things that the US didn’t:

How does one pronounce Mewen Tomac?

First name sounds is almost like “Mewn,” when said with the proper accent sounds kind of like a cat meowing.

7:40 from Paltrinieri – incredible time. And Burdisso looking very good. And great depth in breaststroke and women’s freestyle. This has been a great meet.

Paltrinieri’ swim has been really incredible. He turned at the 400m in 3.47.14 (his second best time ever on this distance) and finished in 7.40.22, after all the struggles of this season and his change of coach. In the post-race interview he said that he’s very happy about his new way of training under coach Antonelli’s guidance.

Hugely impresssive swims from the Italian men … to be going close to their bests with all that’s happened is incredible. Hats off to you gentlemen!

8.24 & 8.26, and Quadarella wasn’t even in the pool. Then three men go sub 7.50. The world needs to learn from what the Italian distance freestylers are doing currently.

Well the US is clearly not apply their distance freestyle expertise to their men then.

Oh really? The medal tally in the women’s 800 meter freestyle at the World Aquatics Championships since inception (1973):

Oh really? The yikeses of the the last 100 calm downs have all been american.

Oh really? The medal tally in the women’s 800 meter freestyle at the Summer Olympics:

I did specify “currently”

Italians have won 8 medals across the 800 & 1500 events at the last two World Championships. As far as I can tell, that’s the measure of success and it’s far more successful than any other nation.

Great swim from Burdisso, but eye catching progress from teenager Faraci in the ‘B’ final with a 2s PB. The Italian youngsters are on fire!

And a full second PB for Michele Lamberti (son of the great Giorgio Lamberti, historical WR holder in the 200 free for nearly a decade) in the 100 back: 54.43 for him.

I was aware of his son Matteo, but I didn’t realise there was another. Very interesting; It’s all in the genes for some people isn’t it! Thanks ^

Anyone know how to possibly get the stream in USA? Tried finding a suitable VPN but don’t want to have to pay just for a couple days of streaming.

I have mullvad already, but Rai has a block on that. Don’t know which VPN works, mine doesn’t. 🤷‍♀️

Check out Swim Swimming on YouTube. The race videos are being posted on there. Obviously it’s not quite the same as watching it live but at least the videos are there.

PS: the videos are titled Italian Championships but I’ve checked and it’s definitely for the Sette Colli meet.

Sette Colli doubles as the Italian Championships this year.

That happens often I think

No, it’s actually the first time. Never happened before.