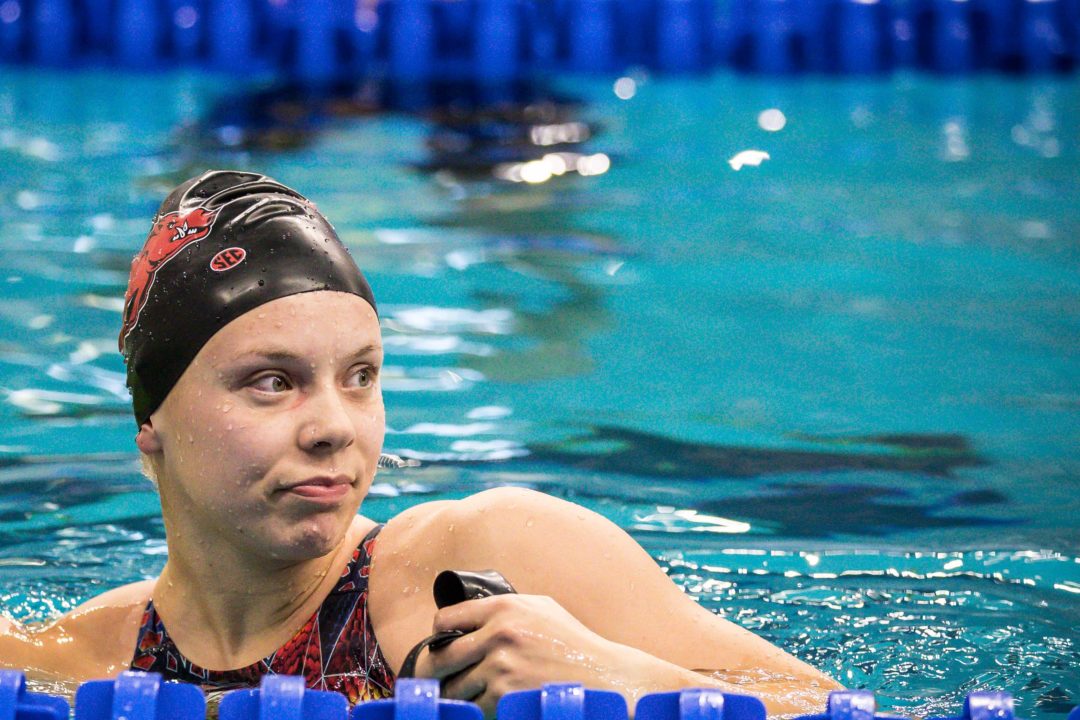 Led by Anna Hopkin (above), the British women may have the 4th-best 400 free relay at the Olympics - if they choose to swim it. Archive photo via Jack Spitser/Spitser Photography

In about 6 weeks, top swimming nations around the world will begin to ramp up their selection procedures for the 2020 Olympic Games in Tokyo, Japan. While those meets will do a lot of the selecting for who gets chosen for relays at the Games, which countries are eligible for relays are chosen by a wholly different process.

* note: the May 22nd final date for relay qualification is moved up from the original date of May 31st, although May 31st is still listed on some FINA documentation. May 22nd comes shortly after the conclusion of swimming at the European Championships.

A lot could change in these rankings between now and Tokyo, especially with the European Championships yet to come in mid-May, but headed into the start of Trials season, we wanted to give an update on who is in, who is out, and who is close.

Note: this doesn’t consider having enough swimmers with individual events or FINA “B” cuts to form a relay. We presume that countries with qualifying relays will be able to find 4 swimmers to race them, if they choose.

Switzerland has a good pair a thte top of their lineup with Maria Ugolkova and Nina Kost, but get pretty thin after that. They should be nervous, because Italy is lurking as first-team-out. Italy’s 4 best flat-start times from last season, led by Federica Pellegrini in 53.40, comes to a 3:38.73, which easily gets them in. They didn’t swim this relay at Worlds, however, and so their current entry on this list comes from the World University Games. Italy has a relay with potential of making a final at the Olympics, but probably not one that will medal, so it’s possible they won’t push too hard or use Pellegrini to try and make this cut, if they enter a relay at all. That’s a very different story for their 400 medley.

Also missing from this list: Great Britain, which controversially refused to enter a relay at Worlds last year. That was in spite of having potentially the 4th-best relay in the world thanks to the development of Freya Anderson and Anna Hopkin. If the Brits decide to swim this event at the European Championships, they can easily move into a top 4 qualifying position, even without much of a taper. This is a relay that is both very good and very young (all 4 swimmers 23-or-younger). It would be a shame to miss that opportunity.

There will be an Olympic dogfight at the top of this relay, both for gold and the World Record, between the US and Australia, with Canada looking very good for bronze.

This one is a bit odd, because the top wildcard teams (Italy, Great Britain) are far faster than some of the teams that have automatic qualifying spots from the World Championships. It would again be a shame to not see Pellegrini nor Anderson in the 800 free relay, but neither country stacks enough with their star swimmers to really have a chance at a medal here. Italy’s qualifying relay was done at the World University Games, while Britain’s was done at the European Junior Championships, so we don’t know yet if either will chose to race at Worlds.

The French relay here is also from the European Junior Championships. That’s another relay that with it’s top-tier athletes, led by Charlotte Bonnet, could probably make the Olympic final. France was 4th at the 2018 European Championships.

Without Pernille Blume to anchor, with Rikke Moeller Pedersen retired, and with Mie Nielsen struggling, the Danish women, silver medalists at the 2018 European Championships, flopped at the World Championships in 2019, finishing 16th. If they want a spot from the European Championships, they’ll easily have it. France’s top relay, done at the French Open in 2019, could also move up these rankings in a hurry if they so wished, bumping South Korea and Hong Kong into a precarious position.

The real unknown here is South Africa. Led by breaststroker Tatjana Schoenmaker, the South Africans have a good young core of swimmers that could put together a 4-minute medley, even with a big weakness on backstroke (Marielle Venter swam 1:02.8 to lead this relay off at Worlds – the 2nd-slowest split in the field).

There are no un-qualified relays that are too interesting in this field. It seems odd to not see the Chinese men here, but with no Ning Zetao, they’re still very thin in the sprints – the relay finished 17th at the World Championships.

If Joseph Schooling, back training with Sergio Lopez, can regain his previous form, Singapore could make a run at a relay swim here, but the question for them would be ‘is it worth tapering pre-Olympics to get it?’

The Canadian men have some good youth in this relay, led by Markus Thormeyer and Alex Pratt, but to make any noise here they need to get their other 2 legs at least into the 1:48s. It’s imaginable that 20-year oldRuslan Gaziev could get there, and a few other guys are close, but Canada will probably be more focused on the medley relays (men’s and mixed) and it would make sense for them to skip this 800 free relay altogether.

Note Ireland teetering in the 16th spot without an obvious challenger. They are not known as a great middle-distance country, but are in a qualifying position thanks to simply a great step-up-and-swim performance from their 4 at Worlds (including Jack McMillan and Robert Powell, both teenagers).

With no Mehdy Metella, France is unlikely to improve their qualifying time in this medley relay, even with Florent Manaudou. They’re vulnerable to being bumped by the Dutch, who were a 3:35.24 at the European Championships in 2018 even without Jesse Puts on their anchor. Arno Kamminga’s 58.6 flat-start in the 100 breaststroke in January, in fact, gives them an outside chance at a final. I’d expect them to go after a qualification at the European Championships.

This is the hairiest qualification scenario available, given how many countries still don’t seem to take this mixed medley seriously, in spite of it being an Olympic event. For example, China, which was DQ’ed in prelims at Worlds, swam a 3:43.79 at the Jinan Swimming World Cup stop in August, which broke the World Cup Record and would have been 7th at the World Championships. Chinese swimmers have indicated to Chinese media that they’re interested in this relay at Worlds, and so they shouldn’t be overlooked as medal contenders in spite of their wildcard status. The same is true for Japan, which also would’ve final’ed at Worlds if they hadn’t been disqualified in prelims.

Why didn’t countries like GB just swim the prems at the worlds and get this sorted out last year…they could have even entered a ‘B” Team .now all uncertainty, tapering, scheduling mess in the months leading to the actual Games.

Not gonna lie there is no way a “B” team from GB would make the top 12 at worlds. Our 5th to 8th fastest last year were all 55 highs. British swimming would have had to take our Number 4 (Lucy Hope) to swim with Anderson, Hopkin and SMOC which would have meant them sending another person to worlds and we all know what british swimming are like when sending big squads to competitons, if it isn’t 100% a medal chance its not happening.

Georgia Davies & Georgia Coates have been 55s flat start in the 100fr and were both on the team. Even if you swam both of them with Hopkin & Anderson amd left out SMOC you’re looking at well sub 3.40. Top 12 took 3.41. It was a nonsense decision from British swimming.

They should take Hope and get on with it. More female teams at this level keeps more in the sport for longer.

They didn’t need to enter a B team there had enough of the A team athletes there. The coaches just seem to think coming any less than 3rd is worthless.

Does FINA charge a fee for relay entries like USA/masters swimming does? Maybe they didn’t want to pay that fee?

Someone give me an @ for British swimming. I just wanna talk !!

These listings (highlighting 2019 Worlds) are a good reminder that nothing is given, and that the USA will have to work very hard to earn relay silvers and even hardest to get relay golds.

The higher ups at British Swimming have their heads so far up their own butts that they’ll never do what’s right for the swimmers. Another in a long list of stupid decisions. But it’s fine, they’ll bring Peaty’s best friend and 3-4 of Jimmy’s lane mates to Tokyo to swim prelims of their off events.