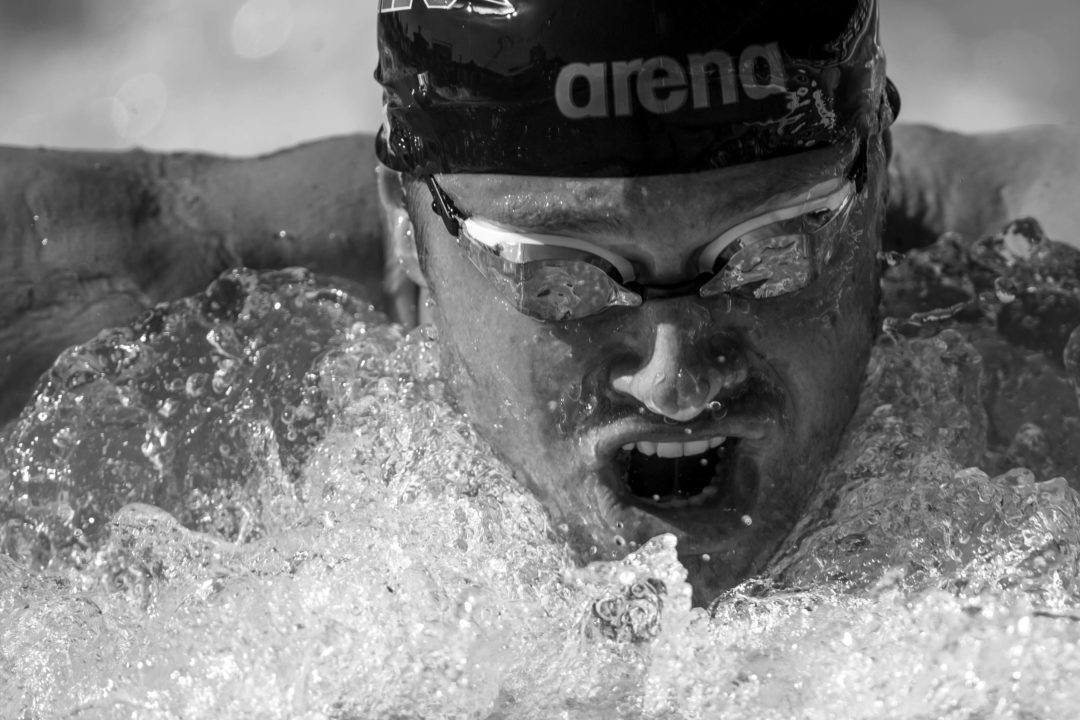 Sunday’s power event at the King Marlin Pro-Am Classic, featuring the double-sized cash prize of $1200, was the 1650 Freestyle. This event was recently dubbed the “Chuck Weilgus Mile” by the host team in honor of the recently deceased former head of USA swimming, and has always been given a special priority at the Pro-Am Classic in an effort to promote distance swimming. The women’s A-final of the longest event was the first heat of the night and it was anything but boring to watch.

Erica Sullivan had pestered Ashley Twichell all weekend, coming close each day in the 1000, 200 and 500 Freestyle events, but never quite able to snatch the win against the Open Water Olympian. The 1650 though, even with the $1200 prize on the line for Twichell, would belong to Sullivan. The two distance aces were neck and neck, literally looking into each other’s eyes on every breath for nearly the entirety of the mile long race. With 250 yards left, Sullivan managed to make her move and it was a pace that Twichell could not match. Erica Sullivan had found a new gear to close the race and scraped an over two second lead by the time she hit the wall, touching in 15:44.10 to Twichell’s 15:46.82. Third place went to Mission Viejo’s Savanah Dupuis with 16:57.97.

The men’s race was a lesson on efficiency as TXLA’s Clark Smith held a steady eleven strokes per length to give fans a treat by making a sub-fifteen minute mile look easy. The only pro in the field, Smith’s time of 14:51.58 was less than two seconds from the Meet Record set by Michael Klueh in 2010. The fully bearded former American Record Holder was obviously nowhere near his lifetime best, but did not need to be to take home the $1200 Christmas bonus for the win. The podium was rounded out by Sandpipers’ teammates Brennan Gravley and Joseph Gutierrez with 15:18.03 and 15:33.52.

Sandpipers of Nevada standout Reese Hazan claimed her fourth win of the weekend in the women’s 200 Back with 1:59.10. She was followed closely by a 1:59.64 from Wichita Swim Club’s Astrid Dirkzwager and a 2:01.61 from Mansfield Aquatic Club’s Madelyn Mechling. Bryce Bohman landed his third win for the weekend with a 1:44.54 performance in the 200 Back. Trident’s Patrick Callan edged out Wichita Swim Club’s Ben Patton for the second place spot on the podium, 1:47.83 to 1:48.15.

Hannah Saiz repeated as the top flyer with 1:59.15 for the 200 yard event, setting herself apart by schooling the field underwater throughout the race. She was joined on the podium by Reese Hazan (2:02.31) and Madelynn Tung from North Texas Nadadores (2:06.52.)

The women’s 50 Fly title went to Razorback commit and Taco Bell Addict Erin McGuirt with 25.23. Rounding out the podium were Texas Fords’ Ashlyn Fiorilli with 25.53 and Megan Keil form Wichita AquaShocks with 25.70.  The men’s 50 Fly win went to Tripp Cooper, with 20.89.  Cooper got into an immediate lead but was nearly swallowed by Bryce Bohman who aced the underwater portion of the second half to make up ground, finishing at 21.21 for second place. Cooper’s time erased the 20.96 Meet Record set in 2013 by Bryan Lundquist and was his second win of the weekend. LOBO’s Ben Waterman completed the podium with 22.19.

The women’s 200 Freestyle Relay went to the Little Rock Dolphins as the team of Alyssa Bloser, Lindsey Haman, Anna Jaworski and Angelina Ke hit 1:37.11 to hold off Mission Viejo for the top spot.  The men’s event went to Wichita Swim Club when the team of Ben Patton, Hunter Rey, Nathan Chan and Hugh McPherson combined for 1:27.47 to edge out Mansfield Aquatic Club and Ft Worth Area Swim Team who were just behind at 1:27.65 and 1:27.67 respectively.