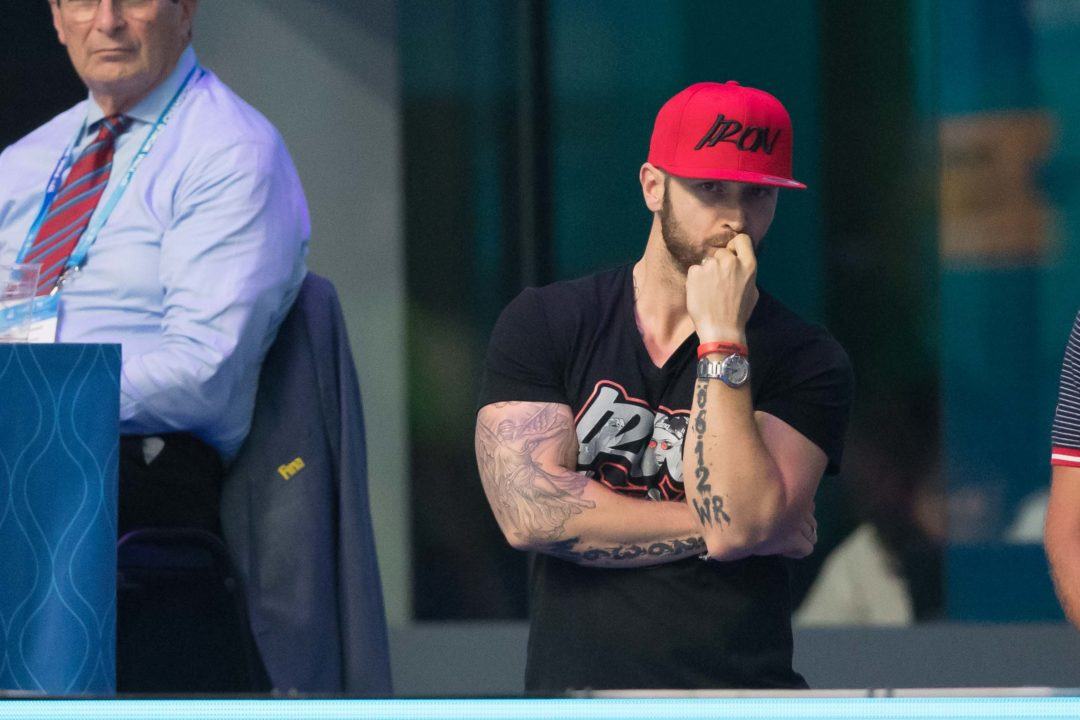 Hungary’s Iron Lady Katinka Hosszu and coach/husband Shane Tusup announced in December of 2017 that their relationship had hit a “difficult time,” and wound up ultimately announcing their split, both personally and professionally in May of last year.

Since then, Hosszu has continued racing under Swiss coach Árpád Petrov, while Tusup has remained relatively quiet and off the media grid.

That changed this morning, however as the 30-year-old announced via social media that he would be tackling a new endeavor as a professional golfer in the World Long Drive Association.

“The only problem is that with all the unbelievable success I have experienced over the last 6 years, I am not sure the sport of swimming can offer me the type of all-consuming adventure I need to continue growing personally and professionally. I have accomplished everything a coach can accomplish with an individual athlete, and the idea of spending the rest of my career chasing the same previous accomplishments, just add another tally mark, simply doesn’t inspire me,” Tusup stated in a letter addressed to ‘fans.’

“With that being said, I have decided to take on the crazy, nearly impossible goal of winning a World Championship title as a Professional Golfer in the World Long Drive Association,” said Tusup, despite the fact he admittedly had never picked up a golf club in his left until this past August.

Tusup, like Hosszu, swam collegiately at USC, though not to the same level of success. His best finish at the Pac-10 Championships came in 2010 as a redshirt junior, when he finished 14th in the 100 yard backstroke (49.85). He majored in human performance at USC.

No additional details were revealed in terms of where Tusup will be based, who will be guiding his efforts, etc. However, the former Hungarian Coach of the Year has made it clear he is leaving the sport of swimming, at least for the time being.

If he in no way has anything to do with Hosszu’s achievements and earnings after disastrous London Olympics then what Hosszu thanked him for at the award ceremony in the December of 2017 and why was he recognized the best swimming coach in Hungary. Were they blind to give this national award to American or vice versa they knew more than all authors of these cynical comments.

He would be really entertaining as a caddy. He and Tiger Woods would make a great pair.

The funniest part…this guy thinks HE has fans! Ha

Braden – there are NINE responses. LOL.

Just because I slow down to look at a car crash doesn’t mean I’m a fan of it.

hambone – the replies to his Tweet seem to pretty clearly indicate that there are people who support him and appreciate his work. If you slow down to look at a car crash and take the time to roll down your window and say “glad you’re back man!!” or “Best of luck with anything you start with! If anyone, you deserve it!” then you’re probably a fan of it.

Braden it seems he does have a fan in you but that logic is flawed and a bizzar metaphor. And im sure he does have some “fans”. But I make posts about random crap and I have friends of mine say, “cool” “congrats” etc… it doesn’t mean they are “fans”. They could be just polite or interested.
I think why I am so disgusted by Shane is his extreme arrogance and total disrespect for an amazing women, Katinka, whom he doesn’t even say her name while boasting how he has achieved all that can be done in this sport.

Flipper12 – I’m just a fan of facts. We can weasel-word definitions of the word ‘fan’ all day long , but at the end of the day you’re trying to strong-arm the rest of the world into feeling exactly the way you feel about Shane, as though any other opinion of the man is invalid. To me, the assumption that your personal opinion is the only opinion that can exist seems equally as arrogant as what you accuse Shane of doing.

My most recent interactions with Shane were not pleasant. But my job is to put those interactions aside and focus on reality, and the reality is, that even if you don’t like him, there are others who are fans… Read more »

This is bizar, but since I only come to social media for the comments I will engage again. (And all in good spirits)
“Strongarm”… I made a comment on an a single article of a swimming webpage? People can think what they want about shane. Im not strongarming anyone.
My arrogance? Yes, I think highly of myself. Id even say I am arrogant at times. Even my human desire to respond and to have the last word on this thread proves that. I am flawed, I am conceited at times, and I certainly do not have as many “fans” or media followers as Shane.
I appreciate all you do on this site and my Strong arming shane… Read more »

i mean, something something dean farris, you know

How many golf-related tattoos is he going to get now that he’s in full-on midlife crisis mode?

The dude is only 30. It’s a bit early for a midlife crisis. Which makes me terrified to see what he will be like at 50.

“… the idea of spending the rest of my career chasing the same previous accomplishments, just add another tally mark, simply doesn’t inspire me,”

Wow. This is a really telling snippet. Best of luck collecting other tally marks.