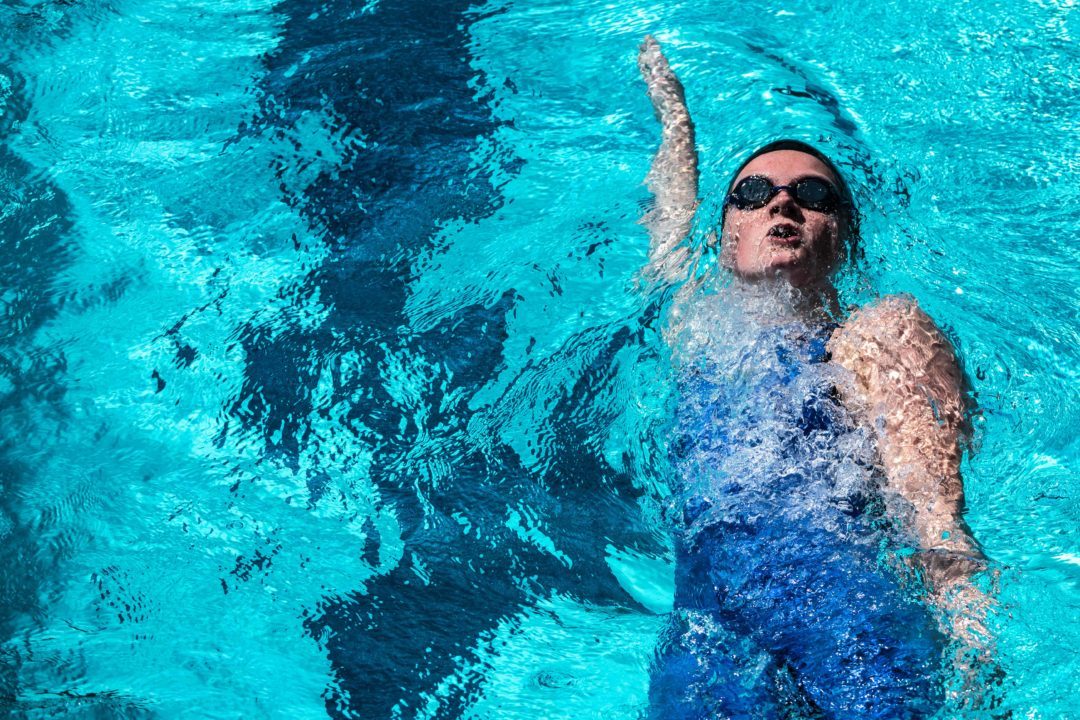 Junior Pan Pacs team members Natalie Mannion and Teagan O'Dell are the only swimmers on the women's side of the roster taking on both Jr. and Sr. Nationals. Archive photo via Mike Lewis/Ola Vista Photography

As we already highlighted, there are several age-group stars who will be taking on the US Junior National Championships just days after the completion of the US National Championships meet. In addition, there are several new names dotting the psych sheets for this meet that are expected to make an impact and potentially challenge for Junior National Titles. Here are the top storylines to follow on the women’s side:

Will Any Juniors Post Times That Would’ve Won Sr. Nationals?

With many US World Championship Team members, Olympians, and National Teamers opting to skip Nationals, the meet was slightly slower in comparison to previous editions. There are several swimmers entered to swim here who may be capable of posting times that would’ve won the National Title last week.

The strongest candidate to potentially achieve this is 17-year-old JoJo Ramey, who was a finalist in the 200 backstroke at Olympic Trials last summer, finishing 7th. Ramey holds a best time of 2:08.90 in the 200 backstroke, which is not too far off of the 2:07.29 Isabelle Stadden posted to win the event at Nationals. Though it is unlikely Ramey makes such a large drop, her young age and improvement in her other events suggests that she may have room left in the tank to drop more time.

Another event to watch for this happening is the 100 breaststroke, where Emma Weber holds the top seed in a time of 1:07.62. Though she was only 1:08.16 in the final at Nationals, she was not too far off of Kaitlyn Dobler’s winning time of 1:06.88. Depending on how she handles swimming both meets back-to-back, Weber may be able to pull something out here.

How Will Jillian Cox Respond to Erin Gemmell’s Strong Meet?

At US Nationals, Erin Gemmell had, arguably, the meet of her life, coming in 2nd in the 200 freestyle (1:56.14) and winning the National Title in the 400 freestyle (4:06.17) with best times in both events. She is slated to contest both events at Junior Pan Pacs and should be the heavy favorite to win both races.

Derivaux, who competes for the Jersey Wahoos, is entered in 4 different events over the course of the week including the 100 fly, 200 fly, 400 IM, and the 200 backstroke. Her highest seed stands in the latter of those 4 events, where she enters seeded 18th. As one of the youngest competitors in the field, Derivaux is already in the position to qualify for finals assuming that she can match her entry time of 2:15.77, which currently stands as the #2 time in 11-12 age group history. She may also take a shot at Elizabeth Beisel’s 11-12 NAG Record of 2:15.17 that was set all the way back in 2005.

Justina Kozan Tuning-Up for Duel in the Pool

18-year-old Justina Kozan is the only swimmer on the USA Duel in the Pool roster competing at Junior Nationals this week, and is only one of 2 age-groupers on the roster alongside Bella Sims. At Nationals last week, Kozan made the A-final of the 200 IM, the B-final of the 200 butterfly and the 400 IM, and the C-final of the 200 freestyle. Her highest finish came in the 200 IM, where she came in 4th, just missing the podium while also winning the 18 and under National Title.

In her final tune-up for the Duel in the Pool, Kozan is set to race the 100 fly, 200 free, 100 back, and 200 IM, entering as the top seed in both the 200 free and 200 IM. Given her success at Nationals, Kozan’s times this week may serve as an indication of just how much she actually tapered for either competition, or whether she’s saving herself for Australia.

Guessing the mens 100 fly will be exciting to watch

Will any Juniors post a time that would have won at Seniors??? How screwed up is USA Swimming, that this might happen. Why is this meet called JUNIOR NATIONALS?

Teagan O’Dell gets to swim at home, and that’s awesome, the double is no problemo when you can sleep in your own bed. It’s like going to practice every day

It’s junior nationals because the swimmers competing must be juniors? It does what it says on the tin. Multiple juniors have won Olympic medals, including Katie Ledecky, who did not compete in a senior national meet until, I believe, Olympic trials that year.