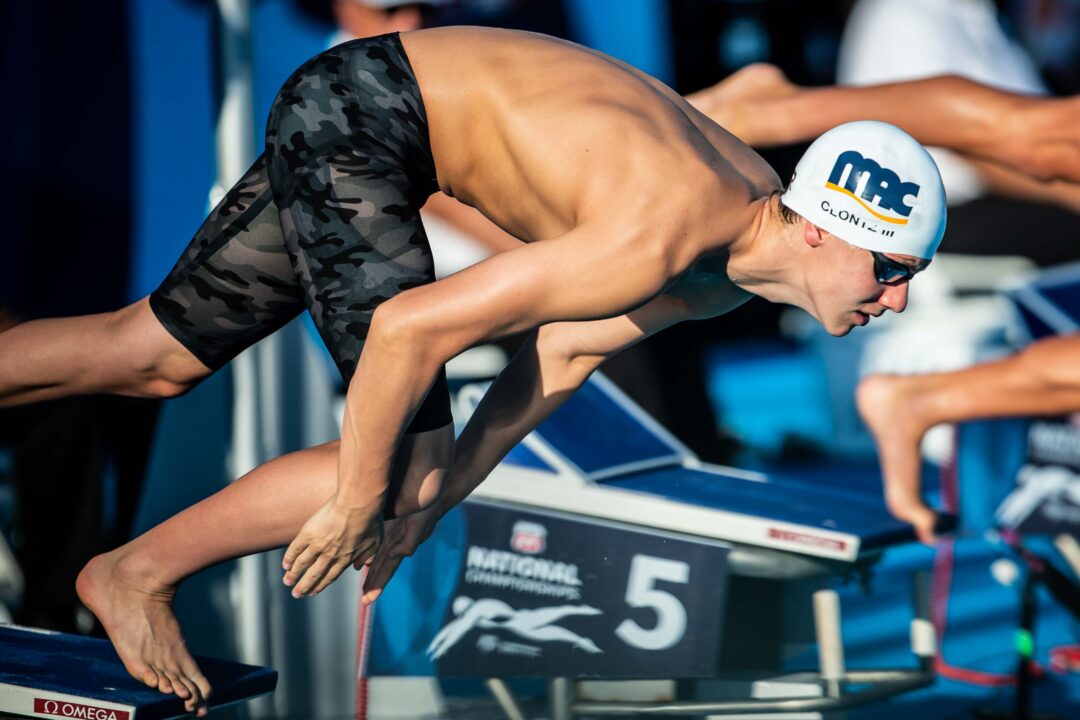 There are only two highly-seeded scratches to report on the first day of the 2022 Speedo Junior Championships in Irvine, California.

Following up on last week’s senior/open championships, this week’s meet will feature some of the top 18-and-unders in the country, including a number of swimmers who will race later in the summer at the Junior Pan Pac Championships.

The biggest day 1 revelations are the scratches of Luca Gissendaner and Norvin Clontz.

Gissendaner, who normally trains with the Scottsdale Aquatic Club in Arizona but who was registered for this meet as “unattached Santa Clara Swim Club,” was originally entered in just one race at this meet: Monday’s 100 breaststroke. An updated version of the psych sheets don’t include his name, nor do Monday’s start lists, so he is out of the meet altogether.

Gissendaner was the 8th seed entering the meet, and will race for the defending NCAA Champions Cal in the fall.

The only other top-10 seeded scratch is that of Norvy Clontz in the boys’ 1500 free. He was seeded 5th in that event as one of 8 entries for the meet. He is still entered in the 200 fly for Monday, where he is the 63rd seed.

He didn’t swim the 200 fly at Nationals, so this choice is probably built around an opportunity to get times in a different event while under taper.

Big names to look out for in Monday’s opening races include 15-year old Thomas Heilman, a multi-event National Age Group Record holder. He enters the meet as the top seed in the 200 fly ahead of Carmel’s Aaron Shackell.

Aaron’s younger sister Alex Shackell, 15, is the top seed in the women’s version of the race. She had a big freshman season at Carmel, winning the Indiana High School State Championship in the 100 fly.

New Singapore Record Breaker Nick Mahabir, who trains in the US, is the top seed in the men’s 100 breaststroke. Jillian Cox of Longhorn Aquatics in Austin leads the field in the women’s 800 free after placing 6th in the event at the US International Team Trials in April. She has continued to race well since that meet.