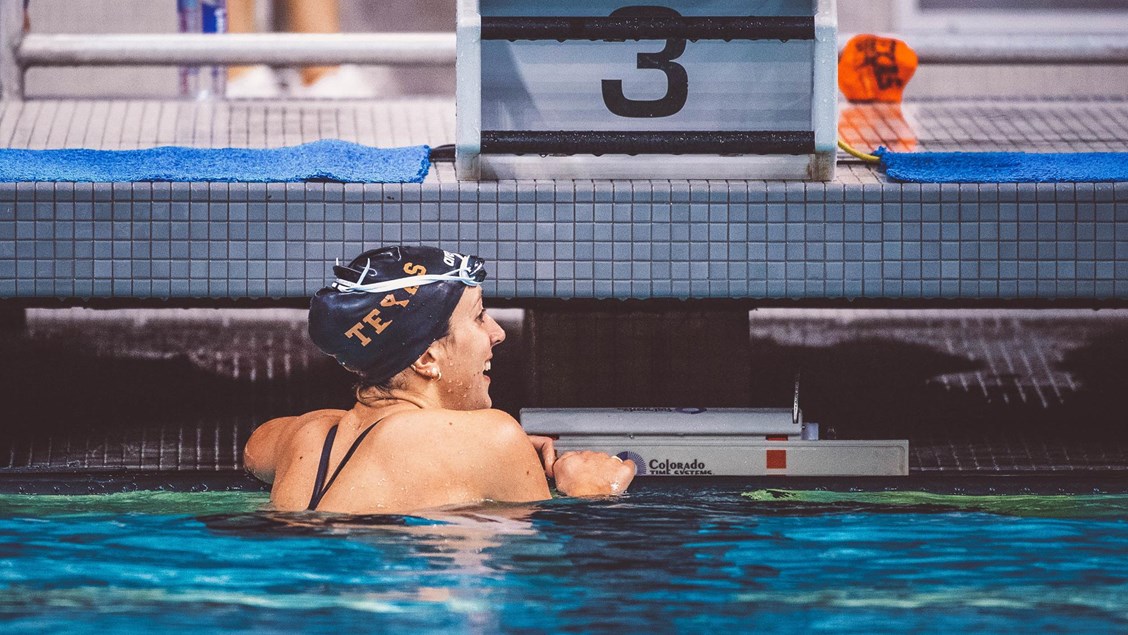 Rising Texas senior Bridget Semenuk was one of several current college swimmers to hit lifetime bests en route to wins on the final day in Austin. Archive photo via Texas-Athletics

The final day of the Austin Southern Sectionals didn’t have quite the same level of fireworks as the previous three days, as neither Carson Foster nor Shaine Casas competed on Sunday after some eye-popping performances earlier in the meet. But there were still some fast swims by post grads, currently college swimmers, and age groupers.

Current University of Texas swimmer Kelly Pash hit a new lifetime best with a 2:13.08 win in the 200 IM. She won by over five seconds, and she shaved 0.05s off of her previous best, which came at this meet last year. Pash won four events over the course of the meet, including the 100 free, 200 free, and 100 fly on previous days.

We thought we might see Casas light up the 200 IM given his other swims this week, but with his absence the win went to former Longhorn Sam Stewart, who won in 1:59.73. That’s the 16th time under 2:00 for the 25 year-old Stewart, who hit a lifetime best of 1:57.70 in this event at April’s US International Team Trials despite not training with any of the main post-grad groups in the country.

Current Texas swimmers Coby Carrozza hit a new lifetime best by over three seconds while taking second to Stewart, with a time of 2:03.07. Carrozza, known primarily as a freestyler, made the USA’s World Championships teams in the 800 free relay.

The women’s 50 free was unsurprisingly one of the closest races of the evening, with three current Texas women leading the way. Bridget Semenuk got her hand on the wall first with a 25.35, followed closely by teammates Grace Cooper (25.56) and Kyla Leibel (25.59). That was a new lifetime best for Semenuk, whose previous best of 25.68 came at the April San Antonio stop of the Pro Swim Series.

UVA swimmer Matt Brownstead is in Austin this week, and he made the most of his foray away from the East Coast, as he won the men’s 50 free. Not only did he win, but he also set a new lifetime best of 22.54, improving on his previous best of 22.65, which he first set a UVA Intrasquad meet in the fall of 2020 and then tied at last summer’s Olympic Trials.

2nd place went to Longhorn Daniel Krueger, who touch in 22.69 for the 4th-fastest performance of his career. His hit a new lifetime best of 22.20 at the US Trials this year. Krueger recently completed his fourth year of competing at Texas, and has not yet publicly indicated whether or not he’ll be returning to Texas for a fifth year of eligibility.

In the distance events, 16 year-old Jillian Cox of Longhorn Aquatics picked up her second win of the week with a 16:41.80 win in the 1500 free. That’s over a five second improvement for Cox, who has verbally committed to Texas. The men’s 1500 free crown also went to an age grouper, with 16 year-old Evan Witte of Metroplex Aquatics taking the win, His time of 16:07.22 was nearly 18 seconds faster than his previous best.

Always associated “age groupers” with 14 and under….

My name is Jonas.

Thanks for all you’ve shown us

Any specific reason why Casa didn’t swim the 2IM? He’s swimming well and setting best times. Seems a strange choice. Is he swimming it at Nats instead?

My guess would be he’s swimming both IM’s at Nationals.

I believe it was Johnston vs casas 4 IM coming up.