The Adam Peaty Lion Roars With In-Season 58.73 At Edinburgh 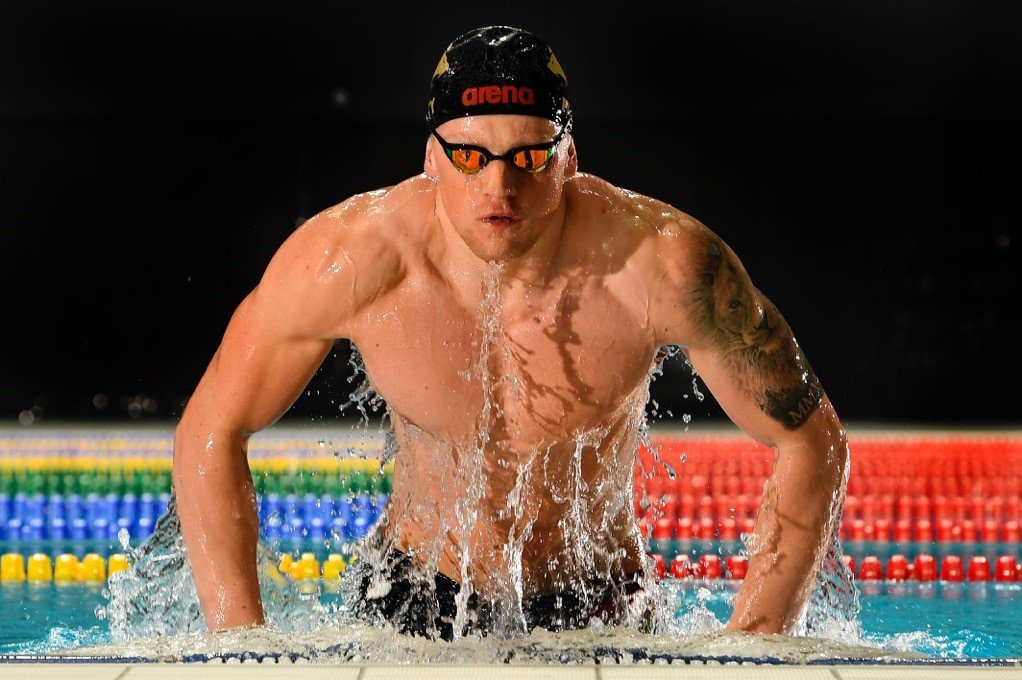 Adam Peaty proves he's automatic, going sub-58 seconds in the 100 breaststroke yet again. James Wilby was his partner in crime, producing a near-PB to rocket up the world rankings as well. Archive photo via Arena

Britain’s Olympic lion Adam Peaty already turned heads when he punched a morning 100m breaststroke time of 59.94 in heats of the Edinburgh International Swim Meet. But, the 24-year-old Loughborough World Record holder took things to yet another level tonight by dipping under the 59-second threshold.

Stopping the clock at a mighty 58.73, Peaty rockets himself up to the #1 spot in the world with this in-season effort. His mark tonight also checks-in as the 22nd fastest performance of all-time with the Brit now holding 18 of the fastest 25 time on that list.

Also putting up a very positive performance was teammate James Wilby, who hit the wall in 59.23 to claim the 23rd fastest time ever in the event. His outing this evening in Edinburgh laid waste to the 59.43 he produced on the Gold Coast for silver behind Peaty in this event at the 2018 Commonwealth Games.

Wilby now moves into the #2 slot in this season’s world rankings, displacing Japan’s Yasuhiro Koseki to #3 at the moment.

And for Wilby, the bonafide talent said,

“I’m pretty happy with that. This is my second competition on the trot – I did Iowa last week and this one this week and I’m really happy to be consistently around these times, especially after all the travel.

“This cycle last year was really good for me, winning the Commonwealth Games, so I’m just looking to make incremental improvements on that, with the long term goal being Tokyo. With the work that’s being going on in the pool and the gym, and balancing University, I’m really happy with the position we’re in this far out from trials.”

Very proud of my nephew Adam. He works so hard and pushes himself to be the best he can be. He is in a league of his own

You really have to appreciate how dominant this guy is. 58.73 would win nearly every major championship ever, and for him it’s just a pretty good in season time…

Seriously, has someone ever been 1.5 seconds faster than everyone else in the world in a 100?

Only person as utterly dominant in an event currently is Ledecky.

Sjostrom in the 50 fly too

Not as consistently, though her record is insane.

OK. What does it mean all time? Till today.
I wrote about dominance. There’s no linear correlation between WR and dominancy as we know. Theese guys and perhaps a few more are at least 1 second (mainly depends on the distance) faster than anybody else.