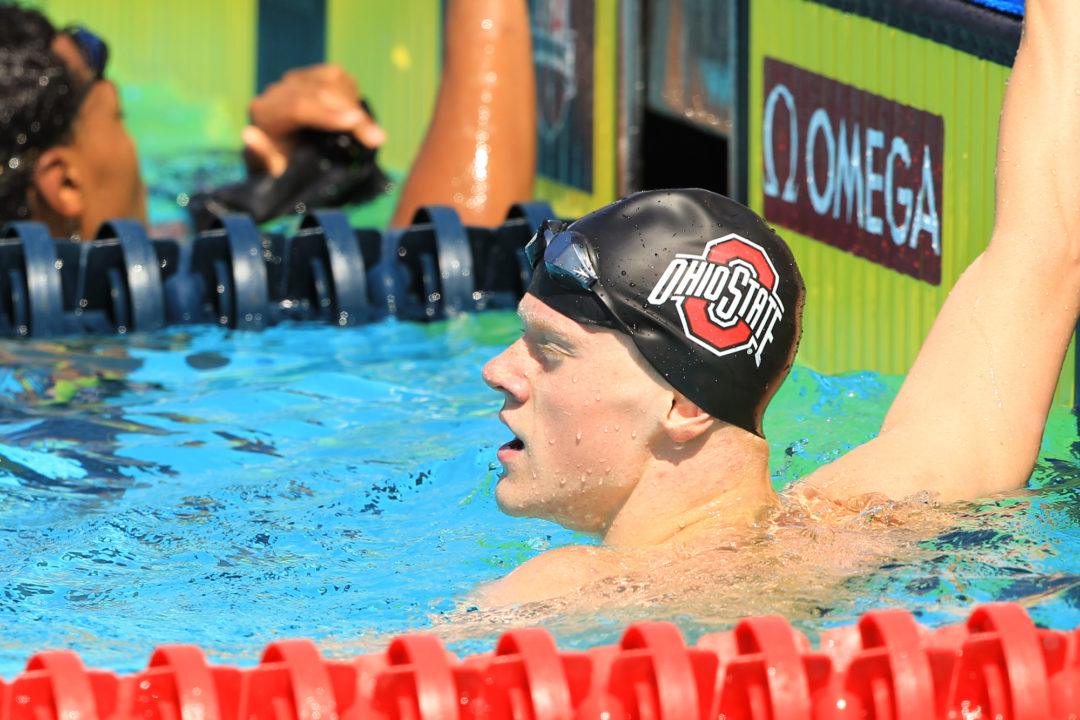 The Buckeye's led the NCAA in that regard, getting more swimmers under 20 seconds than any other NCAA program last season. Stock photo via Tim Binning/TheSwimPictures.com

During the 2018-2019 NCAA season, Ohio State’s men’s team racked up 10 swimmers who broke 20 seconds in the flat-start 50 free. The Buckeye’s led the NCAA in that regard, getting more swimmers under 20 seconds than any other NCAA program last season. Here is the list of the top 10 NCAA teams with the most sub-20 second sprinters in the 2018-2019 season:

Of this group of 10 swimmers, Michael Salazar and Mossimo Chavez, graduated. Another swimmer from the list, Ruslan Gaziev, has taken an Olympic redshirt for this season. That leaves the Buckeyes with 7 swimmers returning from last year’s sub-20 group, but they gain Arizona State transplant Cameron Craig, who boasts a personal best of 19.50 in the 50 free, and has already been 20.08 this season. Additionally, Colin McDermott, a junior this year, posted a 20.05 in the 50 last season as a sophomore, dropping .82 seconds from his best time over the course of last season.

Q: What was your reaction to learning your program had the most swimmers break 20 seconds in the 50 in the NCAA last season?

Coach Dorenkott: I was a bit surprised when you shared that Ohio State led the country in sub-20 sprinters in 2019. We take pride in our sprinting in Columbus but there are a number of programs nationally that emphasize sprinting. So, it is nice to be in good company.

Q: In your view, what are you doing differently that gives you so much depth in your sprint group?

Coach Dorenkott: One of the blessings of a combined program is the ability to provide focused coaching attention across the entire spectrum of events without compromise. Our sprinters have been the biggest beneficiaries of the combined setting as we had traditionally been known as more of a middle distance type program. Additionally, when we combined the program our Athletic Director, Gene Smith, bought into our vision for what it would take to be competitive at the national level. Gene put the support and resources in place for us to put together a deep and talented coaching staff. Lastly, we empower our coaches to fully set the standard for the respective student-athletes they have been charged with leading.

Q: The freshmen class you guys brought in last year was huge, and packed with sprinters. Is there a focus on sprinters in your recruiting?

Coach Dorenkott: On the men’s side, we doubled down on relays, sprinting and diving. We felt this was the quickest and best way to become relevant at the NCAA level. Our next step is to build relays that can contend for NCAA titles.

Q: If there is a focus on recruiting sprinters…is it a conscious decision because of the NCAA format?

Coach Dorenkott: I have mixed feelings on simply focusing on one end of the racing spectrum with our recruiting efforts. That being said, with five of the 21 contested events at the NCAA level being relays which are worth double points, one has to put a premium on recruiting speed. However, our more aerobically  driven athletes will always have a special place in my heart.

Q: Is there a focus on sprinting in your training program?

Coach Dorenkott: Yes, yes and yes! We have broken our program into five distinct training zones with a full-time, dedicated coach responsible for each of the zones. Three of the five zones are sprint focused. Zone 1 is led by Matt Bowe and is built around elite male sprinters. Zone 2 is directed by Bryon Tansel and focused on our top female sprinters. Matt Bowe provides oversight of both zones 1 and 2. Matt is one of the top young minds in our sport and has experience swimming for and coaching with Canada’s Ben Titley. Zone 3 is a hybrid training group loaded with many of our top male swimmers with a sweet spot of the 100 to 200 distances but the ability to get it done on the sprint relays. Zone 3 was directed by Jordan Wolfrum for the past two seasons and is run by Dorsey Tierney-Walker this year. In addition to our five full-time swimming coaches, we have two full-time volunteer assistants and two quality control coaches which makes for a small coach to athlete ratio which we believe is paramount to elite performance.

Q: Is there a type of set or training that you believe yields the best results for sprinting?

Coach Dorenkott: At the most basic level, fast swimming is about manipulating the principles of adaptation and accommodation. Our sprint coaches manage the variables of volume, intensity and density on a daily, weekly and seasonal basis with volume and intensity being the most valued. Even with small training groups, we have athletes at varied points in their development. This is where coaching becomes more of an art than a science. Knowing how and when to apply an appropriate dose of stress or training to an individual comes with experience. Further, our goal is to build sustained improvement year-over-year. Regardless if you are a sprinter or distance athlete, swimming is a process-driven proposition that works more like a slow-cooker than a microwave.

Q: How important do you believe dryland and/or strength training is for sprinting?

Coach Dorenkott: I was lucky as a young coach to work with Ray Bussard for three summers at various camps around the country. Ray was a true innovator in our sport. He brought a background in track, football and basketball to the pool. Ray believed there were three basic rules for all athletic movement… 1. For every action there is an equal and opposite reaction 2. The shortest distance between two points is a straight line 3. Less is more.

Less is more is another way to say, economy of movement. Economy of movement is a simple way to say, the great one’s make it look easy. I believe that, in part, economy of movement is a function of a highly tuned central nervous system. Sprinting in swimming is the highest expression of a highly refined CNS in our sport. While you will on occasion be fortunate to work with an athlete who has the genetic gift of a CNS that operates at a higher level than their peers, for most of us we have to develop it. Resistance exercise on land and in the water, in my estimation, is the best way to elicit a CNS response that will directly impact sprint performance.

Maximum strength is an expression of capacity. How we use that strength would be considered utilization. In swimming that utilization goes from power (start/turn) to endurance-based strength (distance types). Our sprinters run four week cycles in the weight room (3 weeks loading/1 week unload). The Fall is dedicated predominantly to strength. The championship season is focused on strength maintenance and a conversion to power and power endurance.

As an aside, I reached out to Westside’s Louie Simmons about 10 years ago for some insights into his strength program. He told me to come over to the gym and bring one of our athletes. Louie instructed me on different lifts to administer to one of our young women. After the workout, Louie remarked to me that the young woman who had just lifted had “shopping mall strength”. Curiously, I asked what shopping mall strength looked like. He told me that the woman who works at the local Cinnabon store has more strength than my athlete. Needless to say, point taken and addressed. Our strength program complements our approach in the pool and vice-versa. With sprinters one will not work without the other.

Really interesting interview, thanks for the article!

It appears that 3 others on that list aren’t on the current roster. One swimmer is returning from their 200 free relay that competed at NCAA meet.

Really excited to watch what Cameron Craig can do for the buckeyes this year, big get for them

Not to downplay this at all, but I think with this being the year 2019 we are looking at 18 being the “new” 19. I would like to see who had the most 18s, or I would even consider and like to see relay splits that were 18 too. I think the list would be a little different then. But aren’t we at the point now where a 19 does not always qualify for NCAAs? or make the A heat at a conference meet?

Yes but still a very interesting text on how to trim sprinters. Knowing Matt I see him as an analytical and progressive coach. Still every coach-swimmer relation should be about reaching as close to the full potential of that particular athlete.

They also have 38 guys on the roster. That’s the advantage some of these big state schools have. Give scholarships to the best, cheap or free in-state tuition for the rest and they have a monopoly on all top prospects in their state. Then they all compete for spots on the conference team.

It took a 19.38 to get to NCAAs last year. 19.99 got you 31st at Big Tens last year, not even scoring points at conference. As ridiculous as it is to say, it’s just not an elite milestone anymore.

Also Louie Simmons is a hack.

“ He told me that the woman who works at the local Cinnabon store has more strength than my athlete.”

Louie Simmons laying down the burn! Have to say though the Ohio state athletes are built. What they are doing in the weight room is certainly adding some size.

With Felix’s collapse last year, my guess is Michigan is not the elite distance group they once may have been. That may have been the single biggest collapse in decades. As the article infers, I think we are seeing the rise of other powerful programs across all conferences, a changing of the guards. Nicely written article…and impressive for Ohio State.

I dunno fam, Felix had a rough meet, but they’re still a really good distance program.

Nice article and interview. Can Ohio State become the destination for the elite in-state taken that had eluded them for years?