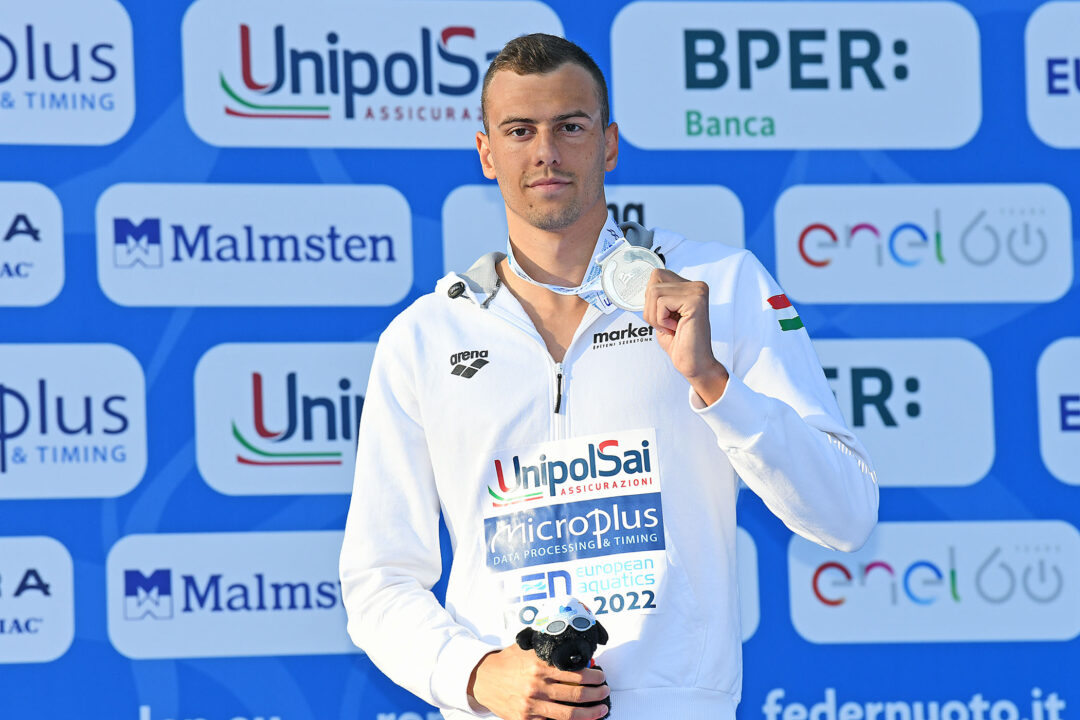 “I turned to the last leg with thoughts like even if I die here, drown, whatever, I’ll push as hard as I ever did,” Benedek Kovacs said of his late surge. Current photo via Fabio Cetti

Hungary’s Benedek Kovacs clocked a 29.20 on the final length of the 200 backstroke to rally all the way from fifth up to second place and steal his first major international medal in comeback fashion at the 2022 European Championships on Saturday.

Just how badly did the 24-year-old want a spot on the podium? Apparently he was willing to risk his life for it — or at least that was his mentality he shared with media members following his runner-up finish.

“I turned to the last leg with thoughts like even if I die here, drown, whatever, I’ll push as hard as I ever did,” Kovacs said. “For my family, for my coach, for the awful lot of work I’ve put in. And now here I am, lost for words. Guess it will take some time until I recognize what I’ve just done.”

Newly-minted world record holder David Popovici credited his patient approach after living up to the hype in Saturday’s 100 freestyle final with a 46.86 that erased Cesar Cielo’s 13-year-old mark in the same pool. The 17-year-old Romanian sensation only basked in his victory for a moment before setting his sights on Sunday’s 200 free.

“Yesterday I said that the European record was just one step in the right direction – and I was right,” Popovici said. “There was no rush and I had to be extremely patient about the world record. I’m still hot from the race, but these championships are not over yet, nor this very long season. It has hurt but it’s always worth it and I feel fine right now. It felt great and it’s very special to break this record which was set here in 2009 by Cesar Cielo.”

It’s official: Butterfly specialist Kristof Milak wants to add the 100 free to his Olympic schedule after his new Hungarian record of 47.47 earned silver behind Popovici.

“This was a brilliant race, a joy to swim next to David,” Milak said. “I’ve just thought that perhaps I have a presence which itself means some motivation as this is the second world record set in the lane next to me. David is a fantastic swimmer, I think the same crazy genius of the freestyle that I am in the butterfly, and it’s great that his name will hit the headlines for long, long years.

“I don’t care about this new national record here,” he added. “My goal is very clear: I just want to reach a level in this event to arrive to Paris 2024 with the capability of swimming a time somewhere very close to 47 seconds.”

For 33-year-old Zsuzsanna Jakabos, the 10th time’s the charm at Euros. The 400 IM silver medalist says she didn’t expect herself to advance out of the heats as the third-ranked Hungarian in the event, but the veteran’s calculated race plan paid off with her first individual Euros medal in six years.

“This is my 10th long-course European Championships and finally I learnt how to swim the 400 IM properly,” Jakabos said. “Honestly, I clocked a couple of better times at Sette Collis here but who cares, now it is the silver medal which counts, isn’t it?”

“Honestly, I came here that on paper I wouldn’t make the final as I would drop out as the third-ranked Hungarian in the heats,” she added. “Still, I stuck to the rule I had learnt during all those years: never push the 400m IM to the maximum in the morning. So I had a comfortable swim in the heats and it turned out to be enough to make the final, where I managed to control my race as planned. I also learnt that I don’t have to conquer the world in breaststroke, just complete it and reserve enough for the free – and this worked really well today.”

As the lone member of the sub-25 club, Sarah Sjostrom talked about a feeling that only she knows after Saturday’s win in the 50 fly. The 28-year-old Swede swam a 24.96 to capture her fifth Euros title, returning atop the podium after missing the previous edition while recovering from a broken elbow.

“I’m happy with my time, to go under 25 seconds is always a great feeling,” Sjostrom said. “It’s simply amazing to race in front of this great crowd, love this atmosphere. I made an all-in and tried to go as fast as possible and I feel lucky to enjoy the support of the Italians fans. I’ve brought here my best when it counts most in this summer and I’m very proud of that. I was improving race by race in this event, all the way to the final.”