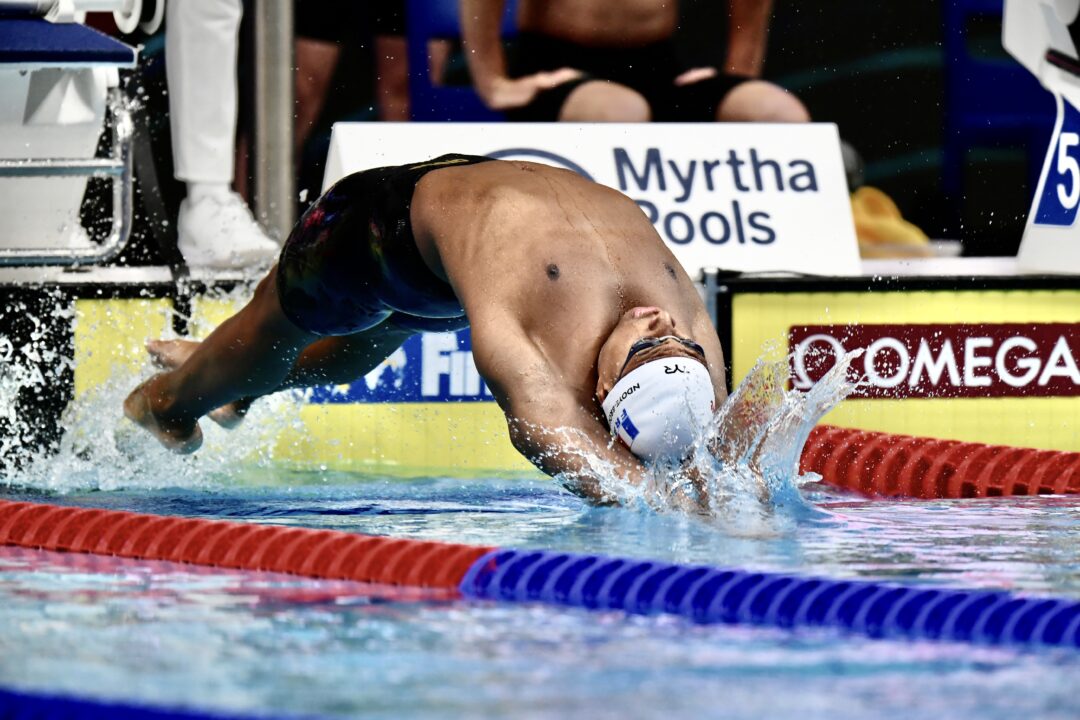 After a faulty starting wedge threw off his semis last night, Yohann Ndoye-Brouard wasn’t letting anything get in the way of his 200-meter backstroke final.  Archive photo via Fabio Cetti

After an issue with the starting wedge threw off his semifinals last night, Yohann Ndoye-Brouard wasn’t letting anything get in the way of his 200-meter backstroke final on Saturday.

The 21-year-old Frenchman surged ahead of the field on the final 50 to win gold in 1:55.62, breaking his own national record of 1:56.10 from last March by nearly half a second. The time makes him the fourth-fastest performer in the world this year behind the three World Championships medalists (Ryan Murphy, Luke Greenbank, and Shaine Casas).

“It’s a gold that I have expected somewhat, because I knew I was in a good shape,” Ndoye-Brouard said afterward. “At a certain time during the race I saw I could still make it. It is my best time and I beat the French record, which is a great feeling.”

Ndoye-Brouard bounced back in a big way after going just 1:57.38 to place 10th in the semis at Worlds. He showed signs he was in better form here in Rome last night when he shaved nearly a second off that time during a re-swim caused by a faulty backstroke wedge.

At last year’s Euros, Ndoye-Brouard missed the podium by just .04 seconds. This time around, he seemed determined to bring back hardware.

The only man who flew home faster than Ndoye-Brouard’s 29.51 on the final 50 was silver medalist Benedek Kovacs. The 24-year-old Hungarian blazed 29.20 on the last length of the pool to steal the second podium spot by just .12 seconds from Greenbank, the reigning silver medalist in the event.

“I turned to the last leg with thoughts like even if I die here, drown, whatever, I’ll push as hard as I ever did,” Kovacs said. “For my family, for my coach, for the awful lot of work I’ve put in. And now here I am, lost for words. Guess will take some time until I recognize what I’ve just done.”

According to FINA’s top times search, both Ndoye-Brouard and Kovacs now rank among the five fastest men in the world this year. Ndoye-Brouard was previously ranked 22nd while Kovacs moved up from 18th.

Switzerland’s Roman Mityukov led through the first three turns only to fade to fourth down the stretch. The 22-year-old was just off his Swiss record of 1:56.22 from last night’s semis. At last year’s Euros, Mityukov took bronze with a 1:56.33.

The defending champion in the event, Evgeny Rylov, was banned from competition this year due to Russia’s invasion of Ukraine.

In my mind, him and Marrit are ones to watch