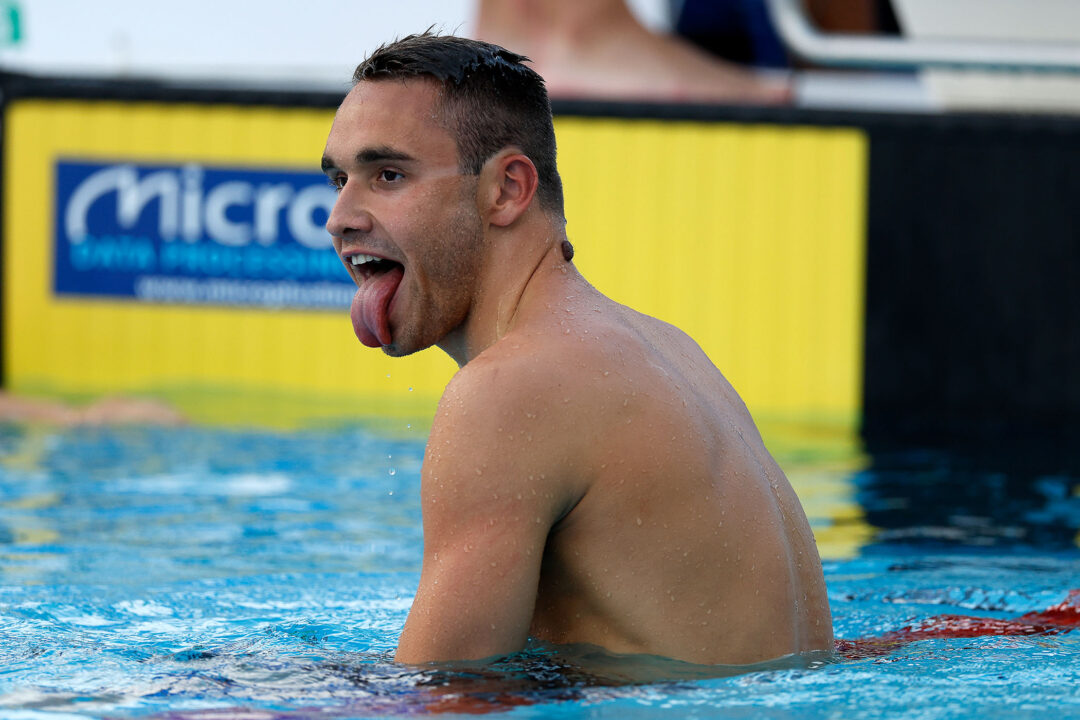 Milak took second to David Popovici at Euros, but his 47.47 makes him the third-fastest 100 freestyler in the world this year. Current photo via Fabio Cetti

A swimmer who got overshadowed by David Popovici’s world record was Kristof Milak, who put up a time of 47.47 to take silver in the men’s 100 free final at the 2022 European Championships. With this swim, he breaks Nandor Nemeth‘s Hungarian record that was set at the World Championships this summer. Nemeth’s previous record time was 47.69.

Opening in 22.86 and flipping in third at the halfway mark, Milak went on to throw down a 24.61 final 50, which was the second-fastest back half split in the field.

But what was most impressive about Milak’s swim was that he went on to swim the 100 fly semi-final just 15 minutes later. He put up a time of 51.01, which was the fastest time in the field and will give him lane four in the final tomorrow.

Although he may be overshadowed by Popovici in the freestyle, Milak is the favorite in the butterfly, being the 200 fly world record holder and 100 fly European record holder. That being said, Milak’s ability to go 47-mid in an “off” event like the 100 free highlights his versatility and bodes well for the butterfly events coming up later in the meet.

At this year’s World Championships, Milak didn’t even swim the 100 free, opting to focus on his signature 100/200 fly events. However, at Euros, he added both the 100 and 200 free to his lineup.

The Dressel era is officially over.

Stop spouting garbage, Dressel was 50.01 to lead world rankings back in April. Haven’t seen Milak beat that time yet.

Even if it is … WRs, individual Olympic golds, multiple WC titles. He’s achieved everything there is.

The best male swimmer right know without a doubt.

World record holder by a landslide in 200 butterfly, 2. best time ever in 100 butterfly. 17 fastest in the 100 free, already faster then Phelps.

With incredible relay splits in 100 and 200 free as well.

Well the main challenger is Popovici.

I think Marchand is ahead of him, with 2 an insane 400 medley time and a massive in 200 medley and quite a time in 200 butterfly.

Popovici has to swim a 3:43 in 400 freesytle to be there with Leon, but Milak has 4 brutal events hopefully after the 200 free final on Monday.

Popovici has just swum a super insane 100 free & an insane 200 free, higher than both IMERs for Machand. Freestyle way ahead of Ims or even fly.

Why would have been?
The most difficult events in swimming is 400 medley and 200 butterfly. Everybody knows that.

Sorry but the Phelps comparison in ludicrous. Milak is great, but keep phelps out of this.

Saying faster than a swimmer from a different era is just dumb. Do you know how many people are faster than Matt Biondi? Basically none of them are greater than him.

I never mentioned Phelps, his not active. And we simply compare his times with swims of today, when the field is totally different nearly in every event, expect the 200 butterfly.

And the 2nd taper of the summer for him. We know he was fully focused on Worlds with it being in his home nation. Him swimming better here is unexpected.

Not at all, finally he has more then 3 month without any illness, and just proper training/racing.

He’s in good form
The fly should be fast

Not gonna be. He will have a 200 free in the morning and 4×100 relay. Without him Hungary barely have a chance for itt.

This european championship schedule is the worst ever for sprint freestyle athletes, a small nation doesnt have a chance.

Phelps evolved the speed able to be in this sport. So it is not surprising that he is faster than the Goat. The sport is evolving.

Might be worth remembering that Phelps popped those kind of times swimming brutal schedules and did so regularly from 2003-09. His comeback was great but those years he was unbelievable.