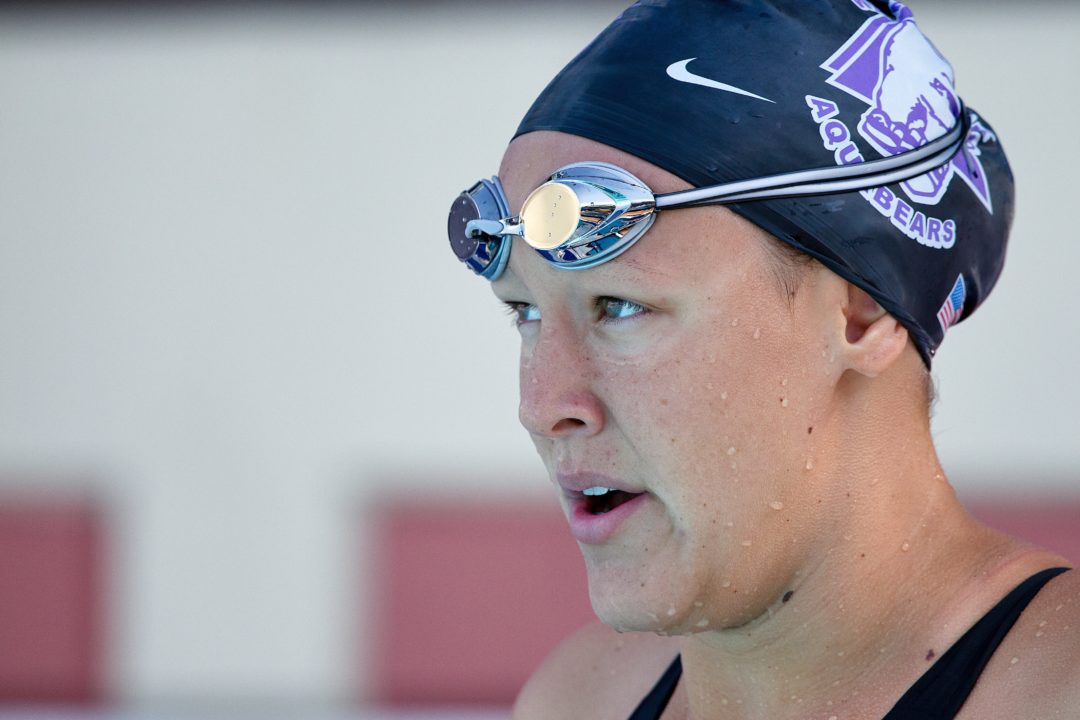 Michael Meyer and Bonnie Brandon were once again victorious for the Arizona Wildcats, winning their third events each on night 3. Brandon’s time was the second-fastest in the nation in the 200 back, behind only Courtney Bartholomew of Virginia.

Kevin Cordes casually slipped back under 1:50 in the 200 breaststroke, dominating a solid field by over 5 seconds. And Kasey Carlson of USC outdueled Arizona’s Margo Geer in one of the closest 100 freestyle races start-to-finish you’ll ever see.

UCLA got a win in the women’s mile when Lauren Baker went 16:06.86 to beat the field by 6 seconds. That’s just 2 seconds off what Baker went at NCAAs last year. Kaitlin Pawlowicz was second in 16:12.39 and Penn State’s Megan Silverling took third overall, going 16:17.75. Another UCLA Bruin, Katy Campbell, was fourth overall, followed by Texas’ Kelsey Leneave.

Bonnie Brandon has been the star of this meet so far for the Arizona women, and she continued that trend by going 1:50.70, the second-fastest time in the NCAA this year, to win the 200 back. She crushed the field by two-and-a-half seconds, coming home in a blistering 28.30 on the final 50. Second place was USC’s Kendyl Stewart (1:53.10), third was Tasija Karosas of Texas and fourth went to USC’s Henriette Stenkvist.

Texas got a huge swim from freshman Jack Conger in the 200 back – Conger busted a 1:40.90 to outduel defending NCAA champ Drew Teduits for the win. That time ranks 3rd in the NCAA right now for Conger, just behind Cal’s Jacob Pebley who went 1:40.72 across the country at Winter Nationals. Teduits took second place overall in 1:41.10 and fellow Big Ten competitor Nate Savoy was 1:42.26 for third. Will Glass of Texas also went sub-1:43 in taking fourth. On top of that, Arizona’s Shep Sheppard went 1:42.46 to win the B final.

The 100 free looked close coming out of prelims, but no one could have predicted just how tight a race it would be at night. USC’s Kasey Carlson and Margo Geer of Arizona battled back and forth, with neither swimmer ever taking a lead of more than .05 at any wall up to the finish. Carlson won the event in 47.22 with Geer second in 47.35. But take a look at the splits along the way: at the 25, Carlson was up 10.74 to 10.79. The two were exactly tied, down to the hundredth, at the halfway mark and at the 75 wall Carlson again led 34.76 to 34.79. It doesn’t get much closer than that folks, and the two put on a show en route to the two fastest times in the NCAA this season.

The top two seeds in the men’s 100 free were tied coming out of prelims, but the winner of the event actually passed up both during finals – Brad Tandy went 42.71 to win the event two days after going 18.9 in the 50 free here. Tandy is still swimming unattached, but is a junior college transfer who will compete for Arizona next year, if not next semester. Jimmy Feigen came from the fourth seed to take second in 42.74 and current Texas swimmer Caleb Weir went 42.86 on the same night his older sister Amanda was the national runner-up in this event in Knoxville.

After being upset in the 100 breast last night, Laura Sogar was all business tonight, taking home the title in 2:08.01. Arizona’s Emma Schoettmer did her best to steal the race, closing on Sogar hard over the final 100, but was forced to settle for second in 2:08.44. USC’s Stina Gardell was third with a time of 2:09.75.

Arizona’s Kevin Cordes didn’t break another American record, but he did dip back below 1:50 in the 200 breast for the first time since NCAAs last year. He went 1:49.38, easily the fastest time in the nation, and was out in 52.0 at the 100, which would be the fastest 100 breast time in the NCAA on its own. Cordes made a group of 4 guys going 1:55 look overmatched, which is a pretty rare accomplishment in swimming. Sam Rowan, Will Licon, Thiago Parravicini and Andrew Sovero were all 1:55 in the race, separated by just .13 while taking 2nd through 6th.

In what’s been a tough meet so far for Jasmine Tosky, this has to feel good: Tosky went a lifetime-best 1:53.84 to win the 200 fly and take over the second-fastest swim in the NCAA this season from Louisville’s Kelsi Worrell, who swam earlier at Winter Nationals. Tosky blew away the field and her prelims time by two and a half seconds each in the swim. Noelle Tarazona of UCLA took second, going 1:56.55 and top seed Andrea Ward was third in 1:56.79, just off her lights-out prelims swim. Penn State’s Gabi Shishkoff and Arizona’s Ashley Evans took fourth and fifth.

Michael Meyer came back from an almost-1 second deficit to win his third event for Arizona in the 200 fly. He went 1:43.82, just off his morning swim, to come back and beat USC’s Michael Domagala, who led by nine tenths at the 100. Domagala finished second in 1:45.05, holding off a charge from Harvard’s Jacob Luna (1:45.07). Clark Smith was fourth for Texas, touching out Arizona’s Matt Barber by .01 and Wisconsin post-grad Dan Lester by .04. Clay Youngquist of Texas was also not far behind while taking 7th.

The Arizona women blew away the NCAA “A” cut in the 400 free relay, going 3:14.05 and holding off a charging USC (3:14.32) for the win. Bonnie Brandon was 48.2 on the leadoff and Margo Geer swam second, splitting 46.5 to give the Wildcats a lead. USC got a big leadoff leg from Kasey Carlson (47.54), fell behind to Geer’s split, but started clawing their way back in on the final two legs. But Arizona anchor Taylor Schick held off Chelsea Chenault to win things for the Wildcats. Texas took third in 3:15.93 and UCLA was fourth, going 3:17.09.

Texas won the men’s 400 free relay, going 2:51.50, a time that would have been number one in the nation before tonight, but now trails only California, who won the national title at Winter Nationals in Knoxville earlier tonight. Matt Ellis was a 43.07 leading the Longhorns off and Caleb Weir added a 42.70 anchor leg. They beat out USC, who went 2:53.10, although the Trojans did have the fastest split of the field in Dimitri Colupaev’s 42.39. Harvard took third overall on a 42.9 anchor leg from Chris Satterthwaite and Arizona took fourth. Giles Smith trailed only Ellis after his 43.42 leadoff leg. Penn State took fifth (John Hauser was 42.92 for the Nittany Lions) and Wisconsin was sixth.

Interesting. Just as we begin to worry about Tosky she roars back on the last day with a great 200 fly. She did something very similar at NCAAs last year. Her first 100 fly is about 2 tenths faster than she split in the relay. This is very weird and I would love to see her back to her bests in all of her events.

Yes it’s very very very weird. I was light years away from thinking she could swim 1.53 in the 200 fly after such a bad meet so far.
I’m happy for her. 🙂