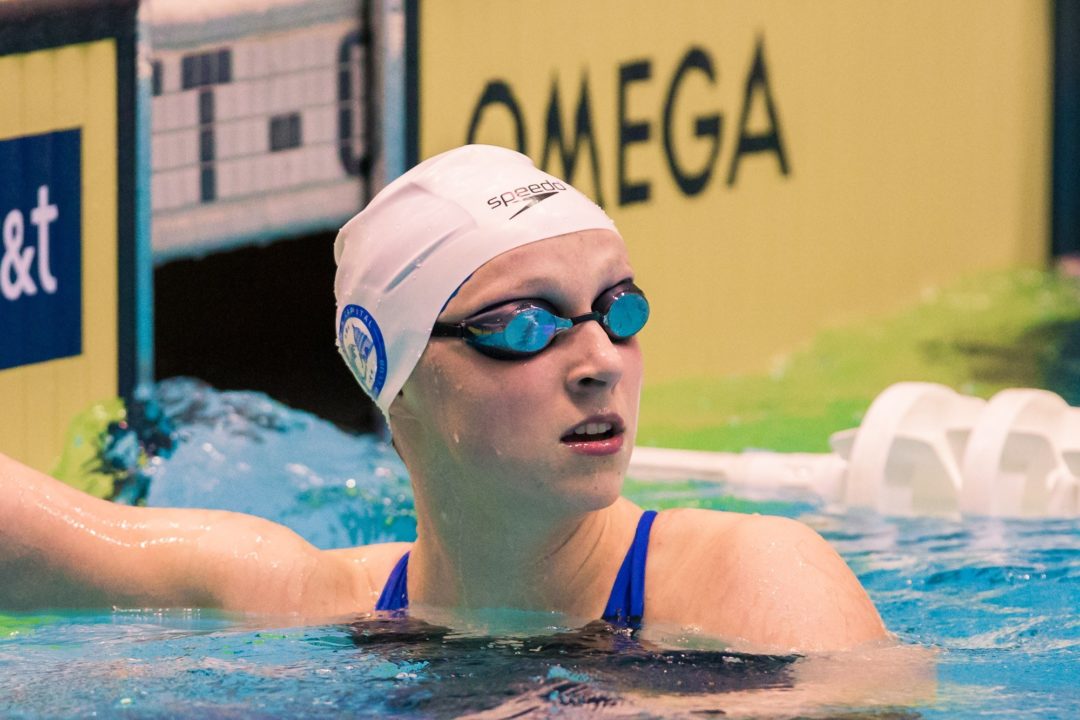 Katie Ledecky tore the old American record to pieces in the 1650, going an insane 15:15.17 to open up the night. Current photo via Tim Binning/TheSwimPictures.com

Teammates and international superstars Liz Pelton and Missy Franklin will go toe-to-toe in the women’s 200 back, Katie Ledecky will chase the American record in the 1650, and Jamaican Alia Atkinson aims for a meet record in the 200 breast. On the men’s side, Nathan Adrian leads a stellar men’s 100 free field where the top 8 were separated by only .76 this morning and super Cal freshman Ryan Murphy holds the top seed in the 200 back.

Katie Ledecky started Saturday finals out with a bang, smashing the American and U.S. Open records in the 1650 in a dominating 15:15.17 performance. Ledecky had the entire national championship field lapped by the 1200-mark and was at one point as much as 10 seconds under record pace. The old record was set by Katie Hoff back in 2008: 15:24.35. That means the 16-year-0ld Ledecky put up the fastest 1650 in history by 9 full seconds. It’s getting hard to find enough adjectives to describe Ledecky, who sprung onto the national scene just in time for the 2012 Olympics and appears to be just getting started on a career arc that could do sizable damage to the record books.

Connor Jaeger of Michigan took the men’s mile, going 14.39.02 and starting off a 1-2-3 finish for swimmers training in Ann Arbor this year. Post-grad Michael Klueh was 14:40.20 in pursuit of Jaeger and the Wolverine’s Dutch representative Anders Nielsen took third in 14:47.88. Those times constitute the top 2 times in the NCAA this year for Jaeger and Nielsen.

The much-hyped showdown between Liz Pelton and Missy Franklin in the 200 backstroke never really materialized. Liz Pelton didn’t let it. Pelton swam away from the field, Franklin included, early on, buiding a huge lead at the 100 that no one could put a dent in. The American record-holder went 1:49.59, just missing the meet record, which belongs to her teammate Franklin. For her part, Franklin held off charges from a tough field to take second place, going 1:51.54. Indiana’s Brooklyn Snodgrass took third, going 1:52.68 to just beat out Cal’s Melanie Klaren, who was charging through the field in the final 50 with her eye on a 1-2-3 finish for Cal. Klaren went 1:52.84 for fourth place, followed by two more Cal Bears – Stephanie Au and Sophia Batchelor. Indiana’s Cynthia Pammett took seventh and high-schooler and NCAP star Janet Hu was eighth after winning a swim-off this morning just to make the A final.

In the men’s 200 back it was Russian Olympian Arkady Vyatchanin who blew away the field, winning in 1:37.87. A pair of young Cal Bears took the next two spots, Jacob Pebley took second from all the way out in lane 8 (1:40.72) and top-seeded Ryan Murphy was third, going 1:41.02. That time for Pebley ranks number 1 in the NCAA this year, and Murphy sits number 5.

Andrew Seliskar of NCAP won the B heat, dropping nearly two seconds from this morning to go a lifetime-best 1:42.23, which would have placed him fifth overall.

Natalie Coughlin led the whole way in the women’s 100 free, going 47.19 to hold off a late charge from Amanda Weir. Coughlin was just .3 off of her own meet and American records. Weir took second place, going 47.37 and Missy Franklin came off of the 200 back to put up the top NCAA time of the year while taking third in 47.42. Franklin was also the fastest swimmer in the pool over the second 50.

SwimMAC’s Arianna Vanderpool-Wallace came in fourth in 48.21, just ahead of Traycie Swartz out of the University of Utah. Cal’s Rachael Acker took sixth, future Stanford Cardinal Janet Hu was seventh and Tennessee’s Faith Johnson took 8th in the A final.

California swimmers won all three heats: Kaylin Bing was 48.91 to win the B final and Farida Osman dropped almost a full second to take the bonus final in 49.00.

South African Darian Townsend was fourth in 42.13, Louisville collegian Joao de Lucca was fifth in 42.24 (the second-fastest NCAA time of the season), and Josh Schneider took sixth. Nick Soedel and Karl Krug rounded out the top 8.

Jamaican Alia Atkinson took home the 200 breast title, although she missed the meet record of 2:05.04, going 2:06.22. Micah Lawrence took second place in 2:08.93. Three more swimmers got under 2:10 on the day: Stina Colleou from the University of Utah was 2:09.50, Haley Spencer, a former NCAA champ at the University of Minnesota, was 2:09.80 and Justine Mueller out of T2 Aquatics was 2:09.88. Indiana’s Bronwyn Pasloski was sixth, Cal’s Marina Garcia seventh and Michigan’s Angela Chokran eighth.

Tennessee grad Brad Craig led all 200 yards of the men’s breaststroke event, going 1:52.99. Former Harvard star Chuck Katis looked like he might make a run at about 125 yards in, but Craig was able to keep Katis at bay. Katis was forced to settle for second place, going 1:53.84, a lifetime best. Louisville’s Addison Bray is having an outstanding weekend, and he took the bronze medal, going a lifetime-best 1:54.89, his second PR of the day.

2012 Olympian Claire Donahue went out like a rocket in the women’s 200 fly, leading by nearly a full second at the 100 but wasn’t able to hold on, fading all the way to 7th. Top-seeded Kelsi Worrell came back for the national title, taking another seven tenths off her lifetime-best prelims swim. Worrell was 1:54.12, the second-best swim in the NCAA this season, leapfrogging her teammate Tanja Kylliainen. (Kylliainen is not swimming this meet as she is competing for Finland in the European Championships). Worrell is new to the 200 fly, but Louisville’s coaching staff has to be seriously considering swimming her there instead of the 100 free come conference and NCAA time, considering her performances today.

Following her was the Cal pair of alumni Caitlin Leverenz and undergrad Rachel Bootsma, both of whom were 1:55. Indiana’s Brenna Maclean took fourth, also in 1:55. 17-year-old Remedy Rule of SMAC took fifth and Indiana’s Gia Dalesandro was sixth. Next was Donahue (who went from 2nd to 8th over the final 50) and eighth was Cal’s Sophia Batchelor.

In the B final, Heather Lundstrom of Tennessee (1:56.60) just touched out Hannah Saiz (1:57.10), who swam her college years at Kenyon and Celina Li (1:57.37) of Cal. All three women were significantly faster than their prelims swims.

Dylan Bosch now leads the NCAA by 1.7 seconds in the 200 fly after going 1:41.01 to win a national championship. The Michigan Wolverine went out in 48.0 on his way to the win. Second place was Andrew Seliskar, who moved to within a second of the 17-18 National Age Group record held by Tom Shields. Seliskar was 1:42.55. Arizona State Sun Devil Alexandru Coci was third, going 1:43.27 to just nip Will Hamilton’s 1:43.33. Michigan’s Kyle Whitaker followed them closely, going 1:43.81.

Cal’s Marcin Tarczynski took sixth, Michigan’s John Wojciechowski seventh and Utah’s Bence Kiraly rebroke his own Ute school record from this morning, going 1:45.73 for 8th place. The previous record was 20 years old; Kiraly first broke it in the prelims. This has been a huge weekend for the Utes, who have already broken 5 school records today alone.

California put the exclamation point on a big-time championship meet by sweeping the top two spots in the 400 free relay and breaking a meet record in the process. The top team of Rachael Acker, Liz Pelton, Kaylin Bing, and Missy Franklin went 3:13.45, the second-fastest time in the NCAA this year. Acker led off in 48.7, Pelton was 48.5, Bing went 48.3 and Franklin anchored in 47.8, a collective testament to how scary good Cal can be on relays this year.

The Cal B team was second overall, with Farida Osman leading off in 49.2 and Camille Cheng, Caroline Piehl and Cindy Tran all splitting 48s. That team finished a half-second ahead of SwimMAC, which got the fastest split in the field from Arianna Vanderpool-Wallace (47.74) in taking third overall.

Indiana was fourth, getting an NCAA A cut, and Tennessee took fifth thanks to anchor Lindsay Gendron’s 47.81 split.

NCAP took 8th overall to close a busy weekend that included multiple NAG records. Janet Hu led off in 48.99 to set the relay up in the first heat, and the team used the clean water to go 3:20.32.

Seth Stubblefield ran down the Louisville Cardinals to win the 400 free relay, setting a new meet record in 2:51.16. Stubblefield was 42.4 on a unique anchor leg that saw him attempting to both run down Louisville’s Trevor Carroll and hold off a surging Cullen Jones of SwimMAC from the very outside lane. Stubblefield did both, and with some help from his relay-mates (Tyler Messerschmidt, 42.9, Ryan Murphy, 42.4, and Fabio Gimondi 43.3) took home the national title for Cal.

Louisville was 2:51.88, the second-fastest time in the NCAA this season behind Cal, taking the lead on Joao de Lucca’s 41.39 split (he swam second).

In the overall team points, California was the big women’s winner to little surprise. The Golden Bears were over 250 points ahead of nearest competitor NCAP. The Michigan men beat out SwimMAC by just 50 points to take the men’s team title, giving the Wolverines some momentum in a season where they’ve really flown under the radar while attempting to defend an NCAA title. NCAP won the combined men’s and women’s point total.

Missy Franklin and Andrew Seliskar were the high points winners for the women and men, respectively. The performance of the meet award went unsurprisingly to Katie Ledecky for her mind-numbingly fast 1650 to kick off the evening.

Katie Ledecky in the 1650 free.
American record? I don’t think so. But I will be happy if I’m wrong.

Nathan Adrian in the 100 free.

Natalie Coughlin should win the 100 free. If Missy wins it after the 200 back, she’s Wonder Woman.

Andrew Seliskar in the 200 fly.

Just what I want to watch the most.

She is crazy amazing fantastic!