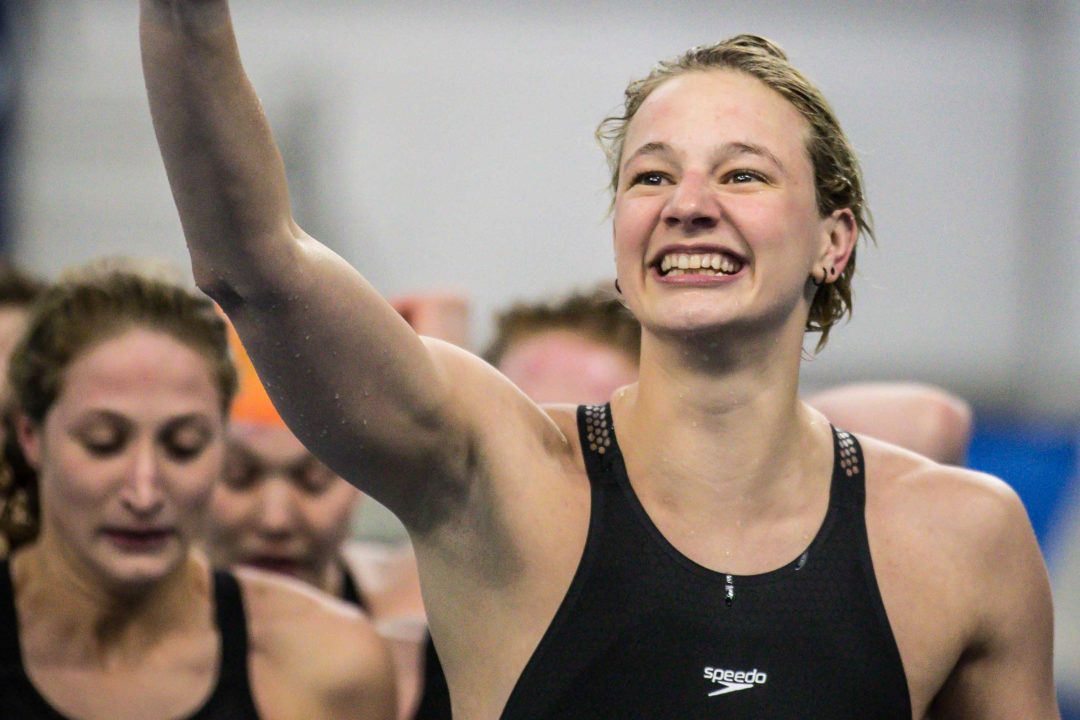 The swim for Banic, who finished her college career in the spring of 2019, is her best time in yards by half-a-second. She swam a long course best in January. Archive photo via Jack Spitser/Spitser Photography

University of Tennessee post-grad Maddy Banic swam a 50.69 in the 100 yard fly on Friday during practice.

Swimming in the school’s older indoor pool, without a wedge on the blocks, Banic put on a (competition legal) race suit and cut half-a-second off her lifetime best in the event.

She swam her previous best time in the 100 fly in November of 2015, during her freshman season at Tennessee.

After that big freshman season, Banic had ups-and-downs in the pool during her time as a Tennessee undergraduate. Her only best times in yards in the last 2 years have been in the breaststroke events, where at a Last Chance Meet during her senior season she dropped time in both the 100 and 200 yard races.

In total, Banic collected 12 All-America certificates in her Tennessee career and won 9 SEC titles, including the 50 free individually in 2017 as a sophomore.

She swam at 2 International Swimming League meets last season representing the LA Current, both as a relay-only swimmer, including in the Las Vegas finale.

Banic has been very open about the mental health challenges she faced throughout her swimming career, including depression, anxiety, and alcohol abuse.

I hope coaches are thinking deeply about how they have changed practices since being back in the water and wether time off is beneficial to swimmers. Seems like time off + shorter practices + lack of distraction at practice because of social distancing + lack of pressure is paying off for some swimmers. I’ll be curious to see how many programs use what they have learned and how many race back to the old ways.

Not to mention being able to actually swim fly with less threat of smacking arms in a crowded lane of circle swimmers.

Went past 15 on start. Shocker

You must have magic eyes if you can tell from that video whether she was up before or after 15 meters.

Awesome to see her swimming fast!

This is truly awesome. How many coaches are patient enough to work with kids 5 years to see .5 seconds improvement and how many young adults are willing and passionate enough to stick with it. Mind you, .5 seconds at that level can make all the difference. Serious props to both Matt and Maddy. Good to see positive outcomes after shutdown. Hopefully this encourages everyone.

Impressive! Glad she is on an upward trajectory. Excited to see how she fares coming into this Olympic year.

Wow amazing swim – In that old slow pool this time would be more like 49.6 in deep water with wedge block!

Honest question—does it make that much difference?

Either way congrats on a big swim Maddy!!