When 72 Points Vanished in One NCAA Final: The Infamous Medley Relay of 2007 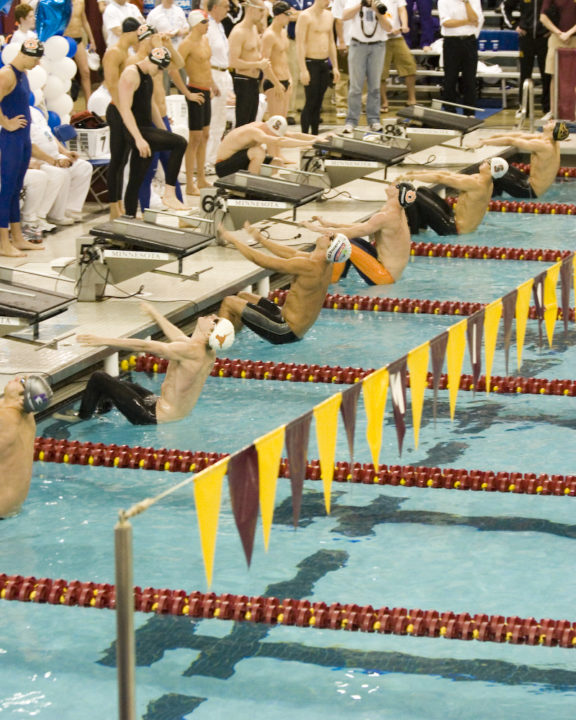 Relays get disqualified all the time, but it's rare to see a heat where three relay teams get disqualified, especially in an NCAA championship final. Archive photo via Tim Binning/TheSwimPictures.com

Follow along here for live updates and analysis as racing gets underway on night 4 of the Canadian Olympic Swimming Trials.

Relays get disqualified all the time, but it’s rare to see a heat where three relay teams get disqualified, especially in an NCAA championship final. Yet, that crazy scenario is exactly what this article is about.

The NCAA Championships is one of the most intense competitions a swimmer might compete in, and falls just short of the U.S. Olympic Trials in terms of the cut-throat attitudes of the athletes and coaches vying for titles and a spot in history.

While an individual title is one of the most special things a swimmer might achieve in their career, be they competing at the Division I, Division II, or Division III NCAA Championships, athletes tend to value shared victories with their teammates above their individual accomplishments. For this reason, relays hold a special place in the hearts of all swimmers, and relay victories account for more vivid memories than individual triumphs. Furthermore, relays are worth double points, which makes them instrumental to team titles.

First place in a relay at the NCAA Championships will earn a team 40 points, while eighth place is worth 22 points–2 points more than an individual victory. Needless to say, there is a lot of pressure to perform well on relays.

The stage was set for the final of the men’s 200 yard medley relay at the Men’s 2007 NCAA Championships. 32 men on 8 teams approached the blocks, ready to do battle. Some had already been to the Olympics while others would get their first taste of Olympic competition 15 months later in August of 2008 in Beijing.

Townsend already had an Olympic gold medal from the men’s 4 x 100 freestyle relay in Athens as a member of the South African team. Subirats, meanwhile, would go on to win a bronze medal for Venezuela at the 2007 FINA World Championships in the 100 butterfly just weeks later, finishing behind Americans Michael Phelps and Ian Crocker in Melbourne. Subirats made history at the 2007 NCAA Championships by becoming the first man to go 44-seconds in both the 100 butterfly (44.57) and the 100 backstroke (44.83), winning both, while also being part of a three-way tie for 2nd 50 freestyle. The 200 medley relay, however, was not so kind to the Arizona Wildcat.

The victors were decided 1 minute and 23.73 seconds later when Auburn’s Cielo powered his 50 freestyle home in an 18.42. Auburn played catch-up with Arizona following Subirats’ 20.5 split in the 50 backstroke, blowing away Auburn’s Scott Goodrich who posted a 21.51, as well as the rest of the field. David Maras went in next for Auburn, splitting a 23.40 on the breaststroke, handing over to Alexei Pusinski who dropped a 20.04 on the 50 fly. Pusinksi hit the turn at 25 yards in a blazing 8.89 seconds, putting him on-par with the freestylers who would go in the water after him.

Auburn broke the NCAA and U.S. Open Records in finals, taking the mark from 1:24.00 to 1:23.37. Northwestern and Arizona also got under the previous records with times of 1:23.73 and 1:23.92, respectively. Unfortunately for the two teams of Wildcats, neither time would count.

Minnesota rounded out the race with a 1:27.09, which put them in 8th place until the DQs started rolling in.

Unfortunately, splits for the three disqualified teams have proven elusive, though they would be fascinating to find. The split on the final 25 of the race can be seen in the picture, but that is only a small insight into the performances of the Northwestern, Arizona, and Texas swimmers.

Moments later, the crowd learned that Northwestern (2nd), Arizona (3rd), and Texas (4th) had been disqualified. All of a sudden, Minnesota had moved up to 5th place, meanwhile, Indiana held onto 9th place, with zero points awarded for 6th, 7th, and 8th-place teams. In one fell swoop, 72 points vanished from the NCAA Championships potential point total, also making for perhaps the emptiest relay podium at an NCAA Championships.

All of the DQs were the result of swimmers jumping early. For Northwestern, Bruno Babic jumped -0.06 before his teammate on the fly leg got their hands on the wall. Texas’ plight also came on the fly-to-free transition when Garrett Weber-Gale left -0.02 before Ricky Berens hit the touchpad. Arizona’s early takeoff came on the breast-to-fly transition when Darian Townsend jumped -0.03 before breaststroker Ivan Barnes registered his split on the touchpad.

Auburn’s pool record has been lowered multiple times and now stands at 1:21.82, set by the University of Southern California at the 2018 NCAA Championships. Auburn’s pool record in the 200 freestyle relay, also set at NCAAs in 2007, stood until 2018 when it was finally eclipsed by Florida (1st), NC State (2nd), and Cal-Berkeley (3rd) in the ‘A’ final at the 2018 NCAA Championships.

This photo vault by Tim Binning as well as this collection of photos by Northwestern provides an interesting and nostalgic look back at NCAA swimming in 2007.

Lane 1 is at the bottom of the screen, lane 8 is at the top.

Forgot SMU was top 8 that year! That 2007 meet was wild and exciting. Making me feel old that the 2007 NCAA Champs is now a teenager…

SMU ends up 4th and doesn’t even get mentioned in the article! LOL. 🤷🏻‍♂️🙄

In all fairness they did finish in 7th place and only moved up to 4th because of the disqualifications.

A future world champ was on that relay too!

Funny you mention that. I’m pretty sure something similar happened in the 2009 NCAA Championships for D2 in the 200MR…and Hetland was part of that, too…..and at the time had the fastest 50Br split ever

Curious to so I looked up NCAA times through USA Swimming and the archived meet results from here. Here some notable swims.

Looks like Neil Walker broke 45 back 1997 which must have been absolutely bonkers.

Ian Crocker was the first to break it in fly, and did so at some point during the 2004 season, but that year NCAA’s was held in SCM.

During the 2006 season Lochte uncorked a 44.6 leading off the UF medley relay but did the 400im individually

We were robbed of possibly have THREE guys do it at NCAAs this year. Coleman DID do it in… Read more »

I was told there would be no math involved…….but if the 2nd-3rd-4th place finishing teams all DQ’d wouldn’t that be 96 missing points??

The remaining teams moved up, so the points lost were from the 6th, 7th, and 8th places

Nope. Because other teams move into those slots. 6th, 7th, and 8th are the spots that are empty.

It might be true that 72 points were not awarded, but 96 points were lost. Northwestern lost 34 pts, Arizona lost 32 pts, and Texas lost 30 pts because of their DQs.

Maybe it would be more accurate to say 72 points vanished.

Maybe. But nobody said “72 points were lost.” The headline says “72 points vanished.” Buckeye Boy said “Missing points.” In both cases, 72 is the number of points that vanished and are missing.

love the down vote for math…

“I was told there would be no math involved” is a now obscure 70’s SNL Chevy Chase does Gerald Ford at presidential debates reference. Immortalized during ongoing club swimming in-practice banter(essential at the best teams) between Davis Tarwater and his coach at the time, i.e., “ I was told there would be no mindless yardage involved“.
Serious props and thanks to buckeyeboy for usage and evoking a good memory.