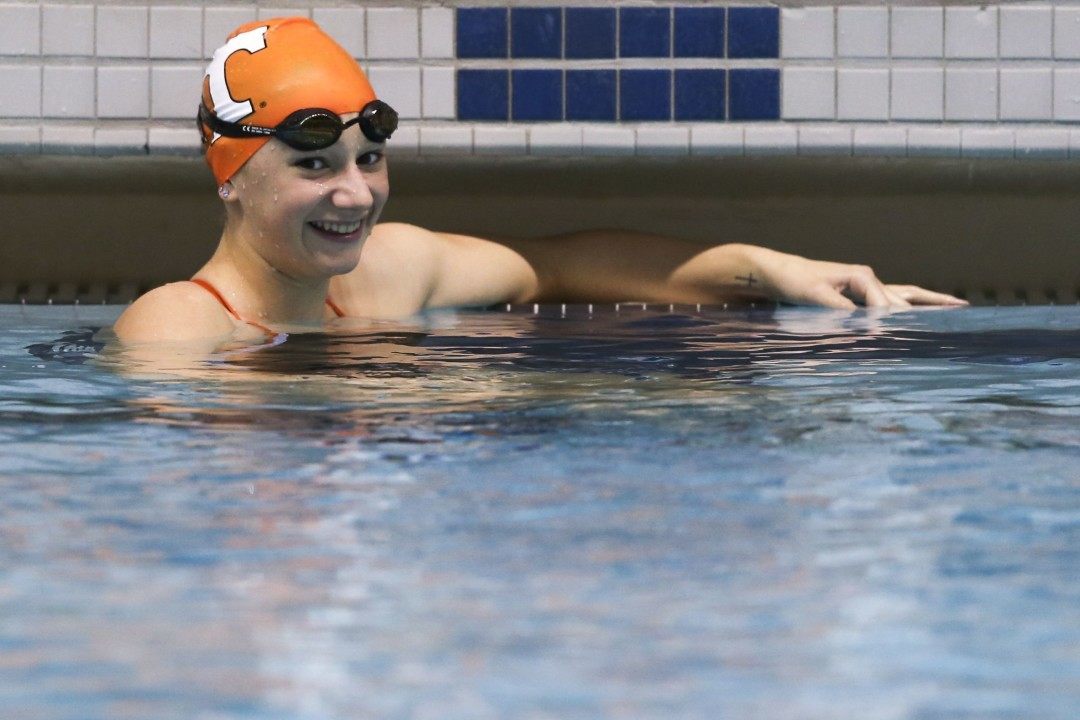 In a blog post on Tuesday, Banic explained being taken away in an ambulance from the 2017 NCAA Championships and her absence from the Tennessee roster for the first-half of last season.

2017 SEC Champion Maddy Banic has opened up about her dealings with depression, anxiety, and alcohol abuse, in hopes of helping others in the situation. In a personal blog post, Banic explains that it was an anxiety attack that caused her to be taken away from the 2017 NCAA Championships in an ambulance. She says that after medicine and therapy didn’t help improve her mental health, she turned to alcohol, and would eventually enter a rehab facility.

The post sheds light on Banic’s previously-unexplained absence from the Tennessee roster for the first half of the 2017-2018 season.

“I wanted to be able to show that it’s okay to ask for help if you are in trouble,” Banic told SwimSwam about her intent for the post. “And not just ask for help, but it’s okay to step away and put yourself first. It’s hard to do as an athlete. We are so used to routine and pushing through whatever is thrown at us that the idea of admitting we need help is scary. You hear about athletes with depression and anxiety, but rarely do you hear about an athlete giving up their sport and taking the step leave and go get help. I want people to understand that is okay and people do that, even at a elite level. That scary step can lead to you coming back better than ever. As an athlete, teammate and a person.”

Banic is an 8-time NCAA All-American and 6-time SEC Champion, including individually in the 50 free in 2017. In addition to her individual sprinting, she’s become a bit of a catch-all leg for the Volunteer medleys, filling in weak points: including swimming breaststroke on the medley relay as a freshman in 2016.

“I also wanted to share because the role thaat the NCAA rules played when I (returned to Tennessee) m ade the transition more challenging than it should have been. I wasn’t allowed to train in the facilities, with my team, or communicate with my coaches about swimming. I want to jumpstart a change in these rules. An athlete should not be punished for focusing on themselves by being forced out of their team the rest of a semester when they return.

“I didn’t address this much in my story, but it is a more back burner reason why I shared that I planned to bring up at the right time.”

Banic says that because she had to withdraw from classes to attend the facility, she became temporarily ineligible. She says that she thinks there should be a special rule in “an extraordinary circumstance” where the ineligibility is driven by a health issue. She says that she doesn’t blame the NCAA for having the rule (which is mostly designed to help students struggling academically focus on school), but that she thinks that the NCAA doesn’t historically have a plan to deal with these situations, and that they should.

The most poignant part of the post comes near its end, where Banic reflects on her current position:

“A year later, I am thriving and not just surviving, which is not something I have been able to say in a while. My mindset is more motivational than it ever has been. I have big dreams, I have a hope for the future and I have so much love for my team. I am excited to come into practice every day and learn something new. I dream about racing and winning finishes along side my Lady Vols. . I go to classes with a determination to push myself and do the best I can.  I come home every night to my baby girl, Remi (border collie, very cute), and I can finally get a good. nights. sleep. Sure, I still have my hard moments. You can’t be perfect  and its okay to take a step backwards every once in a while. But I am finally moving forward and getting better.

I didn’t want to share this story. I struggle with being vulnerable. I like to portray myself as a superhero badass, but even superheroes have their weaknesses. Everyone has a weakness, and that’s okay.  Especially as an athlete, was are supposed to be invincible. Grit our teeth and take the pain. Be the role model for fans people who look up to us. But we aren’t perfect, we are still human, and humans hurt. I want to share my story because I hope it can show that it is okay to hurt, and it is okay to be slipping. It is okay to ask for help. Someone cares, and if you don’t believe that, then know I care. I’ve felt the pain, the emptiness, the loss of any hope. Listen to me, you deserve so much more. So do something scary. Make a hard decision and reach out. One leap of faith is all it takes. I promise, you will not fall.”

Would she not be able to swim on her own, and be given “optional” workouts from the staff, like during the off-season?

During the off season athletes are still considered eligible collegiate swimmers by the NCAA. In Maddy’s case, because she was not enrolled during the semester referenced, she was not eligible and therefore could not train with her team, be coached by the team coaches or use team facilities. With overdue attention to the need to nurture the “whole” student athlete’s health and well-being, the NCAA should address this gap and create a way to permit a short term absence.

Thank you for telling everyone your story. It is so important that the mind finally be regarded as part of the body at least in a health and wellness sense. Your coming forward is inspiring and will definitely help others.

you are a superhero badass

Thank you for sharing and here’s to more thriving for you! XO

Brave post. University mental health systems – and most student-athletes – are drastically underserved and understaffed. I hope this starts to change.

Kudos! And thanks for sharing! All the best for the future!

Thanks for sharing Maddy and good luck this upcoming season! You’re a good role model for your teammates and hopefully this sparks other leaders on teams to feel comfortable with the Mental Health topic.

This article is so important.