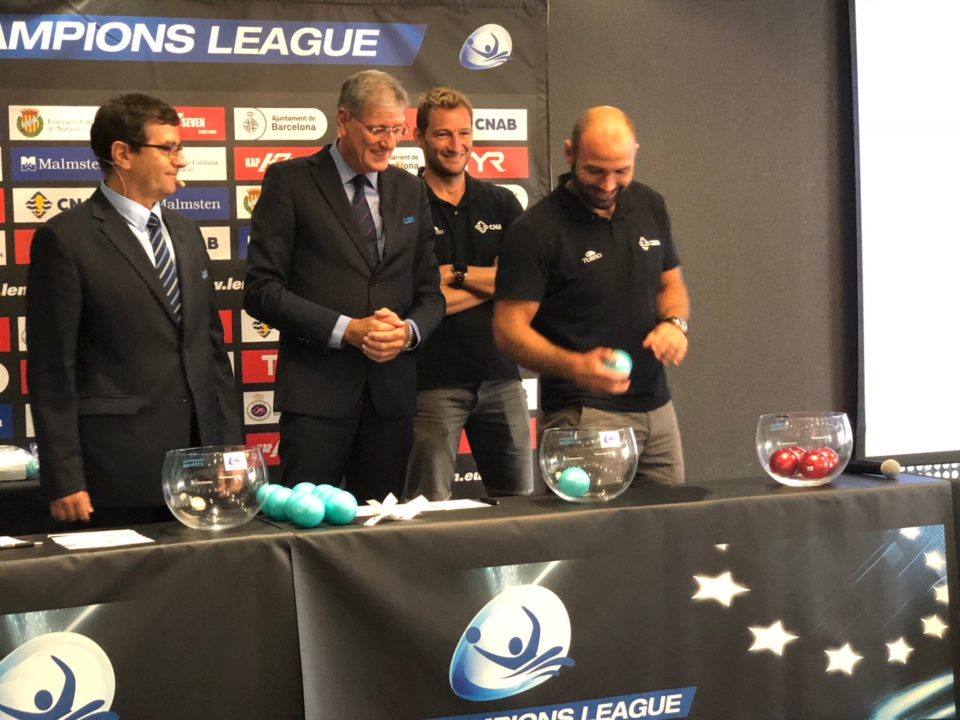 Title-holder Olympiacos (GRE), 2017 champion Szolnok (HUN) and 2016 winner Jug (CRO) will play in the same group in the upcoming season of the Champions League, according to the draw held in Barcelona on Wednesday. Current photo via LEN Media

Title-holder Olympiacos (GRE), 2017 champion Szolnok (HUN) and 2016 winner Jug (CRO) will play in the same group in the upcoming season of the Champions League, according to the draw held in Barcelona on Wednesday. Interestingly, winners of the preceding three occasions, Recco (ITA, 2015), Barceloneta (ESP, 2014) and Crvena Zvezda (SRB, 2013) will entertain each other in the other group.

After the highly successful European Water Polo Championships in July, the water polo family returned to Barcelona where the draw for the preliminaries and the wild-card holder clubs meeting was held. With some great plans with water polo on the horizon, to be revealed in the near future, the draw was opened by representative of the City Council, Sport Commissioner Marta Caranca and Enric Bertran, Vice President of the Royal Spanish Swimming Federation, President of the Catalan Swimming Federation.

The draw saw the winners of the previous six editions being sorted equally to the two groups – courtesy of two the greatest stars of Barceloneta, Felipe Perrone and Dani Lopez who ‘handled’ the balls, this time a bit smaller ones than in the pool. In group A, Olympiacos Piraeus and Jug Dubrovnik are to meet again in the prelims, just like in last year, while Pro Recco and Eger will clash for the third straight season.

There were two changes in the field of the wild card-holders: Crvena Zvezda replaced Partizan from Serbia while 7-time winner Mladost Zagreb (CRO) stepped in from the waiting list instead of Alphen (NED). Both returning sides will face a series of tough challenges: in fact, Mladost was drawn to the same group with fellow Croatian side Jug and group B will also offer an in-house battle of the German teams Spandau and Hannover. Since Hannover is the host of the Final Eight, it enjoys an automatic berth, leaving three spots available for the others in this group.

The qualification kicks off next week, at the end of the process four more sides will join the 12 seeded clubs. Since a couple of ‘heavy-weighters’ are among the teams seeking qualification, including F8 participant Brescia (ITA), Montenegrin champion Jadran and 2017 and 2018 Euro Cup winner Ferencvaros (HUN), the final line-up of the groups will promise even more excitements.

The prelims will start on 17 October and will follow the same format as in the last season – sixteen teams will play on home-and-away basis and after 14 rounds the top four ranked sides can head to Hannover for the Final Eight, scheduled for 6-8 June 2019.