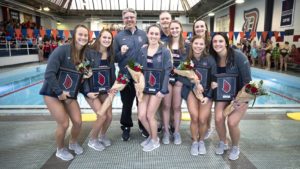 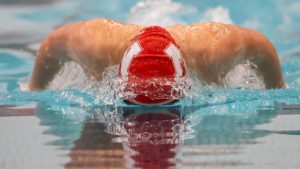 The Stanford men remain undefeated in dual meet action after winning a nailbiter on the road against Pac-12 rival USC on Saturday.

After being absent from competition for the first half of the season, All-American Megan Byrnes and NCAA champion Simone Manuel made their 2017-18 debut.

Austin Katz and Justin Wright threw down the fastest college times this season in the 200 back and 200 fly, respectively, on the final of the 2017 Texas Invite.

Schooling wins Battle vs. Conger with 44.7 100 Fly at Texas Invite

Swimming fans got to witness another butterfly battle between Joseph Schooling and Jack Conger in Friday night’s 100 fly final.

Stanford Men Back In Action With Dual Meet At Utah

Stanford’s men’s swimming and diving team starts its 2017-18 season this upcoming weekend when it travels to Salt Lake City for a coed conference dual meet at Utah.

A stacked distance group only gets stronger as Stanford brings in one of the nation’s better recruiting classes.

Three captains have been named for the Stanford men’s swimming & diving program. Seniors Patrick Conaton and Sam Perry, along with junior Matt…

Olympic gold medalist and World Record holder Ryan Murphy will take on the 100 back tonight.

Cal’s Andrew Seliskar will look to set up a sweep of the IM events, while teammates Ryan Murphy (100 back) and Justin Lynch (100 fly) seek their first individual titles of the meet.

Michael Cohn, Paul Li, Michael Leung and Chandler Pourvahidi of UC San Diego set a school record in the 800 free relay on Friday at the A3 Performance Invitational that the Tritons hosted at East Los Angeles College.