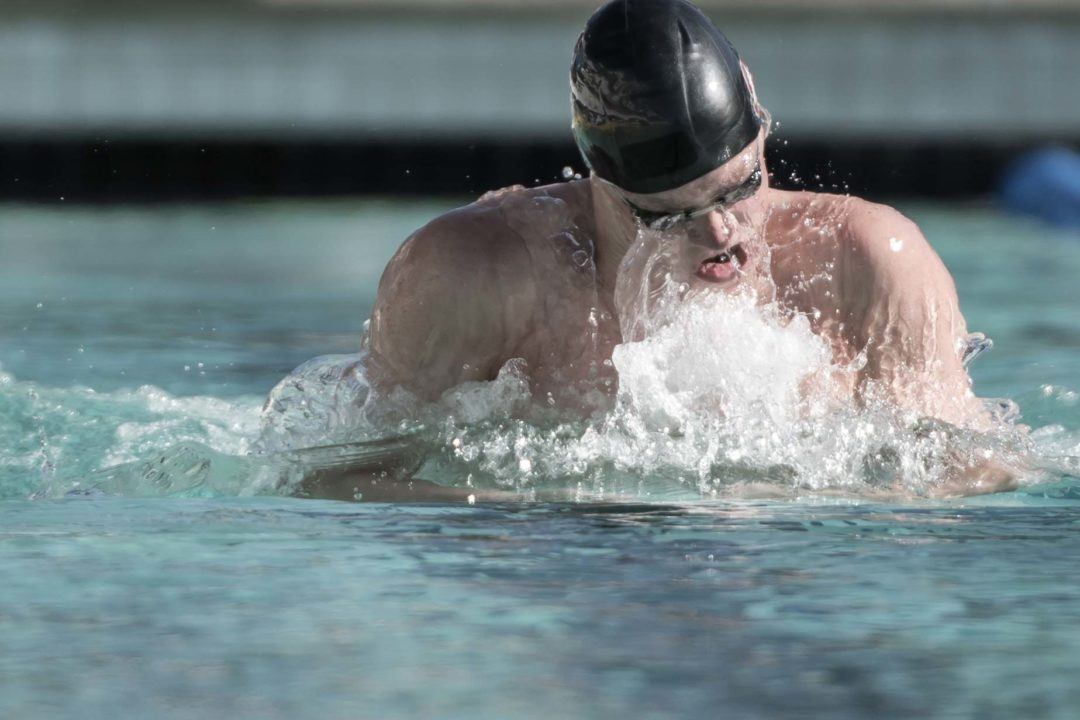 The Stanford men remain undefeated in dual meet action after winning a nailbiter on the road against Pac-12 rival USC on Saturday.

The Stanford men remain undefeated in dual meet action after winning a nailbiter on the road against Pac-12 rival USC on Saturday. The Cardinal has a chance to go undefeated this season with only Cal remaining on the dual meet schedule.

Brad Zdroik was one of Stanford’s top performers. In the 200 fly, he was neck-and-neck with USC’s Alex Valente through the front half, but used his back half speed to distance himself from the field as he won in 1:45.19. Zdroik nearly made it a stroke sweep, coming up just .01 shy to teammate Andrew Liang in the 100 fly, 47.01 to 47.02. Valente followed closely for 3rd in 47.22.

Matt Anderson also brought home an individual win for Stanford. Anderson and teammate Brennan Pastorek had a close race in the 200 breast, with Anderson pulling slightly ahead on the back half to win 1:58.76 to 1:59.06. USC’s Carsten Vissering followed in 1:59.44. Anderson also took 2nd in the 100 breast, touching in 54.40 behind Vissering (53.41).

Dylan Carter came up with a pair of wins for USC, touching in 1:36.07 for the 200 free win. He came back for the 100 free, using his front-half speed to take the edge over Stanford’s Sam Perry, winning 44.16 to 44.39. Carter was slightly faster on the leadoff split on the 400 free relay with a 43.92. Fellow All-American sprinter Santo Condorelli returned for the Trojans today after sitting out yesterday’s meet against Cal to rest his shoulder. Condorelli nabbed a win in the 50 free, as he was the only man to break 20 seconds in 19.73. Carter and Condorelli teamed up on the 200 medley relay, with Carter posting a 20.48 fly split and Condorelli putting up a 19.35 free split.

LOS ANGELES – No. 4 Stanford survived a narrow decision against No. 10 USC, beating the Trojans, 151.5-148, in a Pac-12 dual meet at the Uytengsu Aquatics Center on Saturday.

“We saw a lot of energy and spirit today, and it was a great day for racing against a really strong USC team,” said Goldman Family Director of Men’s Swimming Ted Knapp. “We’ll look to clean up a few things execution-wise as we head into the postseason.”

The Cardinal hung on to clinch the meet in the 400-yard freestyle relay, finishing second. Mestre, Perry, Cole Cogswell and Andrew Liang (2:56.11) were edged by .05 seconds.

Stanford returns to action on Feb. 17 when it hosts Cal at Avery Aquatics Center. The meet will start at Noon PT, with Senior Day ceremonies taking place prior to the meet.

The Trojans got off to a great start, winning the 200y medley relay. Freshman Robert Glinta, junior Carsten Vissering, and seniors Carter and Condorelli won the relay with a total time of 1:25.44, a season-best for the Trojans in this event. They were led by anchor Condorelli’s 19.35.

After being swept by Stanford in the second event, the 1000y free, USC rattled off three straight first-place finishes.

Stanford responded with a win in the 200y fly, before Condorelli captured first place in the 50y free with a time of 19.73.

Stanford won events 11-13, including a sweep of the 500y free. However, USC rallied in the final three events of the day.

Next, the Trojans travel to Salt Lake City in two weeks for a meet with the Utah Utes on Feb. 17 to close the regular season.

True sweetser DQ in 1000 game changer. His fast twitch muscles must have got the best of him when he twitched on the start. His starts have been looking dynamic, will be leading 500 at the 25 come March

The game changer was diving. USC going 1,2,3 in that is what made it a nail biter

From the splits, Sweetser must have gone around 8:58.

Glinta going to be huge, one of several freshman who will be huge this year at NCAAs

Haven’t seen Patrick Conaton in any Stanford meets. He’s a senior, captain, and NCAA scorer in the 200 Back last year. Anyone with knowledge of his situation?

Conaton was on the Stanford roster for the Cal/Stanford Triple Distance meet back in November. He is a senior. I will go across the Bay from Cal Berkeley to see the Cal/Stanford dual meet February 15th in Palo Alto (last dual meet for both teams before the PAC12 Championships at Federal Way, Washington) and see if he is still competing in the free and backstroke events.