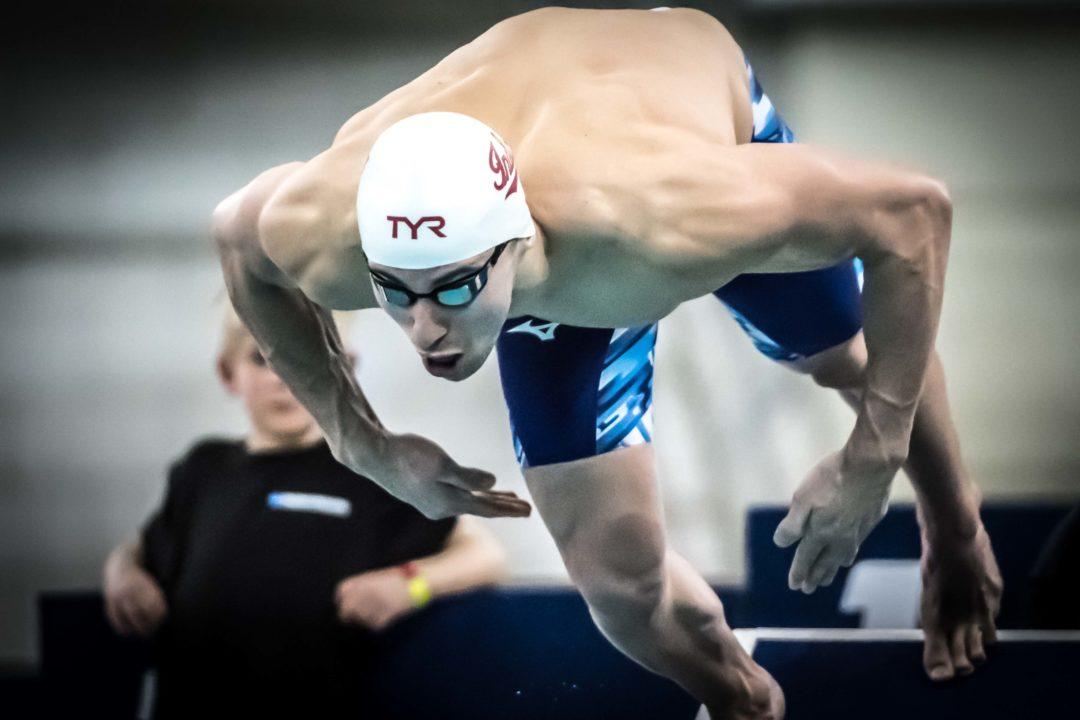 Blake Pieroni had an impressive swim in the 200 free at the Fran Crippen Memorial SMOC. Archive photo via Mike Lewis/Ola Vista Photography

Another action-packed night has wrapped up in Mission Viejo at the 2018 Fran Crippen Memorial Swim Meet of Champions, with some of the country’s top swimmers, along with some international talents, racing to some quick times.

Two of the top swims on the night came right off the hop in the 200 freestyle, where Chinese teenager Li Bingjie and American powerhouse Blake Pieroni earned victories.

Another swimmer who had a great night was Katie McLaughlin of Cal, who won the 100 freestyle last night in a lifetime best. Tonight in the 50 free she did so twice, first dropping her 25.41 (set this year in Santa Clara) down to 25.40 in the semis, and then took two more tenths off to win the final in 25.19. She’s now 8th among Americans this year, and runner-up Anika Apostalon (25.45) swam her fastest of the season.

@James How did Grant drop an in-season best if he went 1:48.37 at Santa Clara

Go Katie McLaughlin! Nice to see her making progress since the neck injury. Tough double – 400 IM & 50 free. Also the other day she did say on video she wants to sprint.

Who thinks now about Katie Ledecky as a young girl? Katie McLaughlin is just a few months junior of her.
She wants to sprint … well who doesn’t. But she is too far from the level where competition is happening nowadays. She is remembered mostly as a seventeen years old girl winning a bronze medal n 200 fly and as a young tough girl who makes 200fly – 4×200 double, losing in the middle of the race almost 2 body length and finishing very strongly leaving nothing to do for Katie Ledecky to complete the golden race.
Moving to sprint events with very tough competition and leaving her 200 legacy won’t serve her good.

Welcome to Chinese championships in the women’s 200 free! America first! Tough on China! 😆
I don’t know what are Katie McLaughlin’s goals for the summer. It’s funny to swim a 400 IM as a warm-up for the 50 free. She works her endurance and her freestyle speed. Let’s see the results in a few weeks. So far her freestyle looks very good. I think that her best chances to make the US team for worlds next year are in the 4X200 free relay and the 100 fly (very open after Kelsi Worrell). I still have concerns about her 200 fly. But that’s a weak event in USA so anything is possible. You can make the team in 2.07.

If that is Chinese championship in 200 free then there is nothing to worry about for other nations. Chinese team still doesn’t have a leader of 1:54 calibre to be a decisive factor in 4×200 relay.
At this meet Li Bingjie is very consistent with her 2018 in-season times in 200, 400 and 1500 events. It makes me to believe that she will be close to 8:28 in 800 today.

This is my first time commenting. I need to ask why does Bobo always get downvoted to the ground every time he posts

Because it’s the ritual.

Are the live results working for anyone? I can’t seem to view anything after the 4IMs.

They have been glitchy all meet. Watch the live stream if u want results in real time