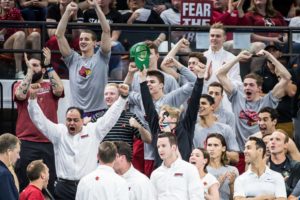 Vanessa Pearl was named the SEC Freshman of the Week, earning her third honor in four weeks, while Kacper Stokowski earned the honor on the men’s side.

Florida’s Kacper Stokowski Out with Illness, Expected to Return

Stokowski, a World Junior Record holder, has missed the past two meets after swimming the season-opener.

Evgeny Rylov is the reigning World Champion in the men’s 200 backstroke.