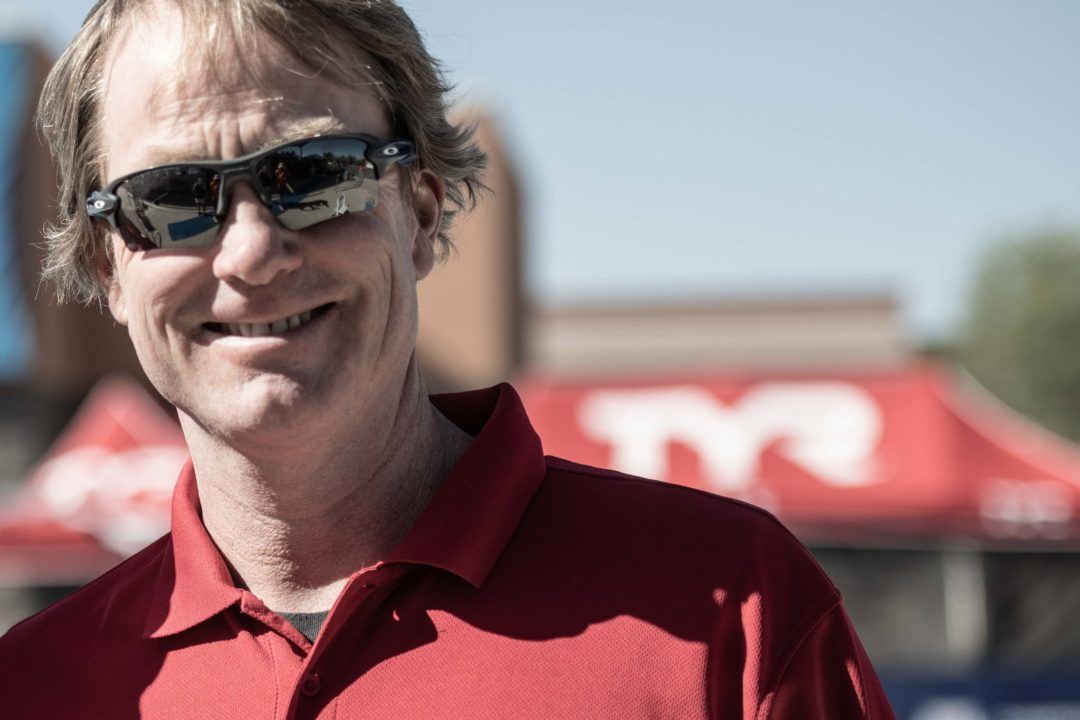 Ray Looze has a good thing going at Indiana, but is the allure of the head coaching job at his alma mater USC enough to pull him away from Bloomington? Archive photo via Mike Lewis/Ola Vista Photography

The University of Minnesota has announced the addition of former student-athlete Stacy Busack an associate head coach for the program.

On Thursday, USC head men’s and women’s swimming coach Dave Salo announced that this would be his last season leading the Trojans in collegiate competition. Last season was one of the busiest Division I offseasons for major coaching changes in recent memory, headlined by openings at Stanford, UNC, Missouri, and Alabama, but there’s always a certain level of anticipation in Olympic off-seasons for aging coaches who might be hanging on to get their swimmers through one last cycle, or view a clean opportunity to step back and focus on a smaller post-grad group rather than continuing the collegiate grind.

The first wheels are already turning on the 2020 offseason carousel, with both Pepperdine and USC already on the market (though Pepperdine does have an interim head coach in place).

USC is already a ‘dream job’ position up for grabs, and will be one of the highlights that will have the usual list of top-class coaches interviewing. Besides its location in Southern California and the lifestyle (and weather, and recruits) and the beautiful, newly-renovated outdoor facility that this job brings, USC is a program that has pedigree. The accolades could fill pages, but 9 NCAA men’s championships and 1 NCAA women’s championship are the highlights. USC is the type of job that culminates a career, and the type of job where you can expect (and be expected to) coach Olympic gold medal contenders.

USC as a department is also undergoing sweeping change after a decade of controversy, most of which isn’t related to swimming. Between admissions scandals (which hit the water polo and soccer programs), the college basketball corruption scandal, the Reggie Bush scandal, and other problems, it has been a tumultuous century so far for the Trojans. Three senior members of the athletics department were fired earlier this week, including former USC varsity swimmer and Swim With Mike fundraiser founder Ron Orr, who had worked with the department for more than 30 years.

So this is a job that every coach in the country should want, but it’s also weirdly positioned in a place of uncertainty for whomever takes the role. That makes it a very interesting job, and maybe one that will see a rising assistant get the nod over an established head coach at another ‘big school’ looking to inch their way up the national coaching ladder. If I were a coach in a stable position at a big-time school, I don’t know that I would leave that for the rocky ground in LA right now.

Below are the first 3 candidates that jumped to our mind for the job. Note that these aren’t based on any information, or even rumors, about who might be interested, it’s just wild speculation at this point, so recruits don’t lose your minds quite yet if you’ve committed to one of these coaches at another school. We’ll let you know when it’s time to start making calls.

(Will this program split? We don’t know. But we could see it happening).

1. Ray Looze, head coach, Indiana – Looze’s name came up in connection with the Stanford men’s position last year, though he ultimately signed a big extension to stay at Indiana. The USC job, however, has one big draw that the Stanford job didn’t: it’s Looze’s alma mater. That’s still a trump card when it comes to ‘dream jobs’ for many coaches. He was both an athletic and academic All-American at USC, had NCAA Championship top 10 finishes on 8 occasions, and finished 2nd in the 400 IM at the 1990 NCAA Championships. He earned a finance degree magna cum laude; and NCAA Postgraduate Scholarship, and was a finalist for both the Walter Byers Award and the Rhodes Scholarship. Needless to say: Looze thrived in Southern California. For most of his 17 years at Indiana, the team had solid results, but over the last 5+ years, Indiana has emerged into the kind of national power that gives Looze all the creds he needs to be considered this job – and what’s more, he’s produced NCAA Champions, record-holders, and top 10 programs on both the men’s and women’s sides of the pool. If USC wants to keep the men’s and women’s programs together,  and see both succeed, Looze would be a strong choice.

Subplot: he knows how to manage a diving and swimming program together, which is something USC seems like it would be interested in, giving its diving history.

2. Catherine Kase, associate head coach, USC – The most obvious candidate is USC’s current associate head coach Catherine Kase. Currently in her 12th season with the program. Kase served as the United States’ head open water coach at the 2016 Olympics and will do so again in 2020. She was also head open water coach for the 2019, 2015, 2013, and 2009 FINA World Championships, as well as the 2014 and 2016 Pan Pacific Championships and 2007 Pan American Games. This shows that she has both the performance and leadership background to carry a program like USC from the top. Even if she didn’t want to leave southern California, we have to believe that she was the most logical candidate for the UCLA job when it opened last year, though she ultimately stayed at USC. Respected by her peers and with a proven track record, this might be the job that Kase has been waiting for (as it’s impossible to believe that she didn’t have Power 5 head coaching offers last summer).

3. Tyler Fenwick, associate head coach, Virginia – Fenwick has strong SoCal roots after working as the men’s national team associate head coach at Mission Viejo early in his career. While there, he coached 2 FINA World Junior Champions, a U.S. Open Water men’s national champion, a U.S. national champion, and a U.S. junior national champion. He’s worked at a high level with two top-10 NCAA programs, at Tennessee and now at Virginia, and has been a part of the Todd-DeSorbo-led resurgence of the Virginia program. That Virginia program was in a similar spot as this USC program is now: great academics, a huge legacy, but a few down years that need some youthful energy to revive. Fenwick has the blueprint of that from Virginia, and all of the high performance accolades to back it up. Plus, his wife Hayley is a Southern California native. With the couple recently welcoming their first child to the world, being closer to home seems like an additional draw.

Mike Bottom looking to get back to California? Kremer from Minnesota? Kipp from NW?

I don’t think Kipp is going to jump from NW that quick, though he does have a USC connection. He’s laid some good recruiting groundwork at Northwestern for the program to be successful in the future, but Northwestern men were 9th and women were 7th at Big Tens last year. Doesn’t feel like the right timing to me.

Bottom is somewhere in the neighborhood of 63-years old. I have a hard time believing USC would bring in a 63-year old coach to take over the program. I would guess that Michigan will be Bottom’s last NCAA coaching job.

Kremer has as good of a chance as anyone, I guess. But no obvious tie… Read more »

Good point, none of the 3 names above are known as sprint coaches.

If we presume Coley’s going to ride out at Alabama for a while, who else is producing good young sprinters right now? Not going to be Troy, not going to be Peter Andrew. I guess Bobby Guntoro from NC State is the name that jumps to mind there who seems like they might leave for this position.

I do think that the younger generation of coaches tend to be more flexible. I think they are less pigeonholed into “I’m a distance coach, I’m a sprint coach, I only coach IMers.”

Good point. A young coach with a great sprint mind would do wonder at USC.

Coley should’ve been hired last year by UCLA. He’s one of the best sprint coaches in the country, and he can recruit fast swimmers. Indiana will not be a Big 10 Champ again so soon, without him. Coley, with his talent, could’ve bring Men’s swimming back to UCLA, and make that team a NCAA title contender – like it used to be…

Well, by the time UCLA opened up, Coley already had a job. I’m not sure UCLA is a better job than Alabama, either.

Also, I’m not sure that ‘coaching talent’ is what determines whether or not schools are going to bring back men’s swimming, though for sure I’d love to see the men return to UCLA.

Branden,
“Good point, none of the 3 names above are distance coaches.”

While Ray runs one of the most versatile programs around with stars from sprints to distance and in every stroke, Case (Vogt) and Fenwick have far more production/excellent results not just as distance coaches but in OPEN WATER than in the pool. They’ve been associated with well rounded programs but their primary personal coaching reputations have been made in the aerobic realm.

Kelly was the co-head coach with Bill Rose at Mission Viejo for years, so he does have some SoCal ties.

This is not true. Coach Rose never had a Co-Head Coach. Kelly was an assistant.

Kremer coaches Mission Viejo before assistant at Minnesota. Not sure he has enough of a top 10 ncaa performances to have the pedigree….or American Olympians!

Kelly is a phenomenal coach. He’d be a strong candidate if he was interested. His teams are always ready to race in March.

I think your list is strong, so I threw out some outside the box names. Yes I know Bottom is older and would be a long shot, but he’s an amazing ceo that could bring in some great assistants to run the daily groups, recruiting, and dryland. Another direction to go is to continue the run on NCST assistants and try to get Bobby to come out west?

Well that last one aged well

Team didn’t do great last couple of years. Kase was part of that and will have to go imo. Got the impression she can’t devote enough time to be a head coach