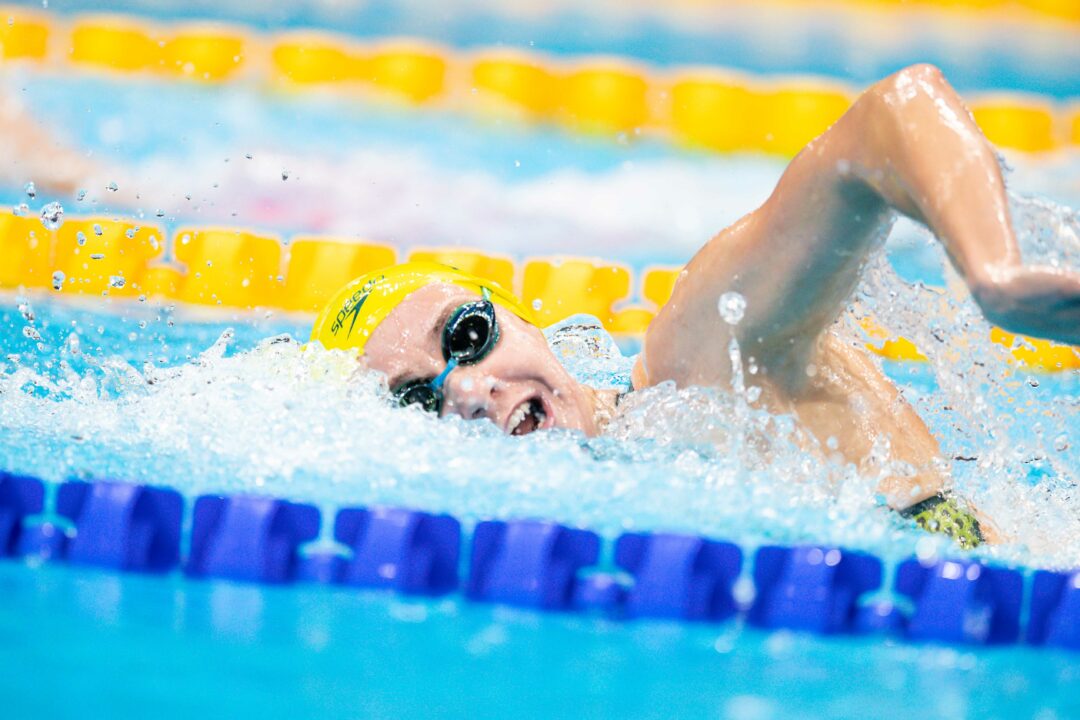 The majority of readers are most compelled by the brewing matchup in the women's 400 freestyle between Ariarne Titmus and Summer McIntosh. Archive photo via Jack Spitser/Spitser Photography

Our most recent poll asked SwimSwam readers which matchup was most intriguing to them (on the women’s side) at the Commonwealth Games:

Question: Which women’s Commonwealth clash are you most excited for in Birmingham?

While it would be regarded by most as the option with the most clear-cut winner, the majority of readers are most compelled by the brewing matchup in the women’s 400 freestyle between Ariarne Titmus and Summer McIntosh.

With nearly 45 percent of votes, the event comes out on top by a wide margin.

While Titmus is the newly-minted world record holder and reigning Olympic champion, McIntosh’s constant improvement is certainly intriguing, and the 15-year-old showed she’s not afraid to go head-to-head with the best, giving Katie Ledecky a decent run at the World Championships in June.

McIntosh placed fourth at the Olympics last summer in 4:02.42, with Titmus earning gold in 3:56.69. Although Titmus has since lowered the world record down to 3:56.40, McIntosh has improved by three seconds (3:59.39) and has cut her deficit to Titmus in half in a 12-month span.

While that’s still a wide gap to overcome, the poll results suggest it’s still a matchup everyone is looking forward to. It should also be noted that McIntosh has scratched out of the 200 fly at the Games, which is scheduled for the day before the 400 free.

Unfortunately, the event that placed second in the poll, the 400 IM, won’t have the McIntosh vs Kaylee McKeown matchup after the Australian dropped it from her lineup a few days ago. The race now looks to be a clear win for McIntosh after she qualified first for the final by nearly five seconds in this morning’s prelims in 4:36.72.

The two swimmers will race in the 200 IM later on, although McKeown has a best time over two seconds clear of McIntosh there.

In addition to O’Callaghan being the current world champ, Jack was seeded second coming into Worlds but broke her hand in warmup in Budapest and was forced to withdraw. McKeon is the reigning Olympic champion but did not race in Budapest, so this three-way battle is one to circle on the calendar.

Another three-way battle is brewing in the 100 back, with McKeown, O’Callaghan and Canadian Kylie Masse, who is the defending champion.

McKeown will be looking to do something significant in this event after dropping it at the World Championships, and O’Callaghan did the same thing (pre-meet) after cracking 59 at Aussie Trials. Masse is coming off winning the world title in the 50 back and was the silver medalist in Budapest in this event, and owns a season-best (58.39) just shy of McKeown (58.31).

Rounding things out is the 100 fly, where defending champion Emma McKeon will battle Olympic champion Maggie MacNeil. Neither raced this at Worlds, where MacNeil only did relays. If both are at their best, it should be very close.

Below, vote in our new A3 Performance Poll, which asks: Are you in favor of the new, extended Olympic swimming schedule for Paris?

The poll question is vague. Am I happy that the schedule has expanded to 9 days? Yes. Do I like the new schedule? No.

Not sure how they made their decisions but the new schedule is somehow worse than the old one despite having an extra day.

I may end up looking like a complete fool in a few days, but am I the only person that doesn’t think it will be much of a ‘duel’ between McIntosh and Titmus in the 4free? Titmus is a full THREE seconds faster than McIntosh, and that performance was very recent. Or is it purely the fact that they have never matched up head to head in that event, wheras we’ve seen the other duels on the list many times?

I don’t think it will be much of a battle – but specifically because I think Canada peaked for Worlds and Australia is peaking for Commonwealth Games. I think Summer will be somewhere around 4:00.

But I think over the next two years, it will be a fun battle.

Our duel in the pool version?