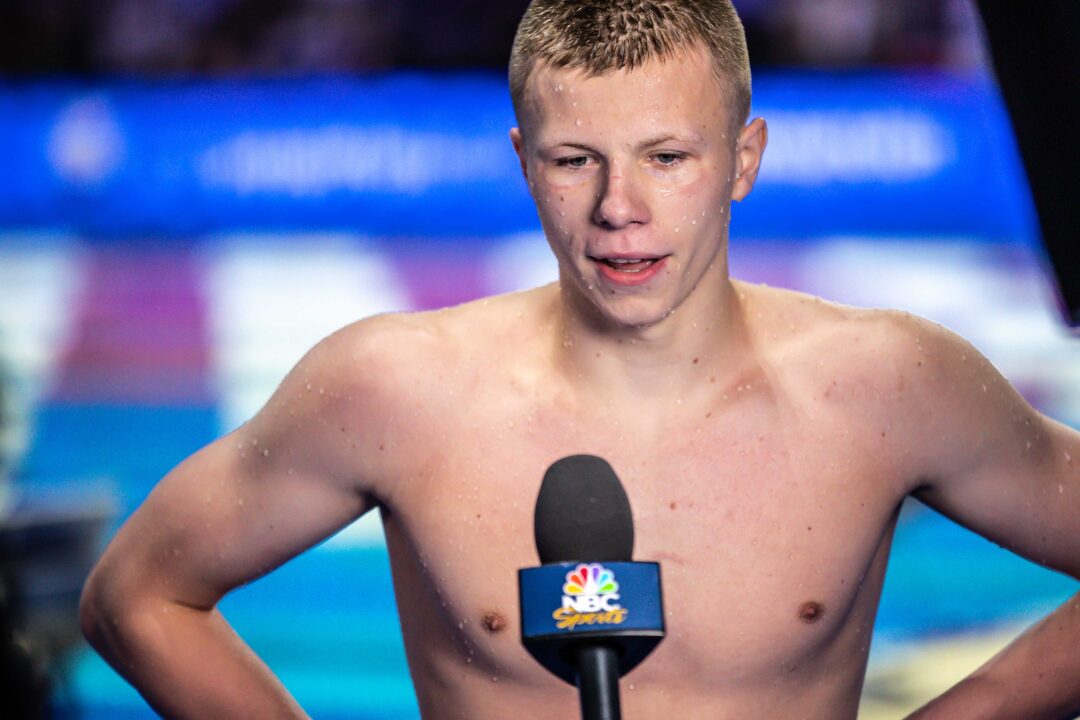 Ponsler was second in the event at Wave I Trials last summer in a 4:22.23 which allowed him to swim the event again at Wave II. Archive photo via Jack Spitser/Spitser Photography

Highlighting night 2 of NCSAs was NC State commit for fall 2022 Kyle Ponsler. Ponsler swims for Fishers Area Swim Team and won the men’s 400 IM in a best time of 4:18.44. Notably, Ponsler was the only swimmer under the 4:20 mark. That was a huge best time for Ponsler as his previous best stood at a 4:22.23 which he swam to finish second at Wave I Olympic Trials last summer.

Among the other highlight finishes in that meet was a 4:21.00 from Landon D’Ariano of Germantown Academy, which ranks him as the 11th-best 15-16 in the history of the event.

Also highlighting the night was Nation’s Capital Camille Spink. The Tennessee commit for 2023 won the women’s 200 free in a 1:59.87 making her the only girl under the 2:00 mark. Spink has been under the 2:00 before as her best time stands at a 1:59.58 from last summer’s Futures meet in Richmond.

Spink also helped Nation’s Capital to a win in the women’s 200 free relay. The team of Aris Runnels, Spink, Maren Conze, and Julia Simpson swam a final time of 1:44.52. Spink had the fastest split with a 25.00 rolling start on the second leg.

In what was the closest race of the night, Catherine Hughes of Arlington Aquatic Club won the women’s 100 breast in a 1:11.40 to finish just ahead of Campbell Chase of Cor Swimming who touched in a 1:11.62. Both ladies swam best times by over two seconds.

Coming away with the win in the men’s 100 breast was Will Scholtz of Lakeside Swim Team. Scholtz swam a 1:02.62 in his win which was faster than his previous best of 1:02.68. Scholtz is committed to Texas for 2023.

In the men’s 100 back, JT Ewing of Arlington Aquatic Club earned the win swimming a 55.41. That was a best time for the 2022 NC State commit as his previous best stood at a 56.10 which he swam representing the US at the Mel Zajac Jr. Invite in June of this year.

Winning the men’s 800 free relay was Cor Swimming. The team of William Savarese, Giovanni Linscheer, Ethan Gluck, and Levi Sandidge combined for a final time of 7:33.28, winning the event by over five seconds. Notably, Linscheer had the fasest split as he swam a 1:51.18. Linscheer is committed to Florida for 2022 and won the men’s 800 free on night 1.

Awesome swim Kyle Ponsler! Congrats on breaking the 4:20 barrier in the 400 IM!!

Ponsler got that DAWG in him😈