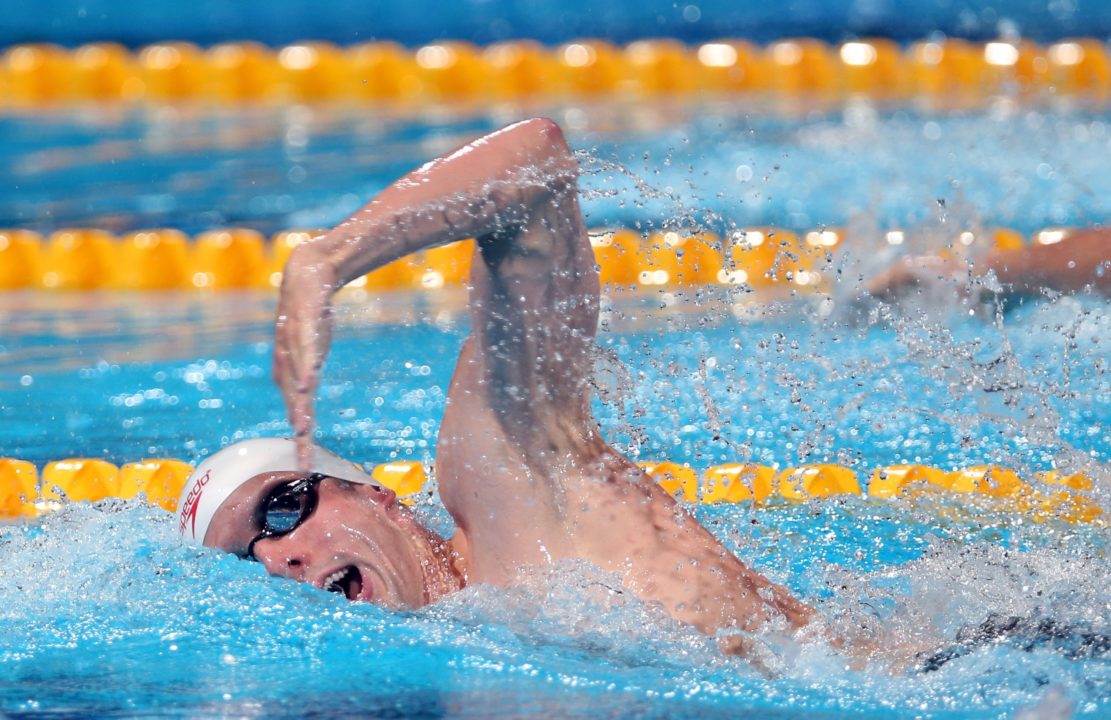 Swimming Canada released the psych sheet for the 2015 Canadian Swimming Trials which will be the selection meet for the Canadian World Championship team, Pan Am team, and World University Games team. Archive photo via Swimming Canada/Ian MacNicol

Swimming Canada released the psych sheet for the 2015 Canadian Swimming Trials which will be the selection meet for the Canadian World Championship team, Pan Am team, and World University Games team.

Among some of the top Canadian talent fighting for a spot on a national team, many members of the Michigan team will be crossing north of the border to compete in Toronto. There are a total of 197 entries from foreign (non-Canadian) athletes including the likes of Michael Wynalda, Geoff Cheah, and Bruno Ortiz.

Some stellar match-ups are set to be made. In the 50m fly, recent NCAA Champion with Cal Noemie Thomas leads the charge ahead of Katerine Savard and Sandrine Mainville. Sam Corea, who also medalled at NCAAs in Greensboro is seeded fourth behind Mainville.

Savard and Thomas will face off again in the 100 with the addition of Audrey Lacroix. Both Lacroix and Savard are Commonwealth Games gold medallists, and Thomas is a world championship finalists in the event. The three all have potential to make it. The three will also fight for a spot on the team in the 200 fly where Lacroix is seeded first, Savard second, and Thomas third.

The men’s 200m fly will be dominated by American swimmers. Kyle Whitaker and Dylan Bosch are the top two seeds in the event by a long shot. The fastest Canadians seed is Zack Chetrat who’s entering the meet with a 1:59.00.

Georgia swimmer Brittany MacLean is seeded first in the 200, 400, and 800 freestyles, but will opt out of the 1500. She swam a similar schedule at NCAAs the past weekend. She’ll have Samantha Cheverton as her biggest competition in the 200. In the middle-distance and distance swims she’ll be up against UBC’s Savannah King, Tabitha Baumann, and Cheverton.

The women’s backstroke events are very tightly packed. Brookylnn Snodgrass of Indiana has the top seed in the 100 followed by Dominique Bouchard (Missouri), and Hilary Caldwell. Rising age-group star Taylor Ruck will be swimming the 100 back as well, going in as the fourth seed ahead of Danielle Hanus and Kennedy Goss.

The 200 will feature a very similar field but with Caldwell leading the pack. Bouchard, Genevieve Cantin, Snodgrass, and Ruck follow in her steps. This will be Ruck’s first chance at qualifying for a senior international meet for Canada. Ruck trains in Arizona with the Scottsdale team, and has lived there the majority of her life, however does not have American citizenship and plans to represent Canada internationally given the opportunity.

The breaststroke events will also feature some very solid international talent with the likes of Breeja Larson. Larson will be swimming the 100 and 200 breaststrokes entering Kierra Smith’s domain. Smith is coming off an NCAA Championship title in the 200 yard breaststroke and is one of the favourites to make the national team. Throw in Martha McCabe who won a bronze in the 200 breaststroke at worlds in 2011, and it’s going to be one of the best races. Tera Van Beilen of UBC and Ashley McGregor of Texas A&M will also be ones to watch. Fiona Doyle who killed it at the CIS Championships will also be a serious contender who could spice things up.

Canadian freestyle star Ryan Cochrane is entered in the 200, 400, and 1500 freestyles. He’s the favorite in the 400 and 1500, and will have to battle some of the young up-and-coming Canadians if he wants to win the 200. He’s done it in the past, so anything is fair game. He is also one of the only Canadian men who’s projected to make the worlds team based on the new trials standards.

Richard Funk, who trains with Michigan, is the top seed in the 200 breaststroke. Missouri’s Igor Koslovskij who is not Canadian is seeded second ahead of Eli Wall. Wall swept the breaststrokes at the 2015 CIS Championships. Sam Tierney of Missouri will also be making the trek to Canada to swim at the new Pan Am facility. Funk will be seeded first in the 100 breast as well ahead of Zach Hayden and Eduardo Solaeche-Gomez.

This is ridiculous! Why are U.S. swimmers and professionals allowed to swim in our
National team qualifying events .I don’t see Canadians swimming in their trials. Our swimmers are fully tapered and shaven and ready to go. Some of the younger swimmers with talent will be denied second swims to Americans 5-10 years older. Swim Canada is concerned that many of our talented swimmers are leaving to swim in the U.S. It is because they give all their time and energy to the top 3 swimmers and give nothing to the university swimmers and talented age group swimmers. The people who run Swim Canada are flat out inept.

Concerned – I believe that all foreign swimmers are not allowed to qualify for ‘A’ finals. Foreign athletes compete in other countries nationals all the time, just when selection is on the line, they aren’t entitled to a championship final.

Foreign swimmers cannot, in fact, swim at major selection meets in the US. Not even as prelim only swimmers. That’s what the US Open is for, anyone can swim at those. (I have no idea about other countries, but US championships are probably most relevant to Canadian swimmers.)

Mitch- I am aware that foreign swimmers are not allowed to qualify for “A” finals. My point is that this is the biggest meet of the year for Canadians and there is only 16 spots open for finals. Our swimmers have been training for months. How many events will a swimmer be fully tapered and shaven? Not very many. Our 17 and 18 year olds could use the experience of top notch events .Some of our swimmers will watch from the stands because Breeja Larson and a few others want to get some long course prep in. At our tax expense. Why not allow some of our Canadians to swim in their major championships to get some yards experience? Especially… Read more »

You don’t need a finals swim to swim fast. So many talented swimmers go all-out in prelims perhaps due to the fact that they’re not close to finals. There are hundreds of entries in many of these types of meets, but that doesn’t mean that places 50-100 won’t try because it’s prelims. Just because you don’t have a shot of finaling doesn’t mean you shouldn’t put everything on the line. This should only affect Canadians that are in range of making B finals and might not because of the American swimmers.

Mitch- a second point. Sure foreign swimmers participate in national trials all the time. smaller federations like Denmark, Ireland and a few scattered swimmers from other countries. But this trial is different. Entire teams from the States are participating. We are talking dozens here. The Toronto International? Sure! The Mel Zajak? Sure. Olympic and World Trials? No way.