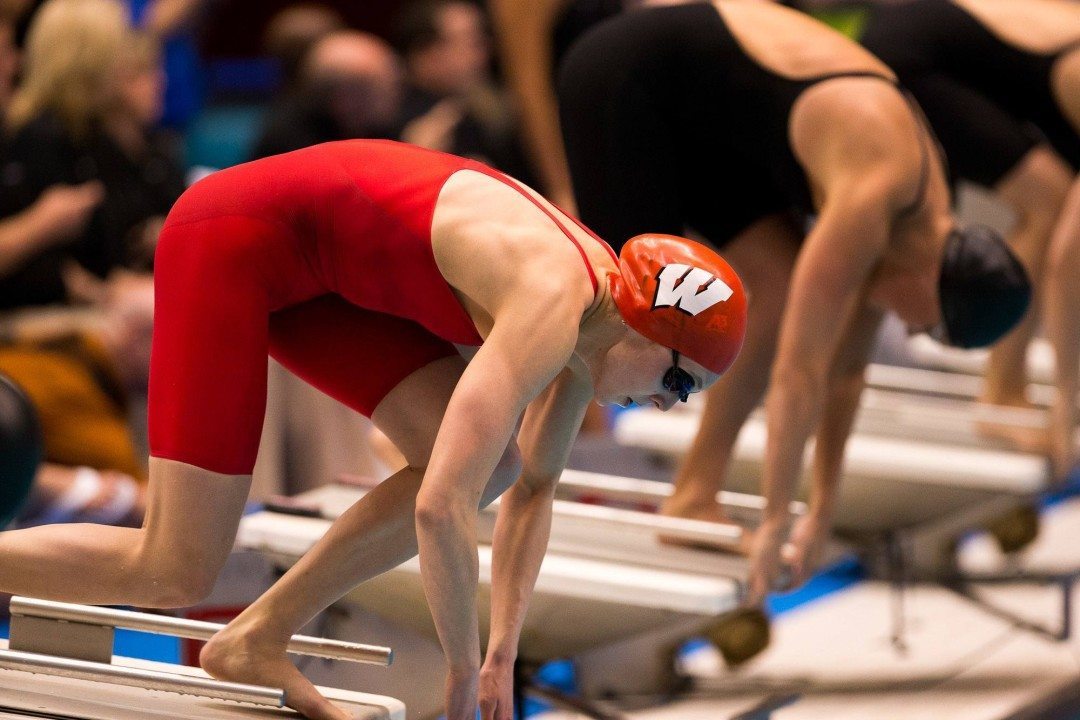 2015 NCAA 50 free runner-up Ivy Martin has been named the University of Wisconsin's female athlete of the year. Archive photo via Tim Binning/TheSwimPictures.com

A consensus national player of the year, Kaminsky won the Wooden Award, Naismith Trophy, Oscar Robertson Trophy and Kareem Abdul-Jabbar Award. A consensus first-team All-American, Kaminsky became just the third Big Ten Player of the Year in UW history and helped lead the Badgers back to the Final Four and the national championship game.

A 16-time All-American and 13-time Big Ten champion, Martin capped off her illustrious swimming career at Wisconsin with a Big Ten championships for the ages. The Madison native won all seven of the events she competed in, setting a Big Ten record for most titles won by an individual at a conference meet.

It’s hard to describe the career of Martin and feel that you’ve fully done justice to all that the Wisconsin standout accomplished. Her senior campaign cemented her as one of the greatest to represent the Motion W on their swim cap.

Nowhere was that more evident than at this year’s Big Ten championships. Martin dove into the pool seven times and came out a champion all seven times, setting a Big Ten record by claiming seven titles at the conference meet. Martin was named Big Ten Swimmer of the Championships for the second-straight season.

Making her case as one of the fastest – if not the fastest – female swimmers in the nation, Martin won the 50 freestyle every time she swam in the event this season until finishing runner-up at the 2015 NCAA Championships.

A 16-time All-American over her career, Martin posted four top-six finishes at this season’s NCAA championships. She was runner-up in the 50 freestyle, placed fourth in both the 100 freestyle and 200 freestyle relay, and contributed to a sixth-place finish in the 400 freestyle relay.

A Madison native, Martin was born to be a Badger. Martin was named Big Ten Swimmer of the Week on five separate occasions this season, bringing her career total to 10 weekly league honors.

One of UW’s leaders both in the pool and on campus, Martin served as team captain during her senior campaign and was a three-time Academic All-Big Ten honoree.

Kaminsky entered the 2014-15 season with some of the greatest expectations in school history. Somehow, the 7-footer embraced them on his broad wingspan and exceeded them, becoming a consensus national player of the year and leading the Badgers in one of the greatest seasons in program history.

Simply put, Frank “The Tank” Kaminsky did it all for Wisconsin and drove the Badgers back to the Final Four and one step further in 2015, reaching the national championship game. Kaminsky was the only player in NCAA Division I to average at least 17.0 points, 8.0 rebounds, 2.0 assists and 1.5 blocks per game. The senior from Lisle, Illinois, led UW in nearly every major category: points, rebounds, assists, blocks, field goal percentage, 3-point field goal percentage, free throws and free throw attempts.

Kaminsky’s stellar senior campaign fueled the Badgers to both the Big Ten regular season and tournament championships, as well as the program’s first-ever No. 1 seed in the NCAA tournament.

A soft-shooting big man with quickness around the basket, Kaminsky had a knack for elevating his play at the biggest moments. During the 2015 NCAA Tournament, Kaminsky scored 29 points in UW’s win over Arizona, which clinched a return trip to the Final Four. He followed that with double-doubles against Kentucky in the national semifinal (20 points, 11 rebounds) and Duke in the national championship (21 points, 12 rebounds).

One of the most versatile big men in college basketball, Kaminsky became just the second player in Wisconsin history to post 1,000 points, 500 rebounds and 100 blocks. Holding the UW single-game record for points in a game (43) from his junior season, Kaminsky also became UW’s career blocks leader with 153 rejections.

Female Athlete of the Year Nominees:

Male Athlete of the Year Nominees: