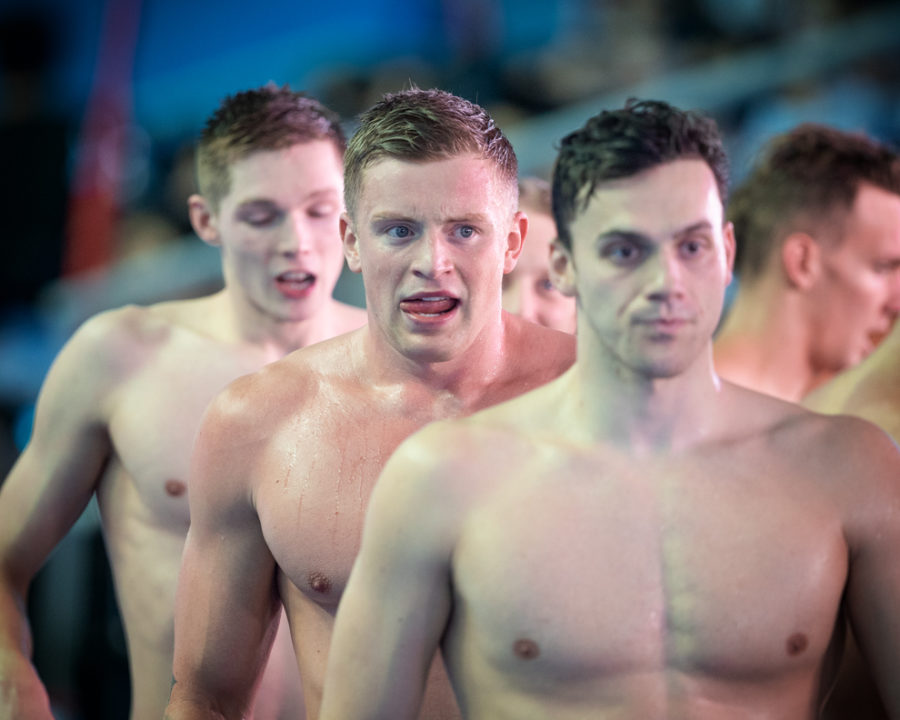 “Many will fail to understand how pubs, restaurants, cinemas, museums & hair salons have been given the go-ahead to open on the 4 July but not swimming pools. Archive photo via “Rafael/Domeyko Photography”

Heat sheets for the final day of the 2021 ACC Men’s Championships reveal a few interesting choices for the top teams as they vie for the title.

Most swimmers within the nation of England have yet to be able to return to indoor swimming, as coronavirus pandemic-related restrictions are preventing leisure centers from reopening at this time.

It was originally believed that England’s pools would fall into the next phase of economic reopening on July 4th; however, Prime Minister Boris Johnson did not include aquatic facilities in his list of businesses able to reopen. The go-ahead was given to pubs, restaurants, hair salons, cinemas and museums.

In response to this decision, Swim England CEO Jane Nickerson said today, June 23rd, “By ignoring the swimming sector in the latest easing of lockdown, the Government has let down millions who rely on being in the water – from those who use pools for mental or physical health reasons to our recreational swimmers and competitive club athletes.”

Additional sentiments posted on the Swim England site by Nickerson include, “Thousands of workers in the sector and facilities across the country are also still in a state of limbo and this is simply unacceptable.

“Many will fail to understand how pubs, restaurants, cinemas, museums and hair salons have been given the go-ahead to open on the 4 July but not chlorine-filled swimming pools.

“I share their frustrations and demand that the Government hastily reconsiders this decision to ignore what is a lifeline to so many.

“It appears that it is okay to sit on the couch watching professional sport, go out for a high calorie meal and then go to the pub but you can’t go for a swim, which provides a sanitised environment.

“Our detailed Returning to the Pool guidance has shown that pools can operate a controlled Covid-19 safe way.

“However, we have been stressing to the Government that facilities need at least two weeks to be able to prepare for reopening so it’s deeply frustrating these pleas haven’t been listened to.

“Being in the water can be incredibly fun for people of all ages but it’s so important that youngsters have learned the necessary skills to ensure they are safe in and around water and know what to do in an emergency.

“While pools remain shut, this simply doesn’t happen and we can’t afford the next generation to miss out on this vital life skill.

“The longer facilities remain closed, the increased chance many of them won’t be able to afford to reopen.

“We have already called for the Government to provide urgent financial support to the sector otherwise we risk losing hundreds of pools which will deprive millions of people of the ability to enjoy all the benefits of being active in the water.

“It’s time the Government did the right thing for the leisure industry and the health of the nation by reopening pools and we’re keen to work closely with them to ensure this happens sooner rather than later.

“If pools cannot open from the 4 July, the Government is jeopardising the physical and mental wellbeing of millions of people, preventing a generation of children from learning to swim and enabling them to have fun in, on and around water – as well as halting the future of potential Olympic champions.”

We’ve reported how a select group of upper-tier athletes, 32 according to British Swimming, have been provided permission to access National Training Centres of Loughborough and Bath. However, that means thousands of swimmers from age groupers to the elite are being left high and dry.

In response, Swim England has officially launched an #OpenOurPools campaign. The organization is calling on its members, clubs, coaches, teachers, swim schools, swimmers and facility operators to plead with the nation’s government to allow pools to reopen on July 4th.

The aforementioned stakeholders are encouraged to sign a petition, write their members of Parliament and make a pledge on social media.

British Swimming CEO Jack Bruckner is among those influential voices taking on the pledge. “So disappointing!” he says of the lack of pool opening in the government’s latest announcement. “What a dreadful announcement!”

“There has been so much hard work from colleagues and patterns to get pools ready to open – we are ready.”

Commonwealth Games champion James Wilby also voiced his concern over the decision. “This is crazy. Places of arguably greater risk opening before swimming pools and gyms! Physical fitness and mental wellbeing can be done safely in pools with Swim England working hard to provide support so that venues are ready to go.

This is crazy… Places of arguably greater risk opening before swimming pools and gyms! Physical fitness and mental wellbeing can be done safely in pools with @Swim_England working hard to provide support so that venues are ready to go. #OpenOurPools https://t.co/DYCURG3L50

So disappointing ! What a dreadful announcement. There has been so much hard work from colleagues and partners to get pools ready to open – we are ready @Swim_England @adam_peaty @JMNSwimmer @Andyjamesonswim @britishswimming @BorisJohnson #OpenOurPools

Yet another mess up from a ridiculous and awful government.

Yeah similar situation in belgium. they opened up gyms, cafes, restaurants etc but didn’t even consider reopening swimming pools. Unbelievable because swimming is pretty safe. Uk and Belgium were 2 of the only countries not to re-open their swimming pools on June 15th.
https://twitter.com/PJVangerven/status/1271376590639947776?s=19

I was hopeful to get good news today, but we are in a culture that values alcoholism above sport so really should not have expected anything. We can rebuild the economy one pint at a time, forgot about the mental and physical health of 1000’s of young people.