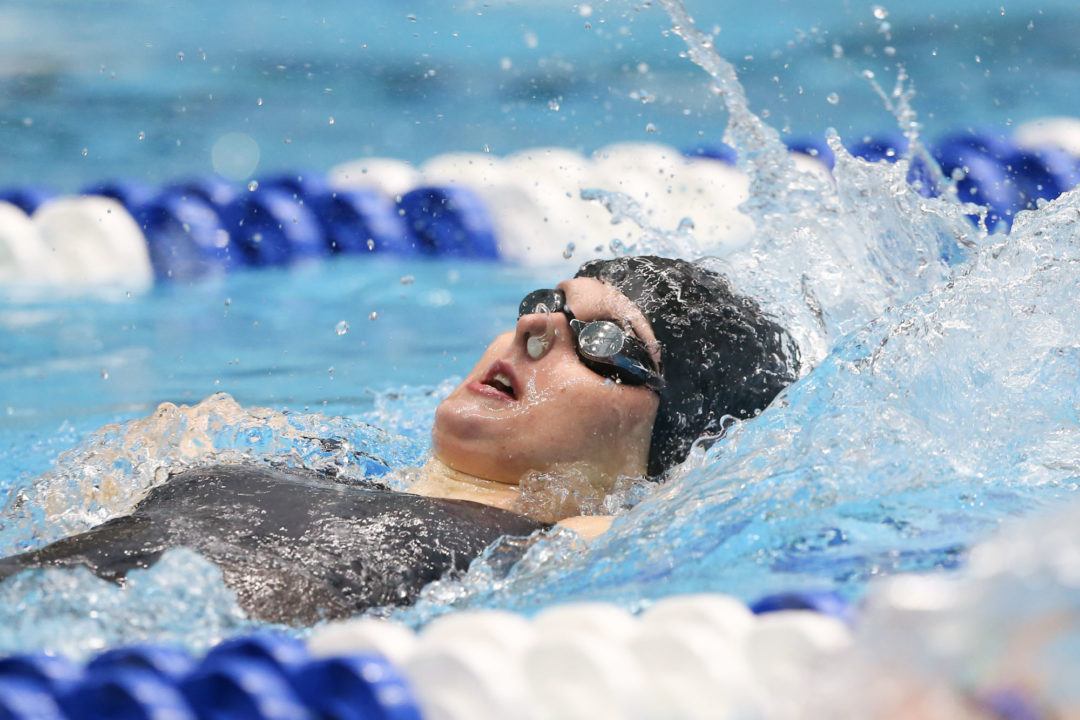 Stanford had several first-time individual champions at this meet. In fact, every single swimming champion for the Cardinal had never won individually before. Archive photo via Tim Binning/TheSwimPictures.com

The Stanford Cardinal was dominant again as they won the 2020 women’s Pac-12 Championships, extending their streak to 4-straight titles. It was the program’s 22nd title in history. Their longest streak stands at 13 in a row, as they won from 1987 to 1999. They own more Pac-12 titles than any other program. Cal and Arizona are tied for the 2nd most with just 4 championship titles each.

Stanford will next turn their attention to the NCAA Championships in Athens. They’re the 3-time defending champions there as well. They have 11 total NCAA Championships titles, more than any other NCAA division 1 program. Georgia and Auburn are tied with the 2nd most with 7 titles each.

Stanford had several first-time individual champions at this meet. In fact, every single swimming champion for the Cardinal had never won an individual event before 2020. Erin Voss, a senior, won her first title in her last Pac-12 race with her performance in the 200 back. She was named the 2020 Pac-12 Scholar Athlete of the Year.

Brooke Forde, the reigning NCAA 500 free champion, didn’t medal in that event but then went on to win her first titles in the 400 IM and 200 breast. Allie Raab (100 breast) and Morgan Tankersley (1650 free) also won their first golds. Aside from the those titles, their only relay win came in the 200 medley relay.

The only repeat champion for the Cardinal was a diver. Mia Paulsen repeated as the platform champion on the final night. Teammate Carolina Sculti was the 3-meter champion. That was Sculti’s first-ever title.

This was a different look than the Stanford team of recent years, which included the likes of stars Simone Manuel, Katie Ledecky, and Ella Eastin. Their depth really stood out this season. Below is a quote Stanford Head Coach Greg Meehan‘s interview on the team’s win when asked how it felt to get the job done without a big star.

“It definitely had a little different feel than it’s had the last 3, 4, 5 years. At the same time, our job is still the same and that’s to come to this meet and be the best version of ourselves to compete for a Pac-12 title and ultimately kind of take that next step in the season and get ourselves ready for the NCAA Championships.”

Does anyone know if there are live results from the prelims of the Pac-12 last chance meet today? Or will the results just be listed online afterwards? Thanks.

Ali Harrison 59.85. You can find it in meet mobile under pac 12 short course

I’ll have that meet covered after finals, but meet mobile has live results 🙂

ASU —- Common —- how long has Bob been there and UCLA beat them. Whoa.

They did that without having any divers. The other teams had divers constantly in finals

He’s always going to have trouble recruiting against the California pac12 schools. If a parent is paying any part of their kids college they are not going to have ASU very high on the list.

ASU had a good meet from what I saw🤷‍♀️

Take out diving scores and ASU is 3rd in swimming only points. Not bad for a team that was a basement dweller for years before Bowman’s arrival.

That means they had more swimmers than everyone else too😂

Overrated: Yes, ASU had more swimmers in the A Finals than UCLA. Plus, ASU had 6 podium finishes while UCLA had none!

It helps to fact check the Meet Mobile.

Terrific finish for the Women of Troy…well done.

Congratulations on a job well done! Swimulator was so far off…

Just to clarify, Swimulator doesn’t predict the meet outcome. It just adds up scores based on swimmers’ best times of the season. There’s no way to know who will drop, who will add, and it can’t account for diving or, say, a jammed arm on the finish of a 50 free.

One good example is UCLA. They HEAVILY outperformed their seed and got 4th. But when swimulator calculated their score based on their rankings before the meet, they were only a distant 6th. We can always try our hand at predictions based on how the season has gone so far, but there’s no way to know for sure which teams will just blow away expectations.

I think having swimulator prediction is good. You are absolutely right we won’t know how well the swimmers will perform or what would happen, i.e. Abbey’s unfortunate injury. SC was so close to take 2nd, but without Abbey’s injury, Cal would have won more individual and relay events.

Looked like they had a good meet. just one thing to work on and that is relays. It’s a big step but to improve their status nationally they need to qualify their relays for NCAAs.

I did the fan guides awhile back, before their last dual meet or two. That could be why. Those times hadn’t been swum yet.