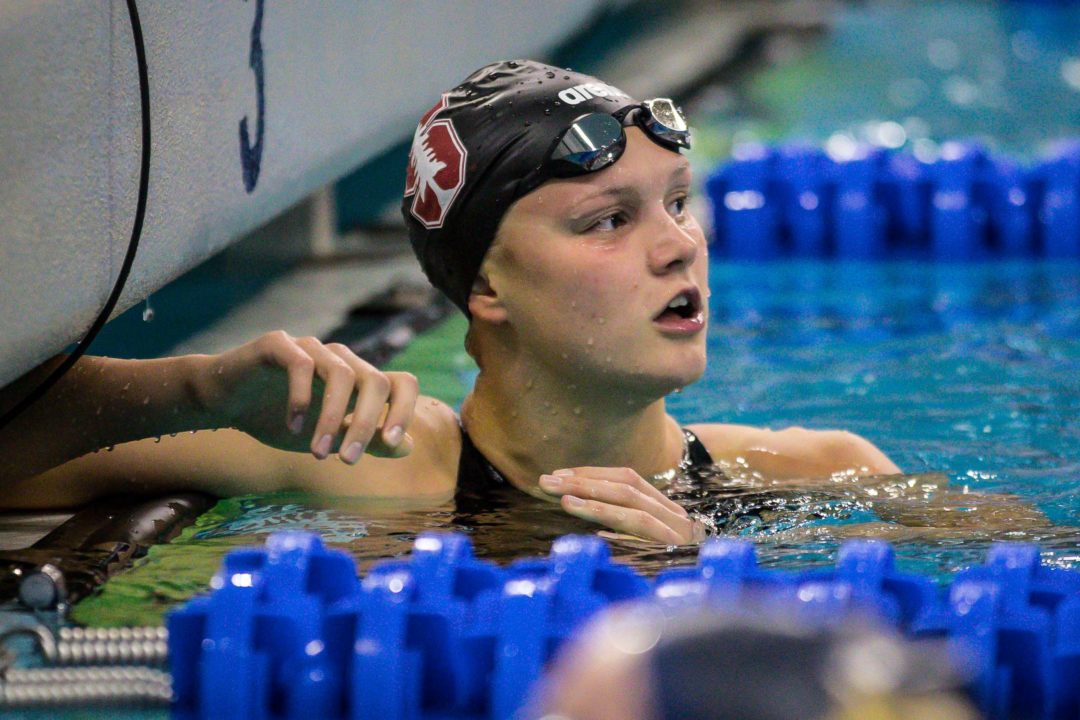 The reigning NCAA Champion women will race against the reigning NCAA runners-up as powerhouses Stanford and Cal battle for the 2020 Pac-12 title. Archive photo via Jack Spitser/Spitser Photography

After declaring a false start in the 200 free, where she was the 2019 champion, Weitzeil was seen on deck wearing a sling during finals.

Stanford’s Allie Raab will look to sweep the breaststroke events after taking the 100 breast title last night. Teammate Zoe Bartel, however, is the top seed.

The 2020 Pac-12 Championships are set to begin on February 27th in Federal Way, Washington. The reigning NCAA Champion Stanford women are the favorites in the title conversation, with depth all-around and several returning stars. NCAA runner-up Cal will challenge, as the Bears are also loaded with talent. It looks like a 2-team contest for the win, but the battle for 3rd could heat up between USC and ASU, while Arizona and UCLA may be battling for a top-5 finish.

UCLA – Claire Grover (sophomore sprint/breaststroker), Kenisha Liu (senior sprinter), Amy Okada (senior butterflier), Sophia Kosturos (freshman sprint/backstroker) — The Bruins graduated their top divers in 2019 who scored a good chunk of their points, but Grover brings back a ton of points after making the championship finals as a freshman and is a major threat to repeat as a medalist in the 100 breast. Kosturos is one of their key additions and could play a role on their sprint relays.

200 FREE: Sprint star Abbey Weitzeil of Cal is the defending champion here, and with the way she’s swimming this season, it would be no shock to see her repeat as champion. She currently leads the Pac-12. Teammate Robin Neumann is the defending bronze medalist. Additional returning finalists include Lauren Pitzer (STAN), Morgan Tankersley (STAN), Katie Drabot (STAN), Izzy Ivey (CAL), and Cierra Runge (ASU). This is a big scoring event for the Cardinal. USC’s Laticia Transom is ranked 2nd in the conference this season and returns after winning the 2019 B final.

100 BREAST: ASU’s reigning champ Silja Kansakoski has multiple Pac-12 titles in this event, but Cal’s 2019 B final winner Ema Rajic leads the Pac-12 this season in a time that would’ve taken a close 2nd last season. Kansakosi and Arizona’s Mallory Korenwinder are the only other women to have broken 1:00 this season, but we could see a tight battle in the 58-high to 59-low range for the medals. UCLA’s Claire Grover returns after narrowly missing the podium last season. Stanford has several women seeking a return to the final with Zoe Bartel, Allie Raab, and Grace Zhao.

200 BACK: With the top 2 finishers in 2019 not around this season, Stanford’s Lucie Nordmann, the reigning bronze medalist, is the top returner. Teammate Erin Voss is the Pac-12 leader this season, with Cardinal freshman Alexandra Crisera ranked behind her. Stanford has a lot of medal potential here, but Cal’s Keaton Blovad is a title threat for the Bears.

500 FREE: If reigning NCAA Champion Brooke Forde of Stanford chooses to swim this event at Pac-12s this season (she opted not to last year), she’s the favorite. However, 2019 runner-up Lauren Pitzer and teammate Katie Drabot may also be in the mix. Drabot may also opt out of this one. Both Drabot and Forde opted for the 200 IM instead in 2019, but they’re currently 1-2 respectively in the Pac-12. Stanford is once again loaded with title contenders, as they also have returning finalist Morgan Tankersley. Cierra Runge was a Pac-12 Champion in this event as a freshman for Cal in 2015. She placed 3rd last season for ASU, and will look to return to the top. Teammate Emma Nordin has been swimming very well this season and joins the medal conversation. Arizona All-Americans Kirsten Jacobsen, the 2018 NCAA 3rd place finisher, and Hannah Cox are also a threat.

While this could be a good meet between Stanford and Cal, diving is likely to sway things further in Stanford’s favor. They return a huge amount of points between Lenz, Paulsen, and Sculti. Things could be tight between ASU and USC for 3rd, but we’re prediction USC will come out on top there thanks to their sprint depth and relay potential. Arizona and UCLA will likely battle for that last spot in the top 5, with the Wildcats relying largely on their distance depth.

The fact that Cierra Runge is still swimming… that’s crazy

Is anyone gonna mention the fact that Utah beat UofA and smothered Washington state this year?

How do you figure that WSU is going to beat Utah? Historically Utah is a much better program and consistently has more scoring swimmers.

How come none of the Divers are mentioned as Stars. Do you include Diving in your projections?

There are a few divers listed as stars… And I’ve mentioned some of the ones who graduated that will impact the scoring. In the projections section, I’ve talked about how diving plays a role. Especially between Cal and Stanford.

Swimulator projections – Southern Cal usually refers to USC, and U of Californial – Berkeley is usually Cal.
I believe that Cal s/b #2 in the swimualtor projections :>)
So many California schools in the Pac-12

When I click on the psych sheets it shows last years-
Can you please fix?

Sorry about that. I’ll remove the link and post the new one as soon as I find it.