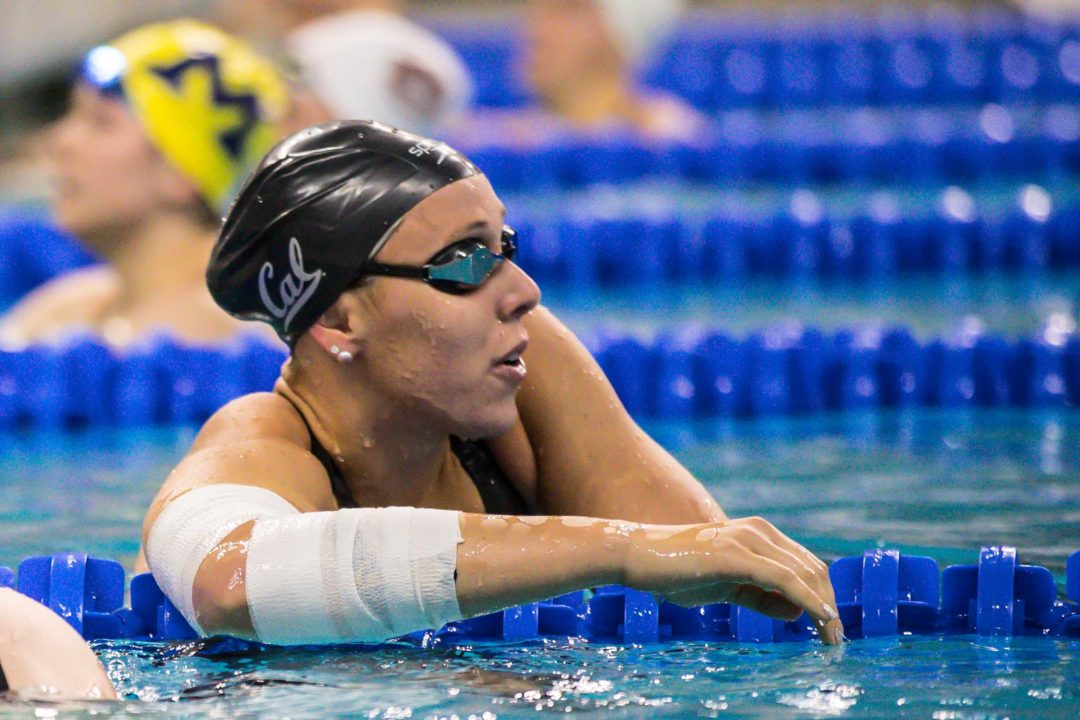 After declaring a false start in the 200 free, where she was the 2019 champion, Weitzeil was seen on deck wearing a sling during finals. Archive photo via Jack Spitser/Spitser Photography

Cal’s Abbey Weitzeil appeared to have injured herself on the finish of Thursday night’s 50 free, in which she set a new Pac-12 Record with the 3rd fastest swim in history (21.03). That was confirmed by Head Coach Teri McKeever on Friday night, who stated that Weitzeil had hyper-extended her arm into the wall.

You can see a video of that race here. After declaring a false start in the 200 free, where she was the 2019 champion, Weitzeil was seen on deck wearing a sling during finals. She then declared a false start in this morning’s 100 free prelims. She was the defending champion there as well.

According to a spokesperson for Cal, Weitzeil is being evaluated on a session-by-session basis, so there’s a remote possibility she could be swimming the 400 free relay tonight, though it seems unlikely. The 50 free was her only individual event here. She had anchored the 400 medley relay in 45.77, the fastest split of her career.

She suffered a similar injury at last season’s NCAA Championships. She had hyper-extended her elbow on the finish of the 200 medley relay as she anchored in what was then the fastest split ever. She went on to finish out the meet with her arm wrapped up, as you can see in the headline photo here.

Ok, so I think this counts as the start of a trend now, right? I would think this would be a pretty easy fix.

I dont know whether to think that was commitment to swimming or that extra reach wasn’t worth it. Anyway, wishing her the best for her recovery and hopefully she’ll be back for NCAAs.

Observation : The last time she hurt herself it was the same injury, in the same race… One was the fastest 50 split on the relay. The other was one of the fastest recorded 50 times in the individual. Both from her finish into the wall…

Is it a safe hypothesis that she is creating so much force and moving through the water at such speed, that her finish is sending shockwaves up the arm. Thus the injury in her elbow, on the arm that she is finishing on….

Personally I think she needs to spend some time after this meet working on finishes that allow her to *safely* absorb the energy of touching that wall.

Kind of wondering why it wouldn’t have been fixed after last year. Yes there is a lot of speed in the 50 and you want to finish on the longest stroke possible but idk if/why anyone would ever try and finish with a completely locked-out elbow. You’d think hurting yourself like that once would be enough to make sure it never happens again

As in not with her elbow hyperextended. She shouldn’t have a problem absorbing the force if her hand/wrist/elbow were in alignment. She’s going 4 mph not 40. Surprised they didn’t work more on that after the last injury. Maybe she did and just had a mental lapse in the heat of the moment.

Hyper-extending is probably the result of locking her elbow out on the finish. High- level swimmers still carry enough energy to dislocate fingers, elbows and shoulders on the touch, it doesn’t always need to be a massive force to cause a freak injury but a pattern of injuries is definitely indicative of technical error

We can just blame Mckever and move on to something else more important like what is the point of having the Big 12 conference meet with only 3 teams.

Blaming McKever is so 2016. I think we’ve moved on to Capitani.

Dressel goes 17.6 and absorbs the energy perfectly. She should watch his finish and roll over movement.

Dressel doesn’t even try to “absorb” it — he spins 180 and ends up back to wall. Why Weitzeil doesn’t do same is a mystery.