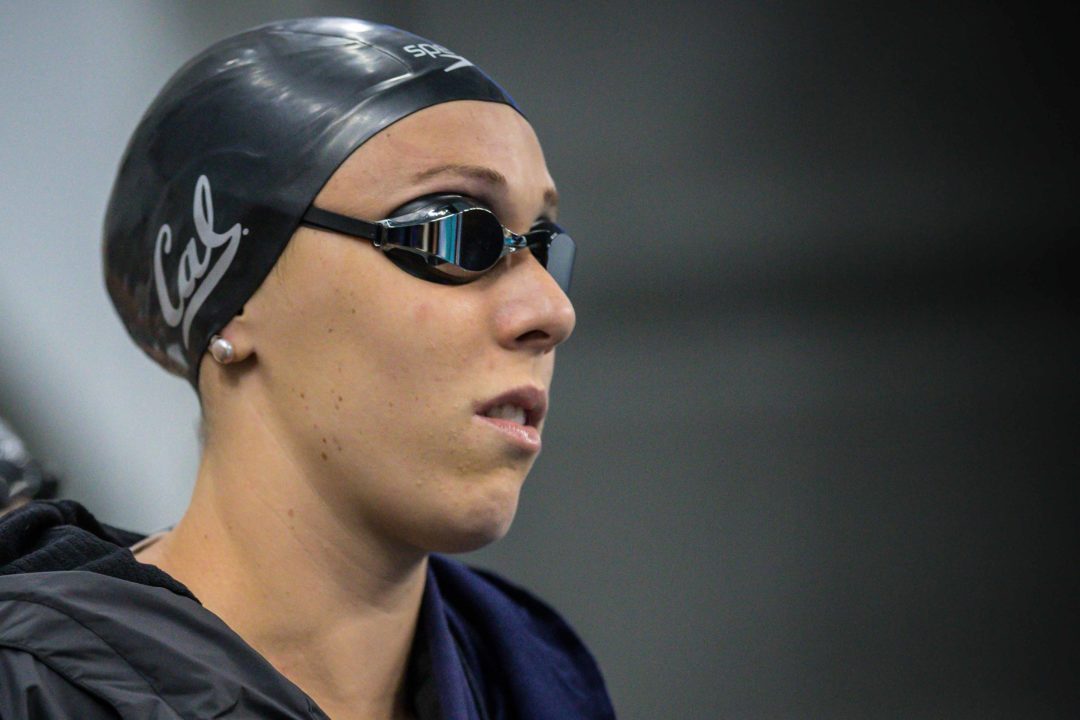 Cal will still have Robin Neumann in the championship heat, but missing the defending champion is a setback for the Bears. Archive photo via Jack Spitser/Spitser Photography

UPDATE 2: Weitzeil was seen on deck wearing a sling Friday night during finals. According to Cal Head Coach Teri McKeever, she hyper-extended her arm on the finish of the 50 freestyle last night.

UPDATE: A spokesperson for Cal has confirmed that Weitzeil injured her arm on the finish of the 50 free last night. She will be evaluated session-by-session to determine her status for the rest of the meet.

After a record-breaking performance in the 50 free on day 1, Cal’s Abbey Weitzeil declared a false start in the 200 free in Friday prelims. Weitzeil was also noticeably absent on the 200 free relay last night, though Cal still won that race by a large margin. That came shortly after Weitzeil set the Pac-12 Meet Record in the 50 free with the 3rd fastest swim in history.

Weitzeil is the only swimmer in the Pac-12 who has broken 1:43 this season. She came into the meet with a season-best 1:42.25. Cal will still have Robin Neumann in the championship heat, but missing the defending champion is a setback for the Bears.

SwimSwam has reached out to a Cal spokesperson for comment.

Cal is currently running 2nd behind Stanford, with USC just 40 points behind. The Trojans also had a setback this morning, as 2nd-seed Laticia Transom, one of the favorites to win this race, was disqualified in prelims. Transom had the fastest split of the field on the 800 free relay. UPDATE: Transom’s DQ has been overturned.

This phenomenon is called Paul Pierceing

Brown never hurts her arm on finishes. Must be a technique thing?

Brown does not swim as fast as Weitzeil!

I think it is a very unintended consequence of her completely straight-arm recovery.

Or a flexibility thing. Weitzeil may have joints that hyperextend more easily.

Noooo. I really hope she recovers quickly and is back for NCAA’s and of course OT. Is it the same arm she injured on the 200 medley relay finish last year at NCAAs?

Damn, can she catch a break??

Apparently not :/ I think she’ll bounce back though. We’re talking about the girl who still swam fast with her lower arm wrapped up at NCAAs last season.

Video doesn’t look great. Hope she can get better. Looking forward to seeing crazy times in March from her.

Watching the video (especially the overhead view), you can see that she locks her elbow and doesn’t absorb any of her momentum, so it all drives straight back up the arm through the wrist and shoulder. It looked painful. It looked like she grabbed her wrist at the very end.

I noticed the same thing, her arm was locked out but she slammed right into the wall. I was more impressed she got a straight arm stroke over in the little distance she had left, I thought she would have glided based on how far from the wall she was on the second-to-last stroke

Dressel and most sprinters spin 180 degrees to their back immediately after the touch to absorb that impact/speed. Sprinters are going so fast now that this is something you need to plan for — can you imagine if 100-meter sprinters in running had to hit a solid wall at the finish?!

It’s primarily for maximum extension, not to absorb the impact. Those sprinters can bench 250lbs easily, do overhead presses, snatches and the rest. The impact of the wall at 4 mph isn’t going to phase them. You finish with your shoulders square to the wall, and you’re gonna lose. Just like touching a basketball rim is easier with one hand than both. They’re taught to finish so their back hits the wall. She must have really hyperextensible elbows that don’t keep the joint and arm in alignment on contact with the wall.