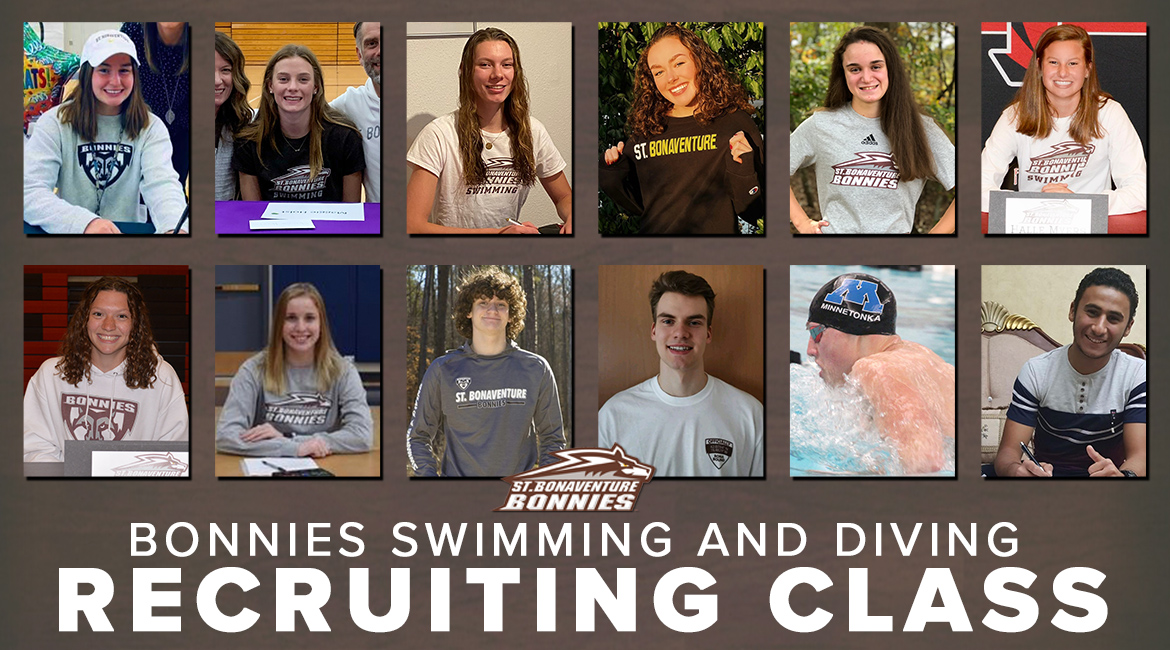 The Bonnies have added 12 swimmers for the 2021-22 season, a group head coach Skip Nitardy has referred to as the "Dynamic Dozen." Current photo via St. Bonaventure Athletics

Delaware Closes Out 2022 With Sweep of West Chester

The Blue Hen men and women both picked up their sixth victory of the season on Friday over West Chester to cap off 2022.

“We are fondly referring to this group at the Dynamic Dozen,” Nitardy said. “This is a great group of kids that will immediately mesh with our culture and add depth to both our men’s and women’s team. We are looking forward to getting them into the water and seeing what they can help us achieve this season.”

Caitlyn Clements joins the Bonnies from Cincinnati, Ohio and competes in the freestyle and backstroke events. While with Saint Ursula Academy, Clements helped the school to GGCL Conference victories in 2019 and 2020. Clements earned first-place in the 50 and 100-freestyle in the 2020 Southwest Sectionals. Clements is studying environmental studies at St. Bonaventure.

Maggie Holst joins Bona’s from Franklin, Tenn. Holst was a backstroke and IM swimmer for Father Ryan High School where she holds the record in the 100-backstroke. Holst also served as a team captain during the 2020-21 season. Holst is a Futures qualifier and a three-time Father Ryan State Team member. Academically, Holst was a member of the Honor Roll, Dean’s List and President’s List. Holst is a health science major at St. Bonaventure.

Joining the Bonnies from Cologne, Germany is Alica Janssen. She joins the program as a freestyle and backstroke swimmer who competed for Deutsche Schule Moskau. Janssen was a finalist in the 50-freestyle in her age division at the German National Championships and took first place in the same event at the State Meet. Alica will be the second Janssen on the Bonnies roster this season, joining her sister Ivana who is a senior. Janssen is an international studies major.

Sophie Haise joins the Brown and White from Charlottesville, Va. where she swam in freestyle, backstroke and breaststroke events for Albemarie High School. She is a three-time Virginia High School League 5A State qualifier and is a two-time VHSL 5A State finalist. In the classroom, Haise was a member of the National Honor Society, Math Honor Society and English Honor Society. Haise is studying health science at St. Bonaventure.

Halle Myers comes to SBU from Erie, Pa. where she was a decorated freestyle and butterfly swimmer for Fairview High School. Myers is a two-time Region and District 10 Swimmer of the Year and holds the District 10 record in the 100-butterfly. Her high school accolades also include 10 district championships and five PIAA championships. In 2021 she was named an Academic All-American and also earn All-American honors in the 200-freestyle relay. Also while at Fairview, Myers was a member of the 2017 cross country state championship team as well as the 2020 tennis state championship team. At St. Bonaventure, Myers is majoring in marketing.

Ellie Kraus joins the swimming program from Erie, Pa. Kraus was a teammate of Halle Myers at Fairview High School, swimming in freestyle events. In 2021, Kraus earned Academic All-America and 200-freestyle relay All-America honors. The 2019 Region 2 Swimmer of the Year, Kraus is an eight-time District 10 Champion and a four-time PIAA State Champion. Kraus is majoring in mathematics at St. Bonaventure.

Madison Kramer hails from Falconer, N.Y. where she competed for Falconer Central School in freestyle, backstroke, butterfly and IM events. Kramer is a two-time NYSPHSAA State Qualifier. She was also the recipient of the Grace M. Dolan Legacy Award. At St. Bonaventure, Kramer is studying biochemistry.

Davis Hutchinson joins the Bonnies from Huntersville, N.C. where he was a diver for Lincoln Charter. He was a three-time team MVP in high school and qualified for the state meet all four years. Hutchinson is a visual arts major at St. Bonaventure.

Joining the Bonnies from Chanhassen, Minn. is Knute Wargin. He swam in breaststroke and freestyle events for Minnetonka High School and was a member of the AB Honor Roll. In the pool, Wargin was a Minnesota State Meet finalist. Wargin is studying finance at St. Bonaventure.