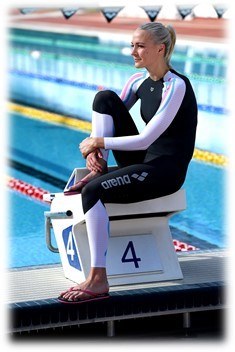 Sweden's Sarah Sjostrom earned her nation's Sports Woman of the Year award for the 2nd consecutive year. Archive photo via courtesy of Arena

The Swedish speedster that is Sarah Sjostrom keeps collecting the accolades, as the 23-year-old Olympic gold medalist earned the Sportswoman of the Year Award this week in Stockholm. Attending the annual Swedish Sports Award gala at the Ericsson Globe Arena yesterday, Sjostrom claimed the honors for the 2nd consecutive year.

Sjostrom won a gold, a silver and a bronze for Sweden in Rio, highlighted by a shiny new World Record in the 100m butterfly. Her 200m freestyle silver came in a showdown with American freestyler Katie Ledecky, while the Swede also managed a bronze medal result in the 100m freestyle.

Taking to social media to express her gratitude for having won the award, Sjostrom also acknowledged a very special guest who was in attendance at the gala. Per Instagram, Sjostrom stated, “This was the most beautiful moment of the swedish athletes gala! Of course I’m proud and happy to win the female athlete of the year award, but it’s nothing compared with how proud I am of my little brother Linus(9y) who presented the award, and I couldn’t stop crying when he made his beautiful speech.”

Well deserved. A powerhouse in the water & a gracious person out. Congratulations Sarah

She is delivering. As well as a swimmer as a person. I am happy to have seen her blossom on my team all the way from the shallow pool.

Sarah Sjostrom is an exceptionally gifted swimmer who needs just a little bit more luck to materialize it in impressive collection of highest quality gold medals. Last year in Kazan she was very close to win five individual gold medals sweeping all sprint disciplines – that could be unprecedented achievement. This year there was a real chance to add to her Olympic gold medal in butterfly several gold medals in freestyle. But what most amazing about Sarah Sjostrom is her ability to be at elite level for 50 through 400 distances. I think that such versatility is even more rare fit than Ledecky’s ability to be world class swimmer from 100 through 1500. It is just her luck that she… Read more »