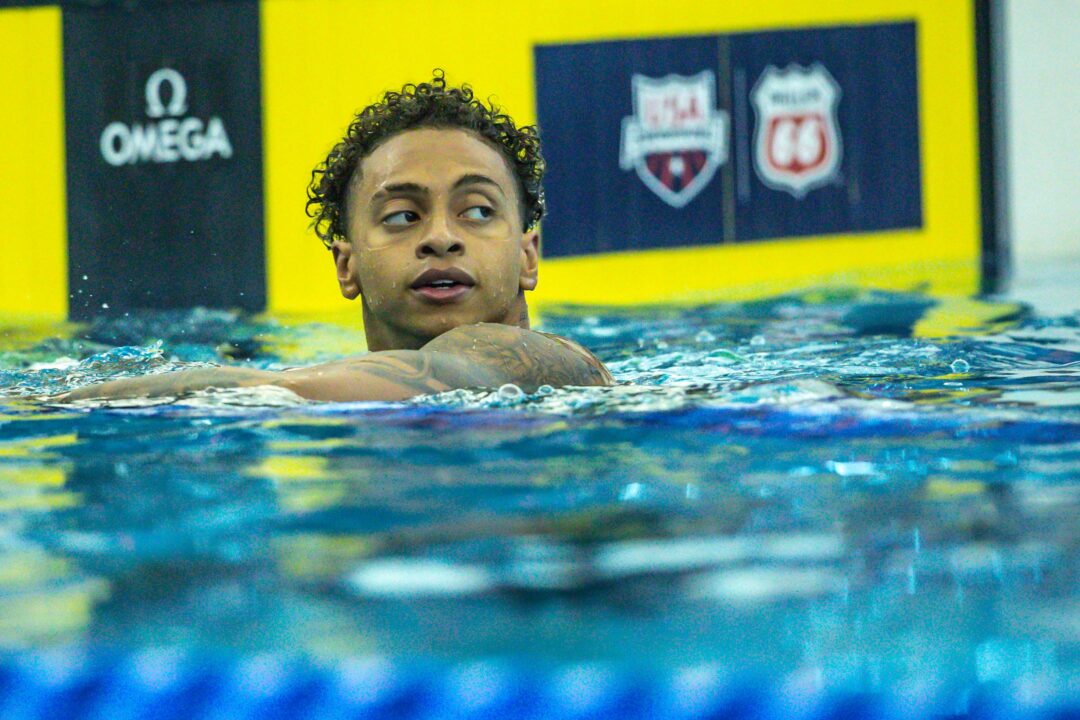 22-year-old Shaine Casas will compete in the 100-meter freestyle, 100 butterfly, and 200 IM next week in Irvine, California.  Archive photo via Jack Spitser/Spitser Photography

The versatile 22-year-old will compete in the 100-meter freestyle, 100 butterfly, and 200 IM in Irvine, California, one month after bringing home a bronze medal in the 200 backstroke from the World Championships in Budapest, Hungary.

Two weeks ago, Casas became the fourth-fastest American ever in the 100 fly by blazing a 50.56 at Austin Sectionals. The time would have earned him silver in the event by Hungary’s Kristof Milak (50.14) at Worlds, nearly four-tenths ahead of runner-up Naoki Mizunuma (50.94). Casas surprisingly scratched the 100 fly ‘A’ final at International Team Trials to avoid a scheduling conflict with the 200 back at Worlds.

This time around, he owns the top-seeded time just ahead of 20-year-old Russian Andrei Minakov (50.88), the former world junior record holder and defending NCAA champion in the event at Stanford. The showdown is the latest test of Casas’ remarkable improvement under one of the best 100 fly coaches in recent history, University of Texas legend Eddie Reese, who mentored stars such as Ian Crocker (former world record holder, two-time world champion) and Joseph Schooling (2016 Olympic champion). Over the past few months, the former Texas A&M Aggie has shaved more than half a second off his personal-best 100 fly mark.

Casas also holds the top-seeded time in the 200 IM with a 1:56.70 from the San Antonio Pro Swim Series in March. He didn’t swim the event at Austin Sectionals two weeks ago, so a significant time could be in store next week.

During a Practice + Pancakes episode back in April, Casas traded friendly jabs with University of Texas training partner David Johnston about who would win potential duels in the 400 IM and 400 free. Naturally, each bet on themselves, and all the trash talk fired Casas up.

“Dude, I’m telling you, if I go to Nationals in Irvine, I’m doing the 4 IM,” he told the 20-year-old Johnston, who’s seeded third in the 400 IM behind Bobby Finke and Max Litchfield.

But unfortunately for fans, that battle will have to wait for another meet. There’s still plenty to look forward to, though, as Casas’ upcoming performance could indicate his odds of contending for four medals on major international stages between both backstrokes, the 100 fly, and the 200 IM.

Minikov should be suspended from USA swimming until Griner is released from Russian prison.

How are those related at all?

I thought this guy was overrated but I was wrong

Dropping the 4IM seems like the smart move. Still would have liked to see it. (Reckon Johnston would win the duel though. 4:14 ish?)

Personally I’d bet on Casas in the 4:11-4:12 range, if he swam it at a serious meet right now… but I’d bet even more that he never ever ever swims it at Nationals or any trials meet.

Hopefully he swims the 200 im this time 😂