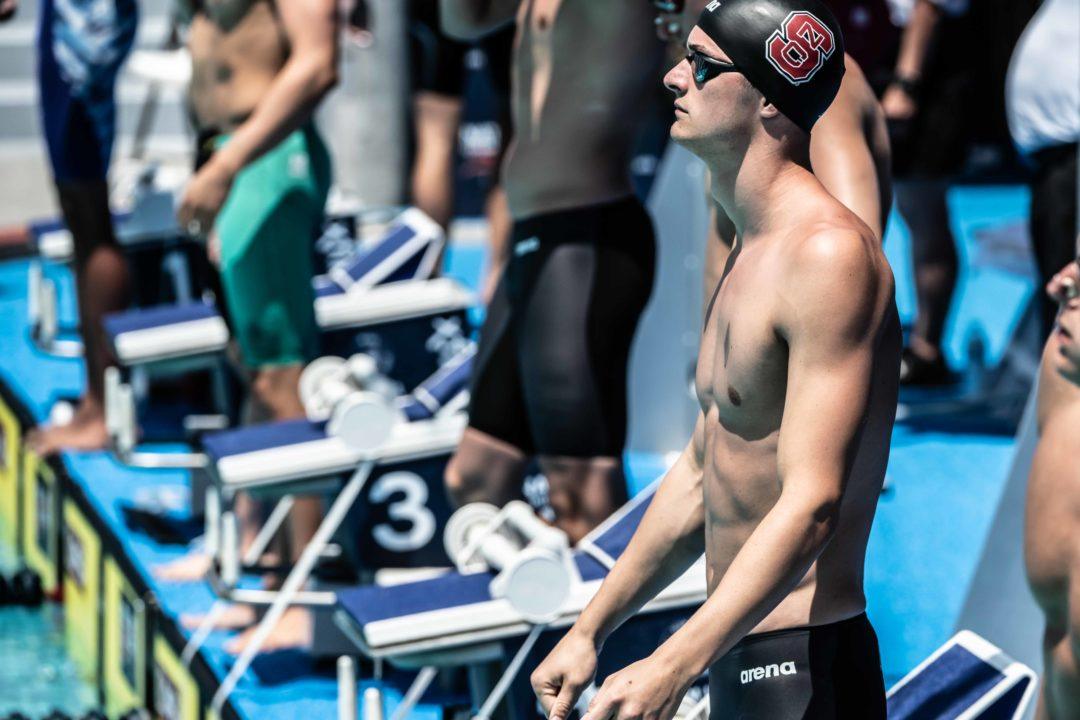 Coleman Stewart, the defending 100 back NCAA champion, scratched out of the long course version of that event as well as the 100 fly for tonight's finals session at the 2018 US Winter National Championships. Archive photo via Mike Lewis/Ola Vista Photography

Coleman Stewart, the defending 100 back NCAA champion, scratched out of the long course version of that event as well as the 100 fly for tonight’s finals session at the 2018 US Winter National Championships.

Stewart had swum a 55.58 in the back and a 54.48 in the fly, which qualified him for A finals. Additionally, Wolfpack swimmer Andreas Vazaios and NC State post-grad Hennessey Stuart bowed out of finals swims tonight. Vazaios was 1:52.20 in the 200 free this morning, while Stuart was 56.36 in the 100 back.

With those scratches, several people will now get to race in A and B finals. Destin Lasco is now set for the 200 free A final after his 1:52.34 this morning, while future NC State swimmer Noah Bowers of Virginia Gators will move up to the 100 fly A final with Stewart’s scratch. In the 100 back, both Gator Swim Club’s Corey Main and UNC-Wilmington’s Will Countie will compete in the A final.

Erika Seltenreich-Hodgson, one of Canada’s top IM’ers, scratched out of the 400 IM A final, allowing for Greenwich’s Meghan Lynch to move to the A final. Lynch, born in 2003, notched an Olympic Trials cut yesterday with a 2nd place finish in the 200 IM B final. She’ll set her eyes on the 4:51.79 standard after going a 4:52 this morning.

The Wolfpack swimmers, of both genders, other than the freshman, seem to be scratching finales for the past two nights.

Maybe it had something to do with classroom finals?

Student athletes. Probably not part of the training plan. Yards more important than meters right know. Nothing to do in Greensboro between sessions. Who knows.