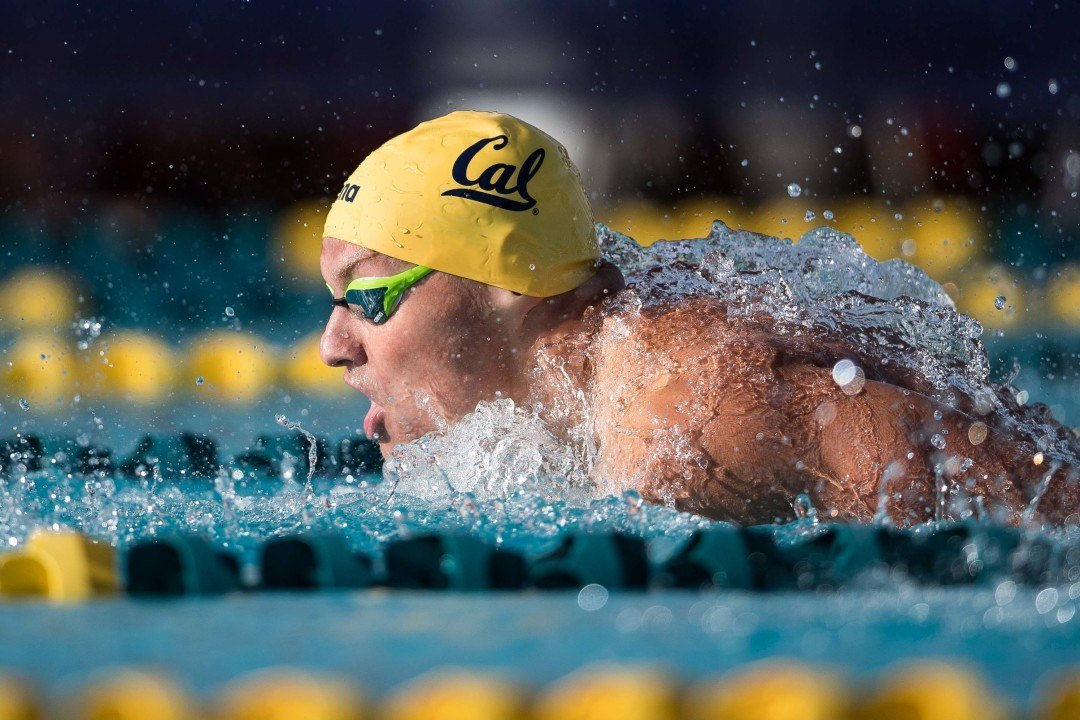 Much of the pre-season conversation about Cal's Andrew Seliskar has been whether he will keep the 200 fly on his NCAA schedule or swap it out for the 200 breast. He swam and won both of those races Saturday against the Utes. Archive photo via Mike Lewis/Ola Vista Photography

Much of the pre-season conversation about Cal’s Andrew Seliskar has been whether he will keep the 200 fly on his NCAA schedule or swap it out for the 200 breast. He swam and won both of those races Saturday against the Utes. Seliskar was the only man to break 1:50 in the 200 fly, breaking ahead of the field to win in 1:49.21. In the 200 breast, he once again finished over 2 seconds ahead of the field, touching in 2:03.26.

All-American Justin Lynch brought home both sprint free victories for Cal. In the 50 free, he out-touched Utah freshman Rodolfo Moreira to win it, 20.83 to 20.91. Fellow All-American Pawel Sendyk (20.91) and freshman standout Ryan Hoffer (21.29) followed. Lynch returned for the 100 free, coming from behind to win in 45.07 ahead of Utah freshman Felix Chiun (45.38).

One of the main things swimming fans have looked forward to is seeing the impact Hoffer will have for the Bears in his freshman season. In his first Pac-12 dual meet, he picked up a pair of 4th place finishes individually, and was a member of the 3rd place 200 medley relay and winning 400 free relay. In addition to taking 4th in the 50 free, he tied for 4th in the 100 fly (51.54).

SALT LAKE CITY, Utah – Wins in 12 of 14 swimming events brought a successful close to a busy week for the Cal men’s swimming team as the Bears earned a 188.5-111.5 dual meet win over Pac-12 foe Utah in Salt Lake City.

One day after earning a dual meet win at Pacific with half the team, the other half dove back into action in another time zone as the Bears squared off with the Utes. And, Cal wasted no time getting to the wall first as the quartet of Matthew Josa, Connor Hoppe, Justin Lynch and Pawel Sendyk swam to a time of 1:28.95 to win the 200-yard medley relay.

The Bears put the cap on a good day in the pool with a win in the 400 free relay as the team of Ryan Hoffer, Jensen, Seliskar and Lynch swam to a time of 3:00.22 to earn the victory. Cal and Utah also did battle in diving with sophomore Connor Callahan placing second in both the 1 and 3-meter while freshmen Jackson Gabler and Johnny Robinson also made their Cal debuts.

Several Cal swimmers return to action on Oct. 21 and 22 as a group of Bears will travel to Los Angeles to compete for Team Pac-12 against a Team USA squad that will include a quartet of Cal post-grads in the USA College Challenge. Cal’s full squad will next be in action on Nov. 10 when the Bears host Stanford in the annual Triple Distance Meet.

SALT LAKE CITY – Senior Nathan Makarewicz was able to give the Utes a strong individual performance on the boards, but Utah fell short in a meet against No. 1 Cal, 188.5-111.5.

“Today could have gone better,” head coach Joe Dykstra said. “We had some standout individual performances but I’m a little disappointed we were not better as a team. We have big aspirations for this year, but obviously, Cal is ranked number one for a reason.

We showed that we could race with them, we just did not show that we could beat them consistently. That’s the next step for our program. We cannot be happy with being close. We need to get wins. We got four of them today and next year when we go to Berkley hopefully we can get six or seven.”

Freshman Felix Chiun also placed second in a competitive 100 free, clocking in at 45.38. Daniel McArthurwas also able to complete a second-place finish in the 200 IM, finishing in 1:53.56.

The final win of the day came for the Utes came in the 500 free, as Brandon Shreeve clocked in with a final time of 4:34.88.

The University of Utah swimming and diving team will be back in action on Friday, Oct. 20th, against No. 3 Stanford. The meet will be held at the Utah Natatorium and is set to start at 2 p.m.

SLC is at altitude, which probably accounts for the times being relatively slow across the board. Wait til this weekend to see some of how the Cal (and Utah) guys look

Pretty sure altitude doesn’t affect the 50 free much. While Dressel and Schooling are putting up 19 lows, Hoffer is putting up a 21.29?

I can’t believe I’m defending Cal, but who on earth knows where they are at this point in the season. They should be absolutely cashed right now, and altitude definitely didn’t help. Dressel and Schooling have already proven that they’re superhuman. They’ve performed at the highest level and won. Treating them as the norm seems a little off. Hoffer is a talented guy, but he might not be experienced enough to bring the heat when it’s the middle of Rocktober.

Maybe Hoffer can only get it done at invites and that’s okay cause that’s when it really matters, when the time comes he will be ready and will qualify

Starting out the season two seconds behind medalists in the 50 free (Dressel and Schooling have both already been 19 low) is not a good place.

Keep in mind pretty much nobody goes 19 low to start the season. Dressel obviously in an anomaly and it’s unfair to compare his performance with a kid in his second month of college. That is a hard transition for anybody

Vote Up70Vote Down Reply
JP input is too short

Good. Hope he has a great year.

maybe they hit the weight room as a warm up

Or at each wall.