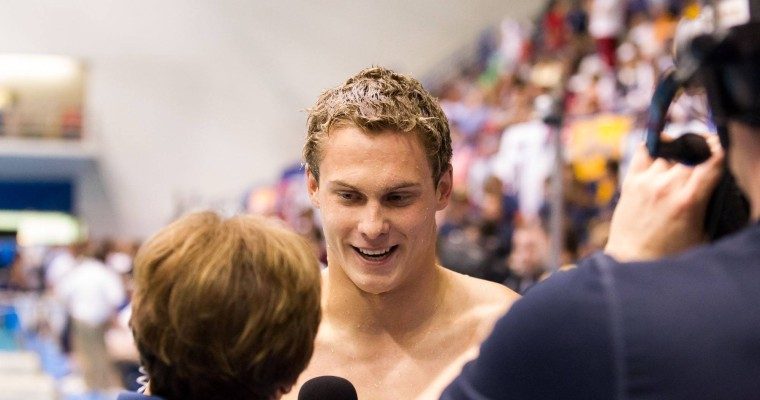 Vladimir Morozov qualified for the Olympics tonight in the 50 free, clocking 22.01 in the final. Current photo via Tim Binning/TheSwimPictures.com

Braden Keith contributed to this article.

The 7th and second-to-last finals session of the 2016 Russian National Championships was the shortest of the meet, with just one semi-finals and two of the day’s 5 races being the 50 freestyles.

In what has been a rare occurrence this week, three swimmers went under the Russia selection standard for the 2016 Olympic Games. Only two can swim in Rio, though, and those two are Daria K. Ustinova, who won in 2:06.92, and Anastasia Fesikova, who won in 2:08.74.

For the 17-year old Ustinova, that’s a new lifetime best by three-tenths of a second, and beat out Anastasia Fesikova, the former Anastasia Zueva, who is the Russian National Record holder in the event. Fesikova, who took silver in the event at the London Olympic Games, has disappeared from swimming since then, but now has reemerged and earned a spot on the Russian Olympic Team.

Irina Prikhodko finished 3rd, leaving her one spot out of the Olympics now in both the 100 and 200 meter backstrokes.

After the retirement late last week of Evgeny Korotyshkin, the Olympic silver medalist in the 100 fly, there was some uncertainty in the men’s 100 fly about who would carry the torch for Russia both individually and in relays. Aleksandr Sadovnikkov put those questions to rest with a very solid 51.50 to win and come within two tenths of Korotyshkin’s national record. Sadovnikkov was well under his previous personal best of 52.17 from last summer’s World University Games.

Along with Sadovnikkov, Evgeny Koptelov will make the Olympic team as he was under the standard of 52.16 in 52.05. Koptelov won the World University Games last summer in the same time Sadovnikkov won with today, 51.50.

Not surprisingly no Russian woman will swim the 800 free at the Olympics, as they didn’t manage to get under the standard of 8:28.98. Russia had no women represent them in this event at the World Championships last summer. Arina Openysheva touched 1st in 8:33.91, dropping over ten seconds from her best time. Anastasiia Kirpichnikova was a distant 2nd in 8:38.38, and Anna Egorova was 3rd in 8:41.13.

Despite two quick swims in the prelims (21.75) and semi-finals (21.69), Russian record holder Vladimir Morozov had his slowest swim of the three in the final touching in 22.01. Morozov still finished 1st, and hit the Olympic selection standard right on the nose to qualify for Rio in this event. Morozov’s time of 21.69 from the semi-finals is a good sign for him going forward.

No other men managed to attain the standard, with 2nd place Aleksei Brianskii touching in 22.16. Andrey Grechin was 3rd in 22.19 after having a great 100 free, and Sergei Fesikov was 4th in 22.20. The biggest surprise in this event has to be Evgeny Sedov, who didn’t make it out of the prelims despite a best time under 22 seconds.

Rozaliya Nasretdinova leads the women into the 50 free final tomorrow night after putting up a time of 24.90 in the semi-finals, the only woman under 25 seconds. Nasretdinova’s swim sets her up to get under the 24.99 standard tomorrow night and make the team.

She has over three tenths of a second advantage heading into the final, as 2nd place Natalia Lovtcova was back in 25.22. The final will be all about breaking 25 seconds for Nasretdinova.

Top 8 Heading to the Final:

http://www.liveleak.com/view?i=d90_1461427675
I’m surprised that SwimSwam has yet to report on the Russian Team qualifier in the inflatible duck race…

Your surprise is warranted, because we did, 23 hours ago. http://swimswam.com/video-man-in-rubber-duck-inner-tube-jumps-in-pool-at-russian-trials/

Stephen I really want to see Mel comment if not all top 6 goes 47 as he predicted. Nothing personal Mel!

Irish Ringer, I’m pretty sure that USA would be very happy to have Vlad Morozov in its 4X100 free relay.
USA is not full of 47 high/48 low flat start sprinters right now. Adrian, maybe Dressel at trials.

Bobo how dare you some readers are expecting all top 6 guys swimming 47 easily and the top 2 showing mcevoy a lesson!!!

47’s????? Must be bring back the Super suits….I think ive even heard 46’s by some delusional Americans on here.

Nah the second place finisher to ledecky at the US trials in the 800 free won’t be a “distant 2nd”. That,s an understatement. She,ll be more like an “insignificant” 2nd.

Morozov 21.94 to his feet in Barcelona in the 100m finals, 22.01 to a touch here. Whats been going on with him? He’s put up some decent times recently, but there was absolutely nothing special about his swim here, and you can tell he felt the same way based on his expression after the race. The world needs more sprinters like him to show that you don’t need to be 6’4″ and built to be insanely fast

To say Anastasia was a ‘distant 2nd’ to Arina over 800 metres has me wondering how you are going to describe the 2nd place getter behind Ledecky at US Trials.

Currently it looks something like 15 secs & visually 1/2 the length of the pool. #2ndplacegettermatter

It’s a good thing Vlad chose Russia over the US because those times wouldn’t fly the states.

Uh…48.09 would have won 4 years ago in Omaha. Vlad has also split 46 with a rolling start.
He might not win a medal, but pretending the US couldn’t use him is dishonest.

They really chased Vlad down on that second 50. He won’t even final in Rio.