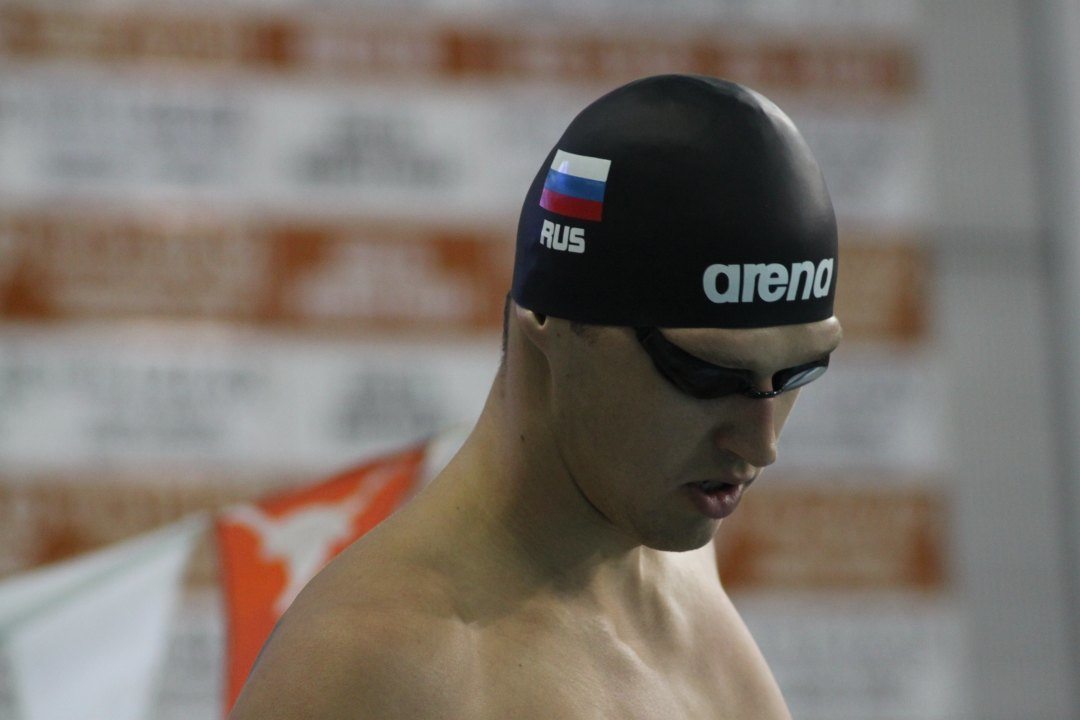 Russian swimmer Nikita Lobintsev has been cleared on Meldonium charges, but is still ineligible for the Olympics pending any appeals. Archive photo via Andy Ringgold/Aringo Photography

Lobintsev is at least the 3rd Russian swimmer in 2016 to test positive for Meldonium, which was not outlawed by the World Anti-Doping Code until January 1st, 2016. The World Anti-Doping Association (WADA) has made allowances for the fact that there isn’t enough research on how long it takes Meldonium to clear the body and said that anyone who tests positive through September won’t be penalized.

All three swimmers, all of whom were on Russia’s initial Olympic roster, have been handed a no-fault finding.

Lobintsev was originally a member of the 35 swimmer roster approved by the Russian Olympic Committee for this year’s Rio Games; however, he was one of 7 that FINA has announced have been removed from that roster.

Lobintsev, now 27, says he was first recommended Meldonium at age 19 by the Russian national swimming team doctor “to protect his heart during strenuous training for competitions,” a common claim from Russian athletes who have taken the substance.

Lobintsev says on the doctor’s advice, he continued taking the drug once a year, obtaining it over-the-counter in Russia. He admitted to using it in August of 2015 after the World Championships and again in late September, saying that his use ended “on or around October 3, 2015,” according to USADA.

“We have seen a trend of medical practitioners advising apparently healthy, young athletes in 2015, before meldonium was included on the WADA Prohibited List, to use this pharmaceutical product in connection with athletic training and performance,” said USADA CEO Travis T. Tygart. “The disturbing pattern of use associated with this performance-enhancing drug appears to be one more example of a growing practice in sport in which coaches ask for, physicians prescribe, and athletes use pharmaceuticals not for their primary purpose of health and safety, but to enhance athletic performance.”

The matter becomes convoluted thereafter, as each of the three Russians who have tested positive for Meldonium this year have a slightly different circumstance.

All that to say that Lobintsev, despite being cleared on his Meldonium test, is still not eligible for the Olympics, barring any successful appeals.

“Lobintsev says on the doctor’s advice, he continued taking the drug once a year, obtaining it over-the-counter in Russia. He admitted to using it in August of 2015 after the World Championships and again in late September, saying that his use ended “on or around October 3, 2015,” according to USADA.”

So he took it once a year, as well as in August, September and October of 2015. Okay!

Before being sarcastic and ridiculing accomplished swimmer you’d better figure out first how long is one year in Lobintsev’s calendar.

Doesn’t matter, a cheater is a cheater.

It was a joke. Sorry for confusing you by not putting “smiling face” at the end. 🙂

what’s wrong with cheatin once in a while?

So he is a confessed cheat. His claim to have taken meldonium once a year is close to unbelievable. It tends to reinforce the fiction that dopers were caught just that time when they cheated.

Furthermore, the drug manufacturer recommends taking the drug for 4 to 6 weeks, 2 to 3 times a year. I realize that Lobintsev didn’t suffer from heart troubles, still, once a year sounds preposterous.

another Salo swimmer? how many does that make?

Please esplain to us all how this is Salo’s fault? He preaches no supplementation to all his athletes. These Russians are part of systematic doping from their COUNTRY. Not university. Do you really believe any top coach in America would knowingly allow drug cheats to train under them??

Did I miss anyone?

Attila, google Kicker Venci and read his story. He seems to have been vindicated in the lawsuit against the supplement manufacturer, albeit too late to salvage his swimming career.

Attila did not mention the intentions of the athletes, just the outcome. I don’t believe anyone sane wants to drag swimmers or coaches down, instead solve the problem.

Still poor Vencill’s even poorer competitors faced a possibly illegitimate enhanced athlete. A lot of Western European clubs (and American teams) would not be OK with any supplement ingestion, since it is a risk.

Could the USC problem would be linked to the campus nutrition store?

This is no big surprise. There are a lot of Russian swimmers that come over here and once they get away from their doctor systems they are not performing yet get them back in the system they improve rapidly.